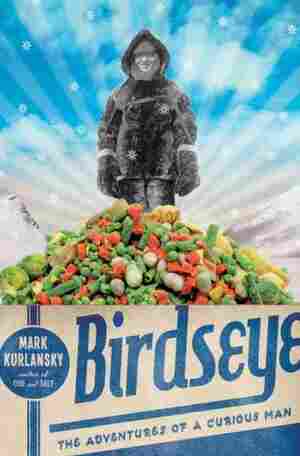 Book Party For One: A Loner's Summer Survival Guide

June 11, 2012 • Summer is a trying time for introverts, what with the barbecues and the graduations and the picnics by the pool. If you'd always choose a good book over a good party, critic Maureen Corrigan has a list for you.

Book Party For One: A Loner's Summer Survival Guide 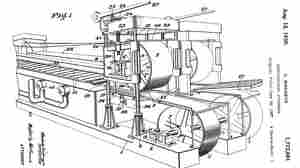 May 18, 2012 • Clarence Birdseye's life as a taxidermist, fur trader, hunter, and fish lobbyist all led to his creation of the modern frozen food industry. His inventions made frozen food tastier and more widely available to consumers.

May 6, 2012 • Before locavores and the "slow food" movement, one man's invention radically transformed how (and what) we eat. In his new book, Mark Kurlansky shows us the curious, roving mind that made TV dinners possible.

The lobster boats made in Deer Isle, Maine, in the 1940s and 1950s were cumbersome vessels with rounded wooden hulls that made them roll in the slightest swell. Even on a flat sea they were hard to direct, and a steady course could only be achieved by spinning the wheel far to starboard, then, when the bow started to shift, spinning it back far to port. If it was done right, the result could be a straight line, but this was not easy to accomplish. Heading into the wind was impossible, so the boat had to be steered at angles like a tacking sailboat.

In 1956, Sarah Robbins had just bought such a boat and kept it by her home in the old fishing port of Gloucester, Massachusetts. She had not in the least mastered the stubby

thirty-five-foot craft when she offered to take her friend Clarence Birdseye on his last adventure. Though Birdseye was more than a generation older, their friendship had been inevitable. They both lived on the fog-swept opening of Gloucester Harbor, an area called Eastern Point, and they were both self-taught naturalists. She had bought the lobster boat to aid her in bird-watching, an interest she shared with Birdseye.

Birdseye, a tiny man, smaller than many of the kids in the neighborhood, with a bland, gray appearance and the dull nickname Bob, was a source of endless fascination in affluent Eastern Point. It was not just that he was famous. Or that he had lived a life of adventure and was full of stories about the Rocky Mountains and the Southwest at the beginning of the twentieth century and the wild frozen frontier of Labrador before World War I. It was that he seemed to be interested in almost everything and knew a great deal about most of it.

"If I see a man skinning a fish, for example," he wrote about himself in 1951 in The American Magazine, "a host of questions pop into my mind. Why is he skinning the fish? Why is he doing it by hand? Is the skin good for anything? If I am in a restaurant and get biscuits, which I like, I ask the chef how he made them: What did he put in the dough? How did he mix it? How long did the biscuits bake? At what temperature? When I visit a strange city, I go through the local industrial plants to see how they make things. I don't care what the product is. I am just as much interested in the manufacture of chewing gum as of steel."

Birdseye died with more than two hundred patents to his name on more than fifty ideas, and though the obituaries called him "the father of frozen food," his inventions ranged from a whaling harpoon to electric lightbulbs. A few of his inventions changed the course of the twentieth century. But it is almost as telling to know that when this enthusiastic and insatiably curious man died, his final mourners were not the captains of finance and industry with whom he worked, nor fellow inventors and thinkers, but the children who grew up in his neighborhood.

When Josephine Swift Boyer was a child in California, her family spent summers at their home on Eastern Point. Like a number of girls in the neighborhood, she took up an interest in birds. When she found a dead rail, a rare specimen for Gloucester, she wanted to keep it, and not knowing what to do, she went to the curious Mr. Birdseye. Not surprisingly, he turned out to be a skilled and experienced taxidermist. He had the right tools and chemicals, and he showed her how to open it and rub it with preservatives and stuff it. The girls, now older women, still remember what delicate and skillful hands he had. Josephine's sister, Lila, said that her clearest memory of him was his fine hands. A reporter from the New York Post, interviewing him in 1945, wrote that he had "powerful hands," which is a surprising feature for such a small man.

A family man with four children, he liked helping and talking to young people. "He was very pleasant and easy for a youngster to talk to," said Nancy Ellis, who also knew him as a girl growing up in Eastern Point.

"He was a character," Lila said. "You couldn't help being fascinated by him." He was always building strange things in his large, high-ceilinged basement, or in the kitchen, or even on the lawn of the stately seventeen-room mansion he had built. He was a hunter and was known as a man who would shoot, freeze, dehydrate, or just eat almost anything. Lila, who loved birds and, even in her old age, nursed wounded ones back to health, recalled a strange contraption on Birdseye's lawn. "It was for capturing starlings. That elegant house, and he sat by the pillars ready to pull a string and catch the starlings. We always thought he was going to eat them, probably fast frozen, taste tested for some experiment. In any case we knew they were goners."

Birdseye's wife, Eleanor, was more reserved. But she had been with him for more than forty years, from Labrador to Peru. She too had great curiosity and boundless enthusiasm and a sense of adventure that she probably inherited from her father, one of the founders of the National Geographic Society. Dotty Brown, an Eastern Point girl who knew the family well because she was a close friend of Henry, one of the Birdseye sons, said of Clarence and Eleanor, "They were a devoted couple ... They were interested in everything. Everything was grist for his mill. He had to know how things grow and what their name is. He didn't just sit around reading the newspaper. Mrs. Birdseye was a little shy, but Mr. Birdseye was outgoing. You couldn't be shy and find things out. He was always asking questions."

Birdseye once said, "Enthusiasm and hard work are also indispensable ingredients of achievement." Perhaps he had too much of both, for he developed a heart condition and often ignored doctors' advice to ease up. On October 7, 1956, Birdseye died of heart failure in his New York City apartment.

Birdseye had requested that he be cremated and that his ashes be scattered past the breakwater where Gloucester Harbor opened to the North Atlantic. It was for this purpose that Sarah Robbins's clumsy Deer Isle lobster boat had been called into service. Sarah was at the wheel, desperately trying to steer a straight course. Eleanor Birdseye stood formally at the stern with Dotty Brown and Lila Monell. At the bow was the son Henry Birdseye, holding a white ceramic urn with the ashes of his father inside. Sarah managed to stay off the granite blocks of the breakwater and sail out of the harbor opening and hard aport to the open Atlantic, following the route, albeit with a few more curves and zigzags, sailed by hundreds of thousands of Gloucester fishermen since the town became a fishing port in 1623.

stories. They used to call him Birdseed. Also like his father, he had a bent for science and borrowed a corner of the basement laboratory to build his own chemistry lab. Like his father, he had an entrepreneurial side and became an expert scuba diver, operating a salvage business around Gloucester Harbor. During World War II, he was a decorated soldier in the Pacific and later became an avid flier, geologist, and amateur astronomer.

But Birdseed at the bow did something unexpected in front of his mother and old friends. He ceremoniously tossed the white ceramic urn into the graygreen Atlantic without opening it to scatter the ashes. The problem was that it did not sink. It floated and bobbed like a white lobster buoy.

"Break it, break it!" Dotty and Lila shouted hoarsely, trying to get his attention without Mrs. Birdseye noticing from the stern. If the urn was left to float, it would surely wash onto one of the popular beaches along what was called the Back Shore. Who would find it? What would happen to it? Would this be one of those slightly weird local stories in the Gloucester Daily Times?

"Break it!" Dotty shouted again, handing him the boat hook while Lila retreated to the stern to keep Mrs. Birdseye occupied. Sarah turned her wheel wildly, trying to bring the boat about to give Henry a shot at the urn. He poked at it, but it didn't break, and she had to make another pass. Turning circles in a boat that will not head into the wind is no small task. But the urn would not break. Meanwhile, Lila was chatting with Mrs. Birdseye, hoping she did not notice her son jabbing at the sea. Finally, Henry was able to get the right angle to crack the urn with a blow from his hook, and the last of Clarence Birdseye drifted into the tide like plankton.

Had Clarence Birdseye been there in the flesh observing all this, he probably upon landing would have hopped into one of his three cars, driven downtown to a hardware store to buy a few things, and retired to his basement to build either the fast-breaking funeral urn or the quick-sinking one and then would have patented it, certain that in the future millions would end their days in a Birdseye urn. That's who he was, a man who observed how things worked and figured out how to make them work better.

"He always wanted to improve something," said Lila Monell.

When he was born in Brooklyn not quite seventy years earlier, there had been little to suggest what an adventure his life would be. But when he heard people comment on what an improbable adventure his life was, he would shrug and say, "I was just very curious."

From Birdseye: The Adventures of a Curious Man by Mark Kurlansky. Copyright 2012 by Mark Kurlansky. Excerpted by permission of Doubleday, a division of Random House Inc. All rights reserved. No part of this excerpt may be reproduced or reprinted without permission in writing from the publisher.