Sham Yes ap Soorap travels the endless rails of the railsea, hunting giant moles with a captain who can think only of the ivory-coloured mole she's been chasing since it took her arm many years ago. When they come across a derelict train, Sham finds some mysterious pictures that soon have him hunted on all sides by pirates, trainsfolk, monsters and salvage-scrabblers. 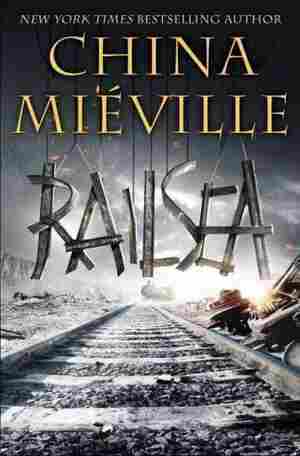 May 10, 2012 • The new novel reimagines Moby-Dick in a future where the oceans have become barren wastelands teeming with fantastical carnivores, and crisscrossed by a network of railroads.

Here. Weeks out, back when it was colder. The last several days spent fruitlessly pootling through rock passes & in the blue shadows of ice cliffs, late afternoon under a flinty sky. The boy, not yet bloodstained, was watching penguins. He stared at little rock islands furred in huddled birds plumping their oily feathers & shuffling together for comfort & warmth. He'd been giving them his attention for hours. When at last there came a sound from the speakers above, it made him start. It was the alarm for which he & the rest of the crew of the Medes had been waiting. A crackling blare. Then from the intercom came the exclamation: "There she blows!"

An instant frantic readiness. Mops were abandoned, spanners dropped, letters half-written & carvings half-whittled were thrust into pockets, never mind their wet ink, their sawdusty unfinishedness. To windows, to guardrails! Everyone leaned into the whipping air.

The crew squinted into the frigid wind, stared past big slate teeth. They swayed with the Medes's motion. Birds gusted nearby in hope, but no one was throwing scraps now.

Way off where perspective made the line of old rails meet, soil seethed. Rocks jostled. The ground violently rearranged. From beneath came a dust-muffled howl.

Amid strange landforms & stubs of antique plastic, black earth coned into a sudden hill. & up something clawed. Such a great & dark beast.

Soaring from its burrow in a clod-cloud & explosion it came. A monster. It roared, it soared, into the air. It hung a crazy moment at the apex of its leap. As if surveying. As if to draw attention to its very size. Crashed at last back down through the topsoil & disappeared into the below.

Of all the gapers on the Medes none gaped harder than Sham. Shamus Yes ap Soorap. Big lumpy young man. Thickset, not always unclumsy, his brown hair kept short & out of trouble. Gripping a porthole, penguins forgotten, face like a light-hungry sunflower poking out of the cabin. In the distance the mole was racing through shallow earth, a yard below the surface. Sham watched the buckle in the tundra, his heart clattering like wheels on tracks.

No, this was not the first moldywarpe he'd seen. Labours, as their playful groups were called, of dog-sized specimens constantly dug in Streggeye Bay. The earth between the iron & ties of the harbour was always studded with their mounds & backs. He'd seen pups of bigger species, too, miserable in earthtanks, brought back by hunters for Stonefacemas Eve; baby bottletop moldywarpes & moonpanther moldywarpes & wriggly tarfoot moldywarpes. But the great, really great, the greatest animals, Sham ap Soorap had seen only in pictures, during Hunt Studies.

He had been made to memorise a poemlike list of the moldywarpe's other names — underminer, talpa, muldvarp, mole. Had seen ill-exposed flatographs & etchings of the grandest animals. Stick-figure humans were drawn to scale cowering by the killer, the star-nosed, the ridged moldywarpe. & on one last much-fingered page, a page that concertinaed out to make its point about size, had been a leviathan, dwarfing the specklike person-scribble by it. The great southern moldywarpe, Talpa ferox rex. That was the ploughing animal ahead. Sham shivered.

The ground & rails were grey as the sky. Near the horizon, a nose bigger than him broke earth again. It made its molehill by what for a moment Sham thought a dead tree, then realised was some rust-furred metal strut toppled in long-gone ages, up-poking like the leg of a dead beetle god. Even so deep in the chill & wastes, there was salvage.

Trainspeople hung from the Medes's caboose, swayed between carriages & from viewing platforms, tamping out footstep urgency over Sham's head. "Yes yes yes, Captain ... ": the voice of Sunder Nabby, lookout, blurted from the speakers. Captain must have walkie-talkied a question & Nabby must have forgotten to switch to private. He broadcast his answer to the train, through chattering teeth & a thick Pittman accent. "Big boar, Captain. Lots of meat, fat, fur. Look at the speed on him ... "

The track angled, the Medes veered, the wind fed Sham a mouthful of diesely air. He spat into railside scrub. "Eh? Well ... it's black, Captain," Nabby said in answer to some unheard query. "Of course. Good dark moldywarpe black."

A pause. The whole train seemed embarrassed. Then: "Right." That was a new voice. Captain Abacat Naphi had patched in. "Attention. Moldywarpe. You've seen it. Brakers, switchers: to stations. Harpoonists: ready. Stand by to launch carts. Increase speed."

The Medes accelerated. Sham tried to listen through his feet, as he'd been taught. A shift, he decided, from shrashshaa to drag'ndragun. He was learning the clatternames.

Sham spun. Dr. Lish Fremlo stared at him from the cabin threshold. Thin, ageing, energetic, gnarled as the windblown rocks, the doctor watched Sham from beneath a shag of gun-coloured hair. Oh Stonefaces preserve me, Sham thought, how bleeding long have you been there? Fremlo eyed a spread of wooden-&-cloth innards that Sham had lifted from the hollow belly of a manikin, that he should by now certainly have labelled & replaced, & that were still all over the floor.

"Oh." Fremlo winced at the fresh cuts Sham had doodled with his penknife in the model's skin. "What unholy condition are you giving that poor thing, Sham ap Soorap? I should perhaps intervene." The doctor put up a peremptory finger. Spoke not unkindly, in that distinct sonorous voice. "Student life is not scintillating, I know. Two things you'd best learn. One is to" — Fremlo made a gentle motion — "to calm down. & another is what you can get away with. This is the first great southern of this trip, & that means your first ever. No one, including me, gives a trainmonkey's gonads if you're practicing right now."

Sham gasped at the cold. Most of the crew wore furs. Even Rye Shossunder, passing him with a peremptory glance, had a decent rabbitskin jerkin. Rye was younger & , as cabin boy, technically even lower in the Medes order than Sham, but he had been at rail once before, which in the rugged meritocracy of the moletrain gave him the edge. Sham huddled in his cheap wombatskin jacket.

Crews scrambled on walkways & all the carriagetop decks, worked windlasses, sharpened things, oiled the wheels of jollycarts in harnesses. Way above, Nabby bobbed in his basket below the crow's-nest balloon.

Boyza Go Mbenday, first mate, stood on the viewing dais of the rearmost cartop. He was scrawny & dark & nervily energetic, his red hair flattened by the gusts of their passage. He traced their progress on charts, & muttered to the woman beside him. Captain Naphi.

Naphi watched the moldywarpe through a huge telescope. She held it quite steadily to her eye, despite its bulk & despite the fact that she hefted it one-handed in a strong right arm. She was not tall but she drew the eyes. Her legs were braced in what might have been a fighting stance. Her long grey hair was ribboned back. She stood quite still while her age-mottled brown overcoat wind-shimmied around her. Lights winked in her bulky, composite left arm. Its metal & ivory clicked & twitched.

The Medes rattled through snow-flecked plainland. It sped out of drag'ndragun into another rhythm. By rock, crack & shallow chasm, past scuffed patches of arcane salvage.

Sham was awed at the light. He looked up into the two or more miles of good air, through it into the ugly moiling border of bad cloud that marked the upsky. Bushes stubby & black as iron tore past, & bits of real iron jagging from buried antique times did, too. Atangle across the whole vista, to & past the horizon in all directions, were endless, countless rails.

Long straights, tight curves; metal runs on wooden ties; overlapping, spiralling, crossing at metalwork junctions; splitting off temporary sidings that abutted & rejoined main lines. Here the train tracks spread out to leave yards of unbroken earth between them; there they came close enough together that Sham could have jumped from one to the next, though that idea shivered him worse than the cold. Where they cleaved, at twenty thousand angles of track-meets-track, were mechanisms, points of every kind: wye switches; interlaced turnouts; stubs; crossovers; single & double slips. & on the approaches to them all were signals, switches, receivers, or ground frames.

The mole dove under the dense soil or stone on which sat those rails, & the ridge of its passage disappeared till it rose again to kink the ground between metal. Its earthwork wake was a broken line.

The captain raised a mic & gave crackling instructions. "Switchers; stations." Sham got another whiff of diesel & liked it this time. The switchers leaned from the walkway that sided the front engine, from the platforms of the second & fourth cars, brandishing controllers & switchhooks.