Peter Hatch traces the history of Thomas Jefferson's vegetable garden, which has been painstakingly restored by the author, from the artichokes and asparagus first planted in 1770 through the horticultural experiments of Jefferson's retirement years.

NPR stories about A Rich Spot of Earth 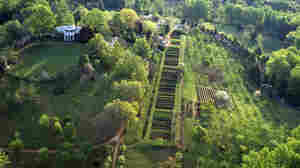 May 10, 2012 • Thomas Jefferson's garden was a vast, beautiful science experiment involving over 300 varieties of 90 different plants. And no gardening detail was too small for Jefferson to note in the gardening journal he kept for nearly 60 years.

Excerpt: A Rich Spot Of Earth

In 1811, Thomas Jefferson, retired from the presidency to his lifelong home at Monticello, wrote to the Philadelphia portrait painter Charles Willson Peale a transcendent anthem to the garden:

I have often thought that if heaven had given me choice of my position and calling, it should have been on a rich spot of earth, well watered, and near a good market for the productions of the garden. No occupation is so delightful to me as the culture of the earth, and no culture comparable to that of the garden. Such a variety of subjects, some one always coming to perfection, the failure of one thing repaired by the success of another, and instead of one harvest a continued one thro' the year. Under a total want of demand except for our family table I am still devoted to the garden. But tho' an old man, I am but a young gardener.

Jefferson's elegantly composed fantasy of an alternative career as a market gardener is well known because it resonates with gardeners from all ages. The image of repeated harvests through the season suggests the hopefulness inherent in the gardening process. Thomas Jefferson's garden during his retirement from public life at Monticello, 1809–1826, was the terraced vegetable garden, a thousand- foot- long experimental laboratory overlooking the rolling Piedmont Virginia countryside. This was the chief horticultural achievement of Thomas Jefferson's tenure at Monticello, itself described as his autobiography in the way its architecture and gardens expressed the multifaceted intellect of the author of the Declaration of Independence.

Thomas Jefferson's Monticello vegetable garden was a revolutionary American garden. Many of the summer vegetables we take for granted today — tomatoes, okra, eggplant, lima beans, peanuts, peppers — were slow to appear in North American gardens around 1800. European travelers commented on the failure of Virginia gardeners to take advantage of "the fruitful warmth of the climate" because of the American reliance on "the customary products of Europe": cool- season vegetables. Jefferson's garden was of vegetable species native to hot climates, from South and Central America to Africa to the Middle East and the Mediterranean. Few places on earth combine tropical heat and humidity with temperate winters like those at Monticello. Jefferson capitalized on this by creating a south- facing terrace, a micro climate that exaggerates the summer warmth, tempers the winter cold, and captures an abundant wealth of crop-ripening sunshine. His collection of esculent talent, culled from virtually every Western culture known at the time, provided a display of warm- and cool- season vegetables unrivaled among American gardens of his day.

Jefferson's Monticello garden was an Ellis Island of introduced economic plants, some 330 varieties of ninety-nine species of vegetables and herbs. Jefferson wrote that "the greatest service which can be rendered any country is to add an useful plant to it's culture," and he envisioned his garden as a means for transforming society. He distributed seeds of his latest novelty vegetable to neighbors, political allies like George Washington and James Madison, and an international community of plantsmen, with the persistence of a religious reformer, a missionary of seeds. Although it is difficult to verify that Jefferson was the first to introduce any specific vegetable into American gardens, the recitation of crops grown at Monticello is a roster of rare, unusual, and pioneering species: asparagus bean, sea kale, tomatoes, rutabaga, okra, potato pumpkins, winter melons, tree onion, peanuts, "sprout kale," serpentine cucumbers, Brussels sprouts, orach, chickpeas, gherkins, cayenne pepper, rhubarb, black salsify, sesame, eggplant. Jefferson summed up his experimental proclivities in a letter to Samuel Vaughan Jr. in 1790: "I have always thought that if in the experiments to introduce or to communicate new plants, one species in an hundred is found useful and succeeds, the ninety nine found otherwise are more than paid for".

The vegetable garden in itself is the true American garden: practical, expansive, wrought from a world of edible immigrants. The Monticello garden is distinctly American in its scale and scope. More than two hundred thousand cubic feet of Piedmont red clay was moved with a mule and cart by a crew of enslaved men Jefferson hired from a Fredericksburg, Virginia, farmer. Over three years they created the garden terrace, which was retained by five thousand tons of rock laid as high as twelve feet and extending the length of the garden. Jefferson's four-hundred-

tree south orchard, surrounding two vineyards, extended below the wall and vegetable terrace, and the entire complex was enclosed by a ten-foot-high paling fence that ran for more than half a mile. Looking east from the garden plateau today, one is struck by the "ocean view" and, to the southwest, by the pleasing pattern of rows of vegetables against the background of Montalto, Jefferson's "high mountain." Atop the massive stone wall, Jefferson designed a classically inspired temple or pavilion, described appropriately as an "observatory" by some Monticello visitors. The pavilion is a deliberately designed perch upon which to gaze into the Virginia landscape, and the terraced garden was a stage from which to look down at what Jefferson referred to as "the workhouse of nature ... clouds, hail, snow, rain, thunder, all fabricated at our feet".