The New York Times "Phys Ed" columnist counsels casual and serious exercisers on the latest understandings about the mental and physical aspects of a fitness program, sharing recommendations for current "best practices for a range of goals."

NPR stories about The First 20 Minutes 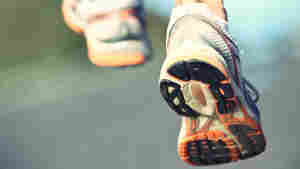 May 23, 2012 • Have you thought about switching to barefoot running? New York Times exercise columnist Gretchen Reynolds did — and promptly injured herself. She details what she did wrong — and how to keep your own feet healthy — in her new book, The First 20 Minutes. 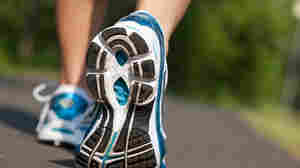 May 9, 2012 • New York Times "Phys Ed" columnist Gretchen Reynolds has some simple advice for staying healthy: Stand up. Move around. In her new book, The First 20 Minutes, she explains the hazards of a sedentary lifestyle, and details some of the surprisingly simple ways to stay fit.

There was a time when the question of how much exercise a person required was moot. The cows needed seeing to; the corn needed tending. As we all know, prior to World War II, most Americans lived outside cities and were active almost all the time, whether they wished to be or not. A recent study of activity levels among a group of modern Old Order Amish families, whose lifestyles are considered representative of a past America (apart from the boomers), found that Amish men spent more than 10 hours a week in vigorous activity, on top of almost 43 hours a week of moderate activity and 12 hours a week of walking. They averaged almost 18,500 steps per day, or about nine miles of walking every day of the week except Sunday. The Amish women were relatively slothful, covering only about 7.5 miles per day, on average.

By comparison, according to 2010 statistics, most American adults take about 5,000 steps a day, which pales in comparison not only with the Amish but also with activity levels in other countries. The happy-go-lucky Australians average about 9,700 steps a day, the highest total in the Western world. The Swiss, number two, yodel through 9,650 steps a day and, despite the ready availability of Lindt chocolate, have a national obesity rate of barely 8 percent. In America, that rate is 34 percent and rising.

But while those figures make it clear that most Americans don't move enough, they don't tell us how much each of us should be moving, because, frankly, no one really knows. "Science and common sense tell us that, without a doubt, it's unhealthy to sit and be sedentary all day," says William Haskell, Ph.D., an emeritus professor of exercise physiology at Stanford University and one of the country's experts in exercise dosing and longevity. "But precisely how much exercise is required for health, fitness, or athletic performance is difficult to determine."

Health, fitness, and athletic performance are, after all, distinct aims with distinct demands, and each of us must resolve, for ourselves, which we're trying to achieve. We also must decide how much we're willing to do, realistically, to reach those standards. Health may seem the most achievable goal, but in reality health is a slippery term, defined often by its absence. Having high blood pressure, rotten cholesterol numbers, too much blood sugar, a wide waist, or actual illnesses, from colds to cancer, is unhealthy. Not experiencing those same conditions is good health. Activity can, if chosen wisely, improve health.

Fitness is something else, although health and fitness are often automatically joined together. If you ask an exercise physiologist, fitness refers to cardiovascular or cardiorespiratory fitness (the two terms are almost but not quite synonymous — cardiorespiratory includes measures of lung function — but close enough). Physical fitness in this sense is a measure of how efficiently you transport oxygen to laboring muscles and maintain movement. A physically fit person has strong lungs, a robust heart, and sturdy muscles. She may or may not be clinically healthy. Some people blessed with high marks on fitness can have miserable cholesterol profiles or rotund waistlines. A surprisingly large portion of any given person's biological fitness is, in fact, innate. According to several large recent studies, 30 percent or more of a person's cardiovascular fitness may be genetic. You are born either more or less physically fit than the next person. But how you augment or diminish that inheritance is up to you.

Finally, there's athletic performance, an ambition unto itself, capable, in some instances, of mitigating the other two. Walking three miles a day on a regular basis will almost certainly improve most people's health and fitness. Running four marathons in a year might not. Unless it does. "There is considerable variability in people's responses to exercise, at any dose," Dr. Haskell says.

Which raises the most central and pressing question in this entire book: Yes, fine, all those studies are very interesting; but what about me?

How Low Can You Go?

Recently researchers in Scotland trawled through a vast database of survey data about the health and habits of men and women in that fair land, similar to the BRFSS survey here. In this case, the scientists were looking to see how much exercise was needed to keep the average Scotsman or — woman from feeling dour (or in technical terms, experiencing "psychological distress"). Scots are not famed for being blithe-hearted, and many of us might have expected that firm measures and lots of sweat would be required. But as it turned out, researchers found that a mere twenty minutes a week — a week! — of any physical activity, whether vigorous or easy, improved the respondents' dispositions. The activities in question ranged from organized sports to walking, gardening, and even housecleaning, the last not usually associated with bliss. The researchers found that, in general, more activity did confer more mental health benefits and that "participation in vigorous sports activities" tended to be the "most beneficial for mental health." But overall their conclusion was that being active for as little as twenty minutes a week was sufficient, if your specific goal happened to be a sanguine temper.

The question of just how little activity people can get away with has preoccupied exercise scientists in recent years, in part because so many of us have proven so resistant to any exercise. There was a time, in the 1970s and 1980s, when most exercise guidelines, including those from the American College of Sports Medicine (ACSM) and other groups, aimed at athleticism; they recommended that people engage in prolonged, uninterrupted, vigorous activity for an hour or more, multiple times a week. Basically, people should run, swim, or bicycle, the recommendations suggested, and they should do so hard, and the more the better.

Some people responded. That was the height of the 1970s running boom. Then in 1984, Jim Fixx, the author of The Complete Book of Running, died at age fifty-two of a "fulminant heart attack" while marathon training. Running didn't kill him. He'd been afflicted, an autopsy showed, with intractable heart disease, probably congenital. But some people gleefully and ghoulishly pointed to his death as a reason to remain couch-bound. Even more Americans, though, hadn't needed such an excuse. They had not been inspired to exercise in the first place, at least not hard, and resolutely continued not to.

By the 1990s, formal exercise recommendations, bowing to human nature, had softened, and experts were suggesting that less-vigorous exercise might be sufficient. In 1995, the ACSM and the CDC jointly announced that "Every U.S. adult should accumulate thirty minutes or more of moderate-intensity physical activity on most, preferably all, days of the week."

But there still was little science behind any exercise guidelines, including that one. So in the mid-2000s, the U.S. Department of Health and Human Services convened an advisory committee of scientists, including physiologists, cardiologists, epidemiologists, nutritionists, and others, and asked them to scrutinize decades of studies about the benefits— and risks— of exercise and to formulate new, evidence-based guidelines. The result was the massive 2008 Physical Activity Guidelines for Americans, which began on a cautionary note. The "amount of physical activity necessary to produce health benefits cannot yet be identified with a high degree of precision," the authors wrote.

But still the scientists had persevered, wading through studies involving animals and humans, looking at the impacts that various types and amounts of activity have on people's risks for heart disease, obesity, diabetes, cancer, depression, and premature death in general. In some studies cited in the final report, exercise conferred little if any disease-fighting benefits. In others, the benefits kicked in only if the exercise was quite strenuous. In still others, a gentle stroll a few times a week was enough to lessen the risk of many diseases and early death.

Despite the inconsistent results, the advisory committee ultimately reached a consensus about just how much — and how little — exercise most of us should be getting, at least for health purposes. The magic number, the report announced, was a minimum of 500 MET minutes of exercise a week.

Of course, unless you're an exercise scientist, you probably don't know what a MET minute is. A single MET, or Metabolic Equivalent of Task, is the amount of energy a person uses at rest. Two METs represent twice the energy burned at rest; four METs, four times the energy used at rest; and so on. Walking at three miles per hour is a 3.3-MET activity, while running at 6 miles per hour is a 10-MET activity. The committee concluded that a person needs to accumulate a weekly minimum of 500 MET minutes of exercise, which does not mean 500 minutes of exercise. Instead, 150 minutes a week (two and a half hours) of a moderate, three-to five-MET activity, such as walking, works out to be about 500 MET minutes. Half as much time (an hour and 15 minutes per week) spent on a 6-plus MET activity such as easy jogging seems, according to the committee, to have similar health effects.

What this means, in practical terms, is that according to the best available science, you should walk or otherwise work out lightly for 150 minutes a week in order to improve your health. This report and other, newer science show that you can split these 150 minutes into almost any chunks and still benefit. In a nifty study of aerospace engineers (virgin exercisers, one and all), the men were assigned to briskly walk or gently jog for 30 minutes a day in either a single, uninterrupted half-hour bout or in three 10-minute sessions spread throughout the day (10 minutes in the morning, 10 minutes at lunchtime, and 10 minutes in the evening). At the end of eight weeks, both groups of engineers had improved their health and fitness profiles, without major differences between the groups. All had wound up with lower heart rates, better endurance on a treadmill test, and a few less pounds.

So, too, when separate groups of lab rats recently were allowed either leisurely to rodent-paddle in a laboratory water feature for three hours or were required to increase the tempo until they were swimming quite vigorously for 45 minutes, the animals afterward uniformly displayed significant improvements in their bodies' ability to regulate blood sugar, a key measure of health.

It hadn't mattered how they'd accumulated the exercise, only that they had.