Title
We Can All Do Better
Author
Bill Bradley

NPR stories about We Can All Do Better 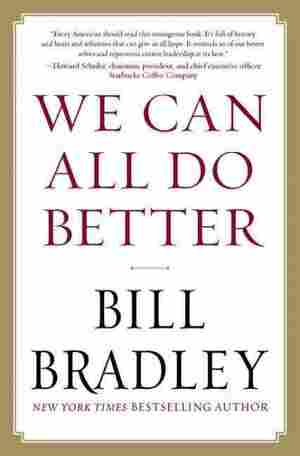 May 10, 2012 • The former New Jersey senator, basketball player and presidential candidate sees an America enduring a "slow-motion crisis." But he also sees unlimited potential to improve the U.S. In We Can All Do Better, Bradley argues that political change can come about remarkably fast, but only if people get involved.

Excerpt: We Can All Do Better

For eighteen years, I was a U.S. senator. Then for three years, I ran for president. For the past twelve years, the equivalent of two Senate terms, I've worked in finance, including venture capital, investment banking, and money management. People ask me what I miss about being in politics. The answer is twofold: I miss concerning myself with public policy seven days a week and interacting with constituents. For me, American democracy is, as Woodrow Wilson put it, a "sacred mystery."

I was always moved by the special relationship between a legislator and his constituents. In my Senate days, I would travel around New Jersey, my adopted state, trying to capture in my mind and heart the essence of the New Jerseyness I sought to represent. I believed I had been elected to use my judgment, not to be a weather-vane swiveling in whatever direction the popular wind pointed. But that still meant I had an obligation to listen to my constituents before I voted.

Next to a large canvas sign reading "Meet Senator Bradley," I would stand in the concourse of the Port Authority bus terminal, where ten thousand New Jersey commuters rushed past in an hour, my hand outstretched, my aides ready with pen and paper in case someone's question required more information than I could convey in a fleeting moment. I would walk the beaches of the Jersey Shore, each summer covering the hundred and twenty-seven miles from Cape May to Sandy Hook, in what I called a walking town meeting; moving along the high-water line, I would answer questions, shake hands, catch Frisbees, pose for photos, and generally enjoy myself. At local Democratic Party events — dances, dinners, cocktail parties — I would heed the advice an old pro once gave me, "Billy, you got to kiss the women," only to come home at night drenched in the aromas of a hundred different perfumes.

New Jerseyans, like most people, cared about the big issues: jobs, health care, education, the environment, pensions, along with issues of foreign policy that bore on our national security. They were interested, too, in purely local issues: airport noise, commuter trains, road construction, and beach replenishment. I would stand before three hundred people in a town hall, taking their questions and gauging their moods — and I would ask myself, "What made these three hundred people come out on this freezing winter (or rainy spring) night to ask me questions?" Sometimes the answer was simple curiosity, but usually they wanted to find out whether they agreed with my views on the economy, foreign policy, or a hundred other issues. Sometimes they just wanted to have their say. I found the job of being their senator a big, exhausting, and wonderful responsibility.

I was frequently rejuvenated by these interactions with constituents. Occasionally I was their piñata, but most often they shared their concerns and hopes with me. They told me how they were coping and what they thought government should do and not do. They asked me to help them with a mistake made by the federal bureaucracy — a lost Social Security check, an immigration problem. Their very presence at a town meeting or issue forum, their visits to my offices in New Jersey or Washington, DC, was testimony to their faith in our system of governance. They saw that the system was theirs.

The mystery for me was the connection I felt to them. I had always been curious about other people and enriched by their stories. But there had to be more to it than that. No one in my family had ever held elective office. My father, the local banker, was treasurer of the school board in our hometown of Crystal City, Missouri, for over twenty years, and my mother was a fourth-grade teacher and later a volunteer in church and civic groups. Both parents drilled into me, by word and example, the value of altruism, of giving a part of yourself to another human being. In a family like mine, idealism came naturally, but politics was another matter. My father wanted me to be a gentleman, my mother wanted me to be a success, but neither wanted me to be a politician.

But there was something moving and powerful to me even then about a group of citizens interacting in the knowledge that their collective opinion could have an impact. Democracy, I came to realize, worked only if people assumed their responsibility as citizens. If they didn't act, the monied interests controlled the process. If they took the initiative, our history showed that they could change the country's direction.

Whenever I go back to that small town that sits on the west bank of the Mississippi, I go down to the river and stand for a while, watching it flow. It scours half a continent on its way to the Gulf of Mexico, and I imagine it all starting with one drop of water that with other drops forms a trickle that becomes a branch that flows into a creek that feeds into a river that flows into another, larger river, and another, and another, until there it is before me — the mighty Mississippi. In those moments, the river is, for me, a metaphor for our democracy. Both start with a single, small, seemingly insignificant thing — one drop of water and one citizen — that comes together with others and still others until you have a powerful current that sweeps away anything in its path. That river best expresses the mystery of democracy for me. "Out of many — one," it says on the dollar bill. That's true of a river and a democracy.

I look at our world as it is today and wonder how our American story will evolve. There are so many uncertainties, so much division, so much pain, yet I also see unlimited potential. The question is, Can we make the decisions now that will secure us a better tomorrow?