Traces the story of the 1901 White House dinner shared by the slave-turned-African-American-political-leader and the 26th President, documenting the ensuing scandal and the ways in which the event reflected period politics and race relations.

NPR stories about Guest of Honor 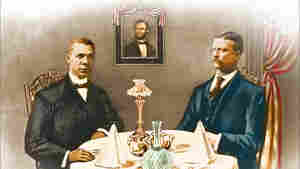 May 14, 2012 • In 1901, President Theodore Roosevelt invited Booker T. Washington to dine with his family at the White House. News of the dinner became the subject of inflammatory articles and cartoons and shifted the national conversation around race at the time. Deborah Davis tells the story in Guest of Honor.

The Roosevelts liked their "three squares" and they assumed their guests felt the same way. Americans were fascinated by the food that was served at the White House. No matter how many times TR protested that he, his wife, and their children ate like any average American family, people imagined them dining on exotic fare. The perennial interest in presidential cuisine sparked numerous cookbooks, including one titled The White House Cookbook by Mrs. F. L. Gillette and Hugo Ziemann, steward of the White House, first published in 1887.

The book offered a week's sampling of menus for each month of the year. For tonight, a Wednesday in October, for example, Gillette and Ziemann recommended a savory, autumnal meal that included:

Recipes for the proposed dishes were included in the book.

Annie O'Rourke, the Roosevelts' cook, may or may not have followed the volume's culinary advice when she began her dinner preparations earlier in the day. She was more likely to select choices from a list of reliable family favorites since guests always seemed to like them. One such staple was the classic Southern combination of hominy with gravy, a dish so beloved by TR that it sometimes appeared on the table at breakfast, lunch, and dinner. He also pioneered the idea of serving vegetables harvested from the fields and gardens of Sagamore Hill, including sweet potatoes, fiddlehead ferns, dandelion greens, and wild lettuce.

No meal was complete without a basket of Mrs. O'Rourke's warm and buttery homemade biscuits with currants, affectionately called "Fat Rascals," or a plate of her sugar wafers, the recipe for which was handwritten on the inside jacket of one of Edith's personal cookbooks. The ever-critical Henry Adams was immune to the charms of the Irish cook's specialties, saying that he found the food in the Roosevelt White House to be "indifferent and very badly served." But he was a bit of a snob.

Unlike the Polks or the Hayeses, the Roosevelts served alcohol at their table — usually white wine and sherry. They didn't mind if other people indulged in spirits, although they seemed indifferent to them. Two decades of interminably long political and society dinners had taught TR a trick or two. Whenever possible, his valet filled his glass to the brim with crushed ice, and then topped it off with the smallest amount of wine. The President appeared to be keeping up with everyone else, but he was imbibing very little alcohol. Ironically, the large-glass-filled-with-ice ruse often made some observers think that Roosevelt was a tippler who drank too much. Henry Adams dismissed that rumor with yet another barb. "Theodore is never sober," he agreed, "only he is drunk with himself and not with rum."

Coffee was TR's real vice. He consumed vast amounts of it, literally gallons, all day long. His son Ted described his father's cup as being so enormous that it was "more in the nature of a bathtub." And there wasn't only coffee in it — TR's sweet tooth was so powerful that he required five, six, and even seven lumps of sugar at a time, creating a constant buzz that made him even more energetic and excitable.

The President's infatuation with coffee spawned a legend and a famous advertising campaign. According to Roosevelt lore, TR was dining at the Maxwell House in Nashville, Tennessee, when he was served a freshly brewed cup of the house blend. It was so hot and flavorful that he drank it down in a big gulp and said with a sigh of regret, "My, that was good to the last drop." Maxwell House took note of his words and, in 1917, when selling its coffee to the public, made his compliment the company's official slogan. TR was not mentioned by name until the 1930s, after he was dead and unable to comment upon whether he wanted to endorse the product.

Booker T. was doubtless a bit nervous at the outset of the dinner, but soon relaxed and felt perfectly at ease at the President's table. Edith was noted for her ability to make each guest feel as if he were the only person she wanted to see, and she conversed with princes, cowboys, and shopgirls with equal aplomb. Nothing could rattle her composure after three years of entertaining the rambunctious Rough Riders who regularly turned up for "grub." (One particularly "rough" rider was arrested for firing his gun at a woman and tried to reassure the horrified Roosevelts by explaining, "I wasn't shooting at the lady, I was shooting at my wife.") At least Booker T. was a man Edith admired.

TR was full of chatter and goodwill. The first thing that every guest noticed about the President was that he never stopped talking, and he did so with such emphasis that his words burst forth like "projectiles." Henry Adams complained that no one could get a word in edgewise. "Theodore absorbed the conversation," he wrote after one evening together, "and if he tried me ten years ago, he crushes me now. To say that I enjoyed it would be ... a gratuitous piece of deceit." Another White House visitor said that when Roosevelt was at the table, "hardly an observation was made by anyone else ... and in fact, it would only have been possible by the exercise of a sort of brutal force." Sometimes when TR was monopolizing the conversation, Edith sent him a not-so-subtle signal by quietly saying "Theodore! Theodore!" The President would sheepishly answer, "Why, Edie, I was only — " in mock defense, but he appreciated the fact that she helped to keep his ego in check.

As for Booker T., whether the topic was Southern politics, the "Negro problem," or the best way to raise chickens, he could hold his own at any gathering. He was smart and good- humored, but unlike his host, he took his time when it came to conversation. He chose his words carefully because he didn't always have the luxury of speaking his mind. But Booker T.'s folksy yet dignified style served him well at the tables of millionaires, statesmen, royals, and now, the President.

Philip Stewart also contributed to the lively atmosphere that night. He had plenty to say about Colorado (TR wanted to discuss the matter of federal appointments in that part of the country, as well as in the South). He and TR had gone hunting there in January and recounted tales for the children, who loved hearing about their father's adventures. Stewart was armed with his new Kodak camera on that trip and photographed the various animals they encountered, from a friendly jackrabbit to a vicious mountain lion. The lion had jumped down from its treetop hiding place to attack the hunting party's dogs. TR came to the rescue by boldly leaping into the fray of fighting animals and plunging a hunting knife into the big cat's heart.

Booker T. watched the wide-eyed children with interest. His dining room back home at The Oaks was an exceedingly proper place, where Portia and her brothers were seen and not heard. The young Roosevelts, on the other hand, brought pets to the table (snakes, mice, and other specimens, as their father had done before them), expressed opinions and reactions, and behaved, well, like children. Not bad children, but children nonetheless. It was getting late. Archie and Quentin were overexcited by their long and eventful first day in the White House, and their siblings had school the next day, so they were all sent to bed.