A Natural and Unnatural History

Draws from the fields of anthropology, biology, and medicine to describe the life cycle of the human female breast, from puberty to pregnancy to menopause, and discusses the organ's modern susceptibility to toxins and disease. 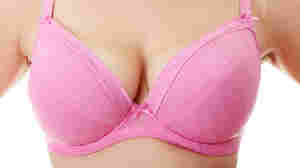 Breasts are getting bigger and arriving earlier. They're also attracting chemicals and environmental toxins, which are getting passed along in breast milk. Photographer: B-D-S/iStockphoto.com hide caption

May 16, 2012 • In her new book, Breasts: A Natural and Unnatural History, Florence Williams offers her take on why breasts are getting bigger and developing earlier, why tumors seem to gravitate toward the breast, and how toxins from the environment may be affecting hormones and breast development.

In our culture at least, big breasts get a lot of attention. So I'm told. I display, or rather, don't display, the traditional average American size, a B cup. Women I know tell me that having large breasts is like walking around with a neon sign hanging around their necks. Men, women, small children, everyone stares. The eyes linger. Some men pant. It's not surprising that some anthropologists have called breasts "a signal." Breasts, they say, must be telling us something about how fit and mature and healthy and maternal their owner is. Why else have them?

All mammals have mammary glands, but no other mammal has "breasts" the way we do, with our pleasant orbs sprouting out of puberty and sticking around regardless of our reproductive status. Our breasts are more than just mammary glands; they include a meaty constellation of fat and connective tissue called stroma. To be functional for nursing an infant, a mammary gland need fill only half an eggshell. Big breasts are not required. Along with bipedalism, speech, and furless skin, breasts in their soft stroma-filled glory are one of humanity's defining characteristics. But unlike bipedalism and furlessness, breasts are found in only one sex (at least most of the time). And those kinds of traits, as Darwin pointed out, often evolved as sexual signals to potential mates.

But signals of what, exactly? And does this explain how and why humans won the boob lottery? Many scientists seem to think so, and they have devoted large chunks of their careers to answering these questions. One thing is clear: it's rather fun trying to find out. It's not especially hard to design studies showing that men like breasts. What's much trickier is proving that it actually means anything in evolutionary terms.

I was hoping the answers might lie with the creative experiments of Alan and Barnaby Dixson, a father-son team of institutionally supported breast watchers. Both based in Wellington, New Zealand, together they've published papers on male preferences for size, shape, and areola color and on female physique and sexual attractiveness in places such as Samoa, Papua New Guinea, Cameroon, and China. Alan, a distinguished primatologist and former science director of the San Diego Zoo, brings a specialty in primate sexuality to their shared project, while Barnaby, a newly minted Ph.D. in cultural anthropology, has a knack for computer graphics and a fresh zeal for fieldwork.

I first met Barnaby on a blustery fall day in Wellington. At twenty-six, his curly auburn hair falling around the collar of a fisherman's sweater, he was very earnest. He walked around with a distracted air and wrinkled brow, and often misplaced things, such as parking receipts. It's not easy being a sex-signaling expert. "Sometimes people think I'm using the government's money to look at breasts. They misunderstand what we do," said Barnaby, who's tall and gangly and speaks with a crisp British accent. As Barnaby pointed out, in places like Samoa, which is now very missionized, it can be a delicate matter asking men to describe which types of breasts they prefer. He said some men think he's "a perv" and get very angry. He avoids men who have been drinking. And in the academic world, grant money can be hard to come by when there are things like breast cancer research to fund. "I probably should have been a doctor," he said. "But I'm quite squeamish really."

Barnaby's latest digital experiment employed an EyeLink 1000 eye-tracking machine and a suite of specialized software. The sixty-thousand-dollar piece of equipment lives in a small, nondescript room labeled "Perception/Attention Lab" in the psychology department at Victoria University. It looked like something you'd find in an optometrist's exam room. You place your chin in the chin cradle and your forehead against the forehead rest. Then you look through little lenses. Instead of seeing an alphabet pyramid, though, your eyes meet images of naked women flashing on a computer screen. If all eye exams worked like this, men would surely get their vision screened in a timely fashion.

On the day I visited the lab, an ecology graduate student named Roan was game to volunteer. Wearing jeans and a baggy T-shirt, he patiently looked through the eye-tracker as Barnaby calibrated the machine. Then Barnaby explained the test. Roan would be looking at six images, all of the same comely model, but digitally "morphed" to look different. Roan would have five seconds to view each image, and then he'd be asked to rank it on a scale of one to six, from least attractive to most, using a keyboard. The images would have smaller and larger breasts and various waist-to-hip ratios. These two metrics, the breasts and the so-called WHR (essentially a measure of curviness), are the lingua franca of "attractiveness studies," which is, believe it or not, a recognized subspecialty of anthropology, sociobiology, and neuropsychology. The theory is that how males and females size each other up can tell us something about how we evolved and who we are.

The eye-tracker doesn't lie. It would show exactly where on the body Roan was looking while making up his mind. As Barnaby had explained to me earlier, the machine would measure the travel of Roan's pupils within one-hundredth of a degree, and would record how long his gaze lingered on each body part. "The beauty of the eye-tracking machine is that it allows you to get some measure of behavioral response. You can measure, literally, the behavior of the eye during attractiveness judgment," Barnaby had said.

Roan began staring and ranking. The whole thing took a couple of minutes. He looked a little flushed when it was over.

He stuck around to see how he did. Barnaby called up some neat graphics and computations. A series of green rings overlay the model; they represented each time Roan's eyes lingered for a moment. Some of the rings were on her face, a few on her hips, a whole bunch on her breasts. Barnaby explained them as he reviewed the data. "He starts at the breasts, then looks at the face, then breasts, then pubic region, midriff, face, breasts, face, breasts. Each time the eye rests longer on the breasts." Roan spent more time gazing at the breasts than elsewhere during each "fixation." He rated the slimmer images with large breasts as most attractive.

In other words, Roan behaved just as most men do, and just as Jayne Mansfield knew he would. She could have saved Victoria University a chunk of change.

Barnaby's eye-tracker results may be obvious, but to a scientist, data are key. Barnaby was preparing to publish his study in a journal called Human Nature. He believed the work backs up a relatively well-accepted hypothesis that breasts evolved as signals to provide key information to potential mates. That's why men's eyes zoom in on breasts within, oh, about two hundred milliseconds of viewing an image. That's milliseconds. "The overall theory is that youth and fertility are important traits when men and women in ancestral times were selecting a partner," said Barnaby. "So it makes sense they'll select for traits that signal mate value, youth, health, fertility." He believes men find breasts useful. Because men liked these informative, novel, gently pendulous orbs—which originally sprang up in the accidental way all new traits do—they selected mates accordingly. The breasty women were the ones who mated most, or mated with the best males, and so the trait was passed down for all to behold. In the world according to Barnaby, that's pretty much the end of the story.

I wondered whether Roan subconsciously sensed that cache of health and youth information in a few seconds of ogling.

"Good question." Roan is a South African who spends his academic time studying rhinos. "Yeah, but not majorly so. It's not like I'm obsessed, like some guys I've met who tend to go on about it. But yeah, I definitely don't have any problem with them."

I couldn't help feeling peeved by the real-world relevance of the eye-tracking study. A man looks at a woman's hips and breasts for five seconds and decides whether or not to mate with her? Was that how it worked in our deep evolutionary past? Was it how it worked now? And even if it were, did it really explain why we have breasts in the first place?

"When you're meeting a woman, you're hopefully looking at more than just her breasts," I said to Barnaby and Roan.

"That's an important point," interjected Barnaby. "You're not just going to stare at her breasts."

"Some people do," said Roan.

Barnaby felt a need to rescue the conversation. "This is an artificial experiment. It measures what you might call a first-pass filter, just things that are immediately apparent. Then later, when you're meeting and talking, so many other things factor in, like personality, religious background, socioeconomic status."