Pawan Dhingra explores Indian-Americans' success in the motel industry. According to Dhingra, Indian-Americans own about half of all American motels and many of those owners hail from the same region of India.

NPR stories about Life Behind the Lobby 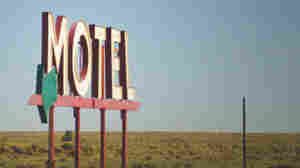 Excerpt: Life Behind The Lobby

You are part of this economy, integral to the health of the U.S., accounting for $40 billion in commerce each year. . . . It won't be long before you are known as people and families who are deeply, passionately, knowledgeably, involved in making our beloved United States of America what it should be.

When former Vice President Al Gore spoke these words at a 2002 convention of motel owners, he was not the first — nor would he be the last — high-profile politician to do so. President Bill Clinton, Senator Bob Dole, Senator Christopher Dodd, Congressman Newt Gingrich, and two-time presidential candidate and publisher Steve Forbes, among other notables, also have addressed this group. Such a lineup is especially note-worthy because the attendees of this convention are not the typical collection of U.S. business owners. Practically all of the audience members were Asian Indian American. These motel owners have created what likely is the largest ethnic enterprise in U.S. history. They claim about half percent of all the nation's motels and hotels, with a concentration in lower- and middle-budget motels. Indeed, these leading Indian American motel owners have accrued enough wealth and resources to command attention and bring powerful, wealthy, white men in as speakers.

Indian American motel owners appear as the American dream incarnate — self-employed, self-sufficient, boot-strapping immigrants who have become successful without government intervention. Regardless of their political ideology, these keynote speakers invoke the "model minority" stereotype to describe Indian American motel owners, praising them as a group that has overcome obstacles on the road to great achievements and implying that racial or cultural inequality is no longer an issue. In his address to the 2004 AAHOA convention attendees, former speaker of the house Newt Gingrich said: "I am proud to be here with you. You are what the American dream is all about. . . . You will make America a better country for us and our kids and grandkids."

Nor is it just politicians who have embraced this narrative. Popular media have made similar points. For instance, a 2004 New York Times story complimented the growth of motels owned by first- and second-generation (that is, immigrant parents and their U.S.-born children) Patels by profiling a typical owner, saying:

Morning and night, Mr. Patel, an immigrant from the Indian state of Gujarat, manned the front desk and did repairs on a 60-room Econo Lodge in Bordentown, New Jersey, while his wife, Indu, and two children hauled suitcases, made up beds, and vacuumed rooms. And the work paid off. At age 57, Mr. Patel owns not only the Econo Lodge but, with relatives, four other hotels. . . . At hotel schools like those at Cornell University, New York University, and San Diego State University, as well as more general business schools, the children are studying how to manage chains of hotels, work in corporate offices of name-brand franchisors, and acquire more upscale properties like Marriott and Hilton. Call them the Cornell hotel Patels.

Similarly, a USA Today article published in 2007 conveys this motel phenomenon through the lens of an everyday Indian American, Dinu Patel, and his upscale Four Points motel in Connecticut:

Thirty-five years after the arrival in the United States of the first Indian motel keepers — almost all with roots in the western India state of Gujarat and most with the surname Patel — up-by-the-bootstraps tales like that of Dinu Patel have become common. . . . The influence of Mahatma Gandhi, a Gujarati who preached self-reliance and simplicity, may also have an influence in their business culture.

Although these newspaper articles note challenges owners can face, the narrative of Indian Americans having pulled themselves up by their ethnic bootstraps has become accepted doctrine.

Other depictions of the challenges faced by Indian American motel owners, however, are far less positive. The celebrated film Mississippi Masala, by director Mira Nair, depicts an Indian American family from Uganda that works in a motel in a small town in the South, a region with a large representation of Indian American motel owners (Bal 2006). They encounter racist comments from customers who decry seeing yet another motel owned by Indian immigrants. Worried about bringing in money, they occasionally rent out rooms by the hour for likely illicit affairs. Nor are their personal lives content. They are caught up in the class hierarchies of their local Indian community and harbor longings for the country they had left behind. Indeed, films and television programs routinely depict motels, no matter the ethnicity of the owners, as isolated, run-down, and possible havens for crime.

Although both portrayals of motel owners are exaggerated, which more accurately reflects Indian Americans' experiences and small business owners more generally? And how can they both have relevance at the same time for the same owners? Using observations and in-depth interviews, I concentrate primarily on Indian Americans who own lower- budget establishments — both independent and franchise — and secondarily on those with middle-budget franchises. These two groups make up the bulk of Indian American owners and have received both the praise and critique indicated. Lower-budget (broadly defined) motel brands that Indian Americans commonly own include Comfort Inn, Days Inn, EconoLodge, Knights Inn, Sleep Inn, Super 8, and Travelodge, to name a few. Middle-budget motels include Best Western, Country Inn and Suites, Hampton Inn, and Holiday Inn (and Express). Indian Americans have slowly been entering the higher-end motel market and even the full-service hotel market (for example, boutique hotels, Courtyard by Marriott, and Hilton). To appreciate better the contradiction in appraisals of motel owners, I elaborate on both.