The star of such blockbuster 1980s films as Police Academy and Three Men and a Baby describes his early encounters with celebrities and casting agents on the Paramount lot before rising to fame and learning how to stay grounded through the support of his family.

NPR stories about The Guttenberg Bible 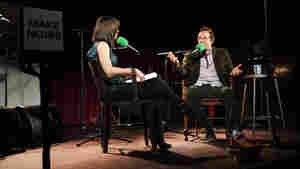 "About the third or fourth time [I sneaked into a famous casting director's office], I jumped up on his desk and started dancing. So he said, 'Look. Just sit down. I'll give you five minutes.' And it was like having five minutes with God." Josh Rogosin/NPR hide caption

Steve Guttenberg: How To Make It In Hollywood

February 22, 2013 • Hear the actor's unlikely Hollywood success story, which began with him talking his way onto the Paramount lot and resulted in his roles in Police Academy, Diner and Three Men and a Baby. Plus, we challenged him to determine which of three celebrities is the father of some notable babies.

Steve Guttenberg: How To Make It In Hollywood 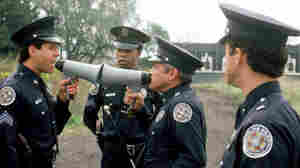 June 9, 2012 • The Police Academy star began his acting career at the age of 17 by faking it. He snuck into the Paramount Studios lot, set up an office and started landing auditions. He writes about his unorthodox Hollywood start in his new memoir, The Guttenberg Bible. 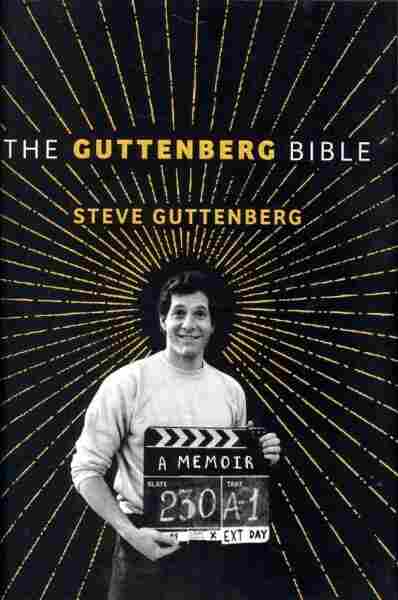 "You are the last guy I would pick to be a movie star."

That's what an agent said to me when I was sixteen.

He was a friend of my godfather, Michael Bell. You may not have heard of Michael as an actor, but you have definitely heard his voice. He is one of the preeminent voice-over specialists. In the '70s, he would come from Hollywood to visit my family's house in Long Island, New York, bringing with him rented sports cars, beautiful girlfriends, and plenty of money in his pocket. When people would ask me what I wanted to be, I would look at Michael and his life and say, "Whatever he does!" He was a star to me. This guy was an inspiration to a kid from Massapequa.

In 1975, Michael made an appointment for me to visit his agent's New York office. I flew through Penn Station and ran twenty blocks to the skyscraper where I assumed my dreams would come true. I met two female agents and one older vice president of the agency. They were complimentary about my head shots, and I explained a bit about the theater experience I had in Long Island. Then, as if my dog had died, the VP asked the ladies to leave so he could speak to me alone. This started to give me the creeps. My first creep-out in show business, with more coming.

"I'm going to give you a gift," he said, "something that I would give my own son."

This is going to be good! I thought to myself.

Instead he said, "Get out of the business, get out of this office, and become something else. Forget being an actor. You don't have the look, you don't have the talent, and your name is ridiculous. I'm telling you this for your own good. This is a tough, competitive business that you have no place in. Take my advice, walk out these doors, no, run out these doors to Penn Station, get on the train back to Massapequa. You are the last guy I would ever pick to be a movie star."

I swear I didn't hear a thing he said.

On June 24, 1976, I graduated Plainedge High School, and already knew what I wanted to do. I had a girlfriend, of whom I was very fond, and could have stayed in the New York area, gone to college, and had a calm, normal life. But I had other things in mind.

Two days later I was on a plane to Los Angeles. I had three hundred dollars in my pocket, salami from my mother, and my father's briefcase. Michael met me at the gate. We walked outside and Los Angeles hit me. The sunshine, the air, the energy.

We got to Michael's car, a green BMW, and drove to his house. All the way we couldn't shut up. It was all new to me, and I asked about each and every thing I saw. Michael is a chatterbox, too, and couldn't help but give me the 411.

"That's where James Dean auditioned for Rebel, that's Beverly Hills, that way is Malibu where the stars all have beach houses, and over there, along those mountains, is Mulholland Drive, where I live. Oh, and so does Jack Nicholson, Marlon Brando, and Warren Beatty."

We took the 405 freeway and got off on the Mulholland exit. After passing mansion after mansion overlooking the cliffs, we got to his place. He pointed across the street to Ernest Borgnine's house.

"Yep, but we in the acting business like to refer to him as the Academy Award winner for Best Actor for Marty."

We drove down Michael's driveway, and there it was. A mansion overlooking the San Fernando Valley. We walked along a path that seemed right out of a movie. For that matter, so did everything I saw from then on.

I had two weeks to try and become a working actor. After that, I would be going to Albany University to study and enter the real world. But who knows, two weeks was a long time and anything could happen.

At dinner that night Michael suggested I take his extra car, a 1974 Pacer, and drive around Hollywood, look at the studios, and read Variety. "Just don't do anything dangerous or your parents will kill me."

The next morning I was up early to start my career. I bought Variety, which was exciting in itself. I drove past Warner Bros. in Burbank, then NBC. I took off to see Universal, then Twentieth Century-Fox, MGM in Culver City, and then the grande dame of them all, Paramount. That famous Bronson Gate made immortal in Sunset Boulevard. I could see in my mind William Holden and Gloria Swanson standing there, beckoning me in. And I noticed the guard smiling and waving people through. The card-punching clock for employees, and beyond the gates the famous Nickodell Restaurant where it looked as if starlet after starlet was coming in and out. My stomach even now has knots in it, remembering my excitement. The feeling of freedom, of possibilities! I drove home and dreamed of driving onto that lot.

That night I told Michael what I did, and he said, "You have thirteen days left." He would bring me to his agents, Cunningham in Los Angeles, and introduce me. "You never know what can happen."

The next day we went to the agency and he introduced me to Vic Sutton, Rita Vennari, and Marcia Hurwitz, three agents there that agreed to "send me out" if something came up. Send me out! That was as good as being told I won the lottery. After that, I called them every day, twice a day. I was polite, but persistent. I knew I had a short amount of time to make a dent in Hollywood.