Arriving in Paris on the eve of the Munich Appeasement in 1938, Hollywood star Frederic Stahl is unwittingly entangled in the region's shifting political currents when he discovers that his latest film is linked to the destinies of fascists, German Nazis and Hollywood publicists.

NPR stories about Mission To Paris

June 12, 2012 • In his latest novel, Mission to Paris, Furst returns to a Europe on the brink of war. Hollywood star Fredric Stahl gets mixed up with a host of unsavory characters while making a movie in France in 1938. It's historical fiction at its best. 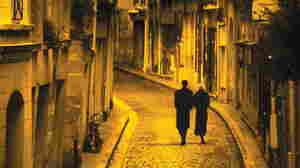 June 9, 2012 • Alan Furst's new thriller, Mission to Paris, follows a German-American film star to Europe on the brink of war. Fredric Stahl thinks he's going to make a movie in France, but he winds up caught between German and American forces who both hope to use his stardom for their own ends.

In Paris, the evenings of September are sometimes warm, excessively gentle, and, in the magic particular to that city, irresistibly seductive. The autumn of the year 1938 began in just such weather and on the terraces of the best cafes, in the famous restaurants, at the dinner parties one wished to attend, the conversation was, of necessity, lively and smart: fashion, cinema, love affairs, politics, and, yes, the possibility of war — that too had its moment. Almost anything, really, except money. Or, rather, German money. A curious silence, for hundreds of millions of francs — tens of millions of dollars — had been paid to some of the most distinguished citizens of France since Hitler's ascent to power in 1933. But maybe not so curious, because those who had taken the money were aware of a certain shadow in these transactions and, in that shadow, the people who require darkness for the kind of work they do.

The distinguished citizens, had they been willing to talk about it, would have admitted that the Germans, the political operatives who offered the bounty, were surprisingly adept. They knew how to soften a conscience, presented bribery as little more than a form of sophisticated commerce, of the sort that evolves in salons and offices and the private rooms of banks — a gentleman's treason. And the operatives could depend on one hard-edged principle: that those who style themselves as men of the world know there is an iron fist in every velvet glove, understand what might await them in the shadows and so, having decided to play the game, they will obey its rules.

Still, human nature being what it is, there will forever be somebody, won't there, who will not.

One such, on the fourteenth of September, was a rising political star called Prideaux. Had he been in Paris that evening, he would have been having drinks at Fouquet with a Spanish marquis, a diplomat, after which he could have chosen between two good dinner parties: one in the quarter clustered around the Palais Bourbon, the other in a lovely old mansion up in Passy. It was destiny, Prideaux believed, that he spend his evenings in such exalted places. And, he thought, if fucking destiny had a shred of mercy left in its cold heart he would just now be hailing a taxi. Fucking destiny, however, had other things in mind for the future and didn't care a bit what became of Prideaux.

Who felt, in his heart, terribly wronged. This shouldn't be happening to him, not to him, the famously clever Louis Prideaux, chef de cabinet — technically chief of staff but far more powerful than that — to an important senator in Paris. Well, it had happened. As tout Paris left for the August migration to the countryside, Prideaux had been forced to admit that his elegant world was doomed to collapse (expensive mistress, borrowed money, vengeful wife) and so he'd fled, desperate for a new life, finding himself on the night of the fourteenth in Varna, the Black Sea port of Bulgaria. Bulgaria! Prideaux fell back on his lumpy bed at a waterfront hotel, crushed by loss: the row of beautiful suits in his armoire, the apartment windows that looked out at the Seine, the slim, white hands of his aristocratic — by birth, not behavior — mistress. All gone, all gone. For a moment he actually contemplated weeping but then his fingers, dangling over the side of the bed, touched the supple leather of his valise. For Prideaux, the life preserver in a stormy sea: a million francs. A soothing, restorative, million, francs.

This money, German money, had been meant for the senator, so that he might influence the recommendation of a defense committee, which had for some time been considering a large outlay for construction on the northern extension of the Maginot Line. Up into Belgium, the Ardennes forest, where the Germans had attacked in 1914. A decision of such magnitude, he would tell the committee, should not be made precipitously, it needed more time, it should be studied, pros and cons worked through by technicians who understood the whole complicated business. Later, the committee would decide. Was it not wise to delay a little? That's what the people of France demanded of them: not rash expenditure, wisdom.

All that August, Prideaux had temporized: what to do? The suitcase of money for the senator had reached Prideaux by way of a prominent hostess, a German baroness named von Reschke, who'd settled in Paris a few years earlier and, using wealth and connection, had become the ruling despot of one of the loftiest salons in the city. The baroness spent the summer at her chateau near Versailles and there, in the drawing room, had handed Prideaux an envelope. Inside, a claim ticket for the baggage office at the Gare de Lyon railway station. "This is for you-know-who," she'd said, ever the coquette, flirting with the handsome Prideaux. He'd collected the suitcase and hidden it under a couch, where it gave off a magnetic energy — he could feel its presence. Its potential.

The senator was in Cap Ferrat, wouldn't return until the third of September, and Prideaux sweated through hot August nights of temptation. Sometimes he thought he might resist, but the forces of catastrophe were waiting and they wouldn't wait long: his wife's ferocious lawyer, the shady individuals who'd loaned him money when the banks no longer would, and his cruel mistress, whose passion was kindled by expensive wines with expensive dinners and expensive jewelry to wear at the table. When unappeased she was cold, no bed. And while what happened in that bed was the best thing that had ever happened to Prideaux, it would soon be only a memory.

He had to escape before it all came crashing down on him. Take the money, Prideaux's devil whispered. The Germans have more where that came from. Go to, say, Istanbul, where a perfect new identity could be purchased. Then, on to exotic climes — Alexandria? Johannesburg? Quebec? A visit to a travel agency revealed that a Greek freighter, the Olympios, took on a few passengers at the Bulgarian port of Varna, easily reached by train from Paris. Stay? Or go? Prideaux couldn't decide but then, after an exceptionally uncomfortable telephone call from one of his creditors, he took the money and ran. Before anyone came looking for him.