The lead singer for the band The Selecter looks back on 30 years in the male-dominated music industry, and recounts more personal stories — about being mixed-race, being adopted by a white couple, and tracing her biological roots.

NPR stories about Black by Design 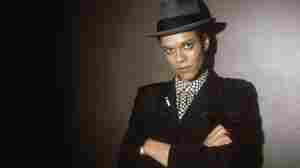 How 'The Queen Of British Ska' Wrestled With Race

June 9, 2012 • One of few women in a musical movement dominated by men, Pauline Black helped lead the 1970s U.K. ska revival with her band The Selecter. She discusses her complicated family history in a new memoir, Black by Design.

How 'The Queen Of British Ska' Wrestled With Race

My earliest memory is of vomiting the breakfast contents of my stomach onto a pile of starched white sheets that my mother had just finished ironing. I succeeded in Jackson Pollocking all of them. She was not amused, but then again it was her own fault: she shouldn't have told me that I had been adopted.

It was the late summer of 1958 in Romford, a newly expanding market town in the county of Essex, famous for the stink of its Star brewery, "a night down the dogs" at the local greyhound racing stadium and as the one-time residence of the infamous Colonel Blood, the only man to have stolen the Crown Jewels, even if only temporarily. This backwater suburb was only fifteen miles north-east of London's buzzing post-war metropolis, but a light year behind in terms of progressive thinking.

My mother was astute enough to know that, since I was about to start infant school, I should be told the truth about my origins, just in case my new pale-faced schoolmates asked me why I was brown when my parents were white. I had noticed that I was different, but I hadn't realized that it was any kind of a problem. Well, nothing much is a problem at four years old, other than not getting what you really want for birthdays and Christmases.

"Why didn't you tell me you felt sick," screamed my mother, as she landed a huge smack on my right leg, grabbed me by the arm and sent me upstairs to my bedroom as punishment.

"As if I haven't got enough work to do," she shouted as I howled my way upstairs.

I sat on my bed, running my hand over the large red handprint on my calf. The mark on my skin felt hot and tender, but the indelible print her words had left on my being was cold and hard.

In her defence, I have to tell you that she was taking Purple Hearts at the time, aka Drinamyl, a potent combination of amphetamine and barbiturate, a form of prescription 'speed' that was doled out by GPs from 1957 onward for menopausal women. It was also the drug de jour of the soon to come swinging '60s, loved by the Mods and Rockers that my mother's generation would so vehemently hate.

Since her marriage to Arthur Vickers at eighteen, she had spent nearly two and a half decades bringing up four sons, Trevor, Tony, Ken and Roger. She was now a 'woman of a certain age' who tired easily, but was still expected to fulfil a monotonous list of housewifely duties without the abundance of today's labour-saving devices. So drug companies made it their business to invent various potent little pills to help such women get the jobs done quicker. How else could women achieve the 'perfect fifties family home' that Hollywood films popularized and spouses expected? Unfortunately these little 'pick-me-ups' made her hopping mad about the least little thing.

I jumped off my bed and stared at my tear-stained face in the dressing table's triptych mirror. I looked different. Then I understood why. I was now a little 'coloured' girl who didn't have a real mummy and daddy. This new piece of information didn't fit me. It was like trying to insert the last piece into a jigsaw, only to find that it belonged to another picture.

My brain buzzed with all the new words that my mother had used. She had said that my 'real' father was from a place called Nigeria. Apparently he had dark-coloured skin. My 'real' mother had been a schoolgirl from the nearby town of Dagenham. No mention was made of the colour of her skin, so I assumed that she wasn't 'dark coloured'. This 'darkness of colour' was said in such a way that I instinctively knew that it wasn't seen as a good thing.

Until then, the only thing that had marred my blissfully ignorant existence was my hair, which was alternately described as "woolly," "wiry," or "fizzy" by three curious old aunts, all named after various fragrant flowers. Their cold, arthritically knobbed fingers, like the gnarly old winter branches on bare trees, loved to grab handfuls of it when they visited.

My least favourite aunt, named after the thorniest flower, usually dripped disappointment like a leaky tap whenever she talked about me. "Ooh-er," she invariably said as she rubbed a section of my hair between her forefinger and thumb, testing its texture, "I thought it was going to feel like a Brillo pad, but it's soft, just like wool."

Just to put her into context – she had sent me a golliwog for my first birthday present, which, ironically, I cherished for much of my childhood.

Another aunt, whose name evoked a tiny purple flower with a golden centre, was kinder and helpfully suggested to my mother: "I heard that you can tame all that fizz with a wet brush." She always used the word "fizz" instead of "frizz," as if I was an unruly bottle of pop that had been shaken too much. My third aunt, who was named after a fragrant flower that grew in valleys, was the only one of this sisterly triumvirate who thought my hair was pretty, but she was half blind. Her cloudy eyes had the same distant, yet myopic look that all cataract sufferers share. "Just like candy floss," she would say, as she patted my hairy confection.

Now it seemed that not only my hair was a problem, but the colour of my skin too ...