The Endings That Set Us Free

A sociologist explores the ways we leave one thing and move on to the next; how we anticipate, define and reflect on our departures; and our epiphanies when something is over and done with. 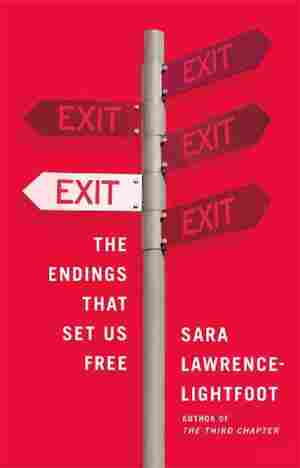 Marking The Moment With A Meaningful 'Exit'

June 11, 2012 • Exits are ubiquitous; long or short, grand or modest, we've all left something, from resigning from a long-held position to waving goodbye to a friend after lunch. In Exit: The Endings That Set Us Free, author Sara Lawrence-Lightfoot explores goodbyes through the stories of people in transition.

Marking The Moment With A Meaningful 'Exit'

When most of us think about home, we picture a physical place: the house where we grew up, the address we learned by heart in case we got lost, the room we painted hot pink when we turned eight and our parents allowed us to choose the color, the crack in the third flagstone step leading to the front door, the way no one used the front door anyway, since everyone came in through the back door right off the kitchen. Or our vision of home might be of the house where we now live with our children, where we make the mortgage payments each month and pay the electricity and oil bills, where we have set up a basketball hoop in the driveway for the kids to practice for the big games on Friday night up at the school, where we have barbeques for the neighbors on hot summer evenings, where the traffic and chaos of kids and dogs and busy schedules and homework are both comforting and exhausting. Our vision of home, whether it is the home of our childhood or the home we are creating as adults, has a location, an address, a mark on the map. It is a physical, tangible place. We have photo albums that chronicle our growing family over the years, everyone lined up on the front steps in the same pyramid arrangement — parents on top, kids on the bottom — with smiles that stay the same even as the bodies get bigger and bulkier.

Home is also the place where life is most familiar, where we fall into old patterns, where our roles become scripted and predictable, where there is a fine line between the bonds that bind and constrain. It is also a place where we live by secret codes and allusions that outsiders — even intimate outsiders — don't understand or appreciate. In her beautiful essay "On Going Home" (1961), Joan Didion speaks about the power and pull of home.

I am home for my daughter's first birthday. By "home" I do not mean the house in Los Angeles where my husband and I and the baby live, but the place where my family is, in the Central Valley of California. It is a vital though troublesome distinction. My husband likes my family but is uneasy in their house, because once there I fall into their ways which are difficult, oblique, deliberately inarticulate, not my husband's ways. We live in dusty houses ("D-U-S-T," he once wrote with his finger on the surfaces all over the house, but no one noticed it) filled with mementos quite without value to him (what could the Canton dessert plates mean to him? How could he have known about the assay scales, why should he care if he did know?) ...

Home, here, is defined as much by those who are outsiders — who have no real clue of what is going on, where signals seem opaque and oblique — as by those who have the inside track, who know the secrets and shadows, the habits and artifacts, the history of the family that lives in this house. Home is made more vivid by the contrasts that get drawn between the outsider's discomfort and cluelessness and the insider's ancient and intuitive understandings.

In his biography of the poet Wallace Stevens (1968), Robert Pack echoes Didion's portrayal of going home, drawing the connection between the intimacy and belonging that home represents and the intimacy with his readers that Stevens achieves through his poetry. Stevens translates the language, rhythm, and cadence from his childhood home into his verse, capturing the themes of family and the feelings of familiarity with which we can all identify. Writes Pack:

Home is the place where one understands the routine, knows the secret rhythms of family activity and communication, and feels the fullness of the presence of the familiar objects. It is this sense of intimacy that Stevens seeks with the world, and it is this sense of order a poet achieves that makes this intimacy possible.

Here we get a sense of home as the place where we learn to interpret the noises and the silences, the texts and the subtexts of our lives, where the layers and subtleties of our communication are inscribed in our hearts and minds, our bones and bodies, eventually turning up — at least in Stevens's and Didion's case — in the form and texture of their art.

The novelist Paule Marshall takes us a step further into the auditory dimensions and cadences of home. In her autobiographical novel, Brown Girl, Brownstones, she offers an evocative and searing portrait of an immigrant family transplanted from Barbados to Brooklyn, and she speaks about home as the sound of the language of the Bajan women as they sit talking in the kitchen. It is a language that Marshall herself heard as a child as she sat on the edges of the women's circle soaking up the gossip, the stories, savoring the rhythms and poetry of their words. In "From the Poets in the Kitchen," a short essay published in The New York Times, Marshall speaks about the language of home — particularly the talk among the women in the kitchen — that carried with it beauty, wisdom, poetry, and culture, that survived the transplantation from the blue-green sea and open horizons of Barbados to the city streets and brownstones of Brooklyn.

I grew up among poets — whatever that breed is supposed to look like. Nothing about them suggested that poetry was their calling. They were just a group of ordinary housewives and mothers, my mother included, who dressed in a way (shapeless housedresses, dowdy felt hats, dark, solemn coats) that made it impossible for me to imagine they had ever been young.

So whether we envision home as a place, a physical location on the map that we can now google for directions; whether we feel it in the familiarity, obliqueness, and intimacy of family; or whether we hear it in the language and poetry of our mothers, home is the place we return to. It is the place that forms us, that embraces and inhibits us, that shapes our identity. It is a place where our arrival is awaited.