Growing Up in the Nuclear Shadow of Rocky Flats

A narrative report by a woman who grew up near the Rocky Flats nuclear weapons facility describes the secrets that dominated her childhood, the strange cancers that afflicted her neighbors, her brief employment at Rocky Flats, and the efforts of residents to achieve legal justice. 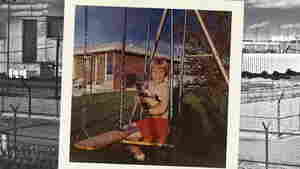 June 12, 2012 • Kristen Iversen spent her childhood in the 1960s in Colorado near the Rocky Flats nuclear weapons factory, playing in fields that now appear to have been contaminated with plutonium. In Full Body Burden, she investigates the environmental scandal involving nuclear contamination around her childhood home.

It's 1963 and I'm five. I lie across the backseat of the family car, sleeping with my cheek pressed against the vinyl. My mother sits in the front with baby Karin and my father drives, carefully holding his cigarette just at the window's edge. This is how I remember my mother and father: smoking in a cool, elegant way that makes me want to grow up quick so I can smoke, too. It's evening and I'm tired and cranky. The spring day has been spent on a long drive through the Colorado mountains, a Sunday ritual.

We turn the corner to our home on Johnson Court, the square little house my parents bought when my father left his job as an attorney for an insurance company and set up his own law practice. The neighborhood is made up of winding rows of houses that all look like ours: a front door and a picture window facing the street, two windows on each side, and a sliding door in the back that opens to a postage-stamp backyard. We have a view of the mountains and one tree.

"Jesus." My dad stops the car. I scramble to my knees to look.

Our house is smoldering. One side is gone. A fire truck and a police car with streaking red lights stand in the driveway.

My dad jumps out and my mom reaches over and pulls up the parking brake. "Dick," she says, "I'm taking Kris to the neighbor's." My mother is always good in a crisis.

Mrs. Hauschild is waiting at her door. She takes a pair of pajamas from her daughter's room—we're almost the same age—and she beds me down in the basement in a sleeping bag. "She'll be fine here," Mrs. Hauschild says. "She doesn't need to see all that commotion." She suggests they both have a drink and a cigarette. My mother nods.

"Someone must have left the lamp on in Kris's bedroom," my mother says as they walk up the stairs. "The drapes caught on fire."

I repeat these words in my head until I come to believe I set the fire myself. I can still picture my bedside lamp, the brass switch, the round orange globe always warm to the touch.

Years later—decades, in fact—my father laughs when I tell him this story. "You didn't cause that fire, Kris," he says. "Your mother and I did. We had been sitting and talking in the living room, having a drink together, and we left a burning cigarette in the ashtray. Neither of us noticed. The drapes in the living room caught fire first." The flames never reached my room.

This is how I want to remember my parents: still talking to each other, even when the world was tumbling down around their ears.

We rent a basement apartment for a month and then move back to our rebuilt house. Nothing is ever said about the fire. Nothing is ever said about dark or sad or upsetting events, and anything that involves liquor is definitely not discussed. My parents are elegant drinkers. My mother can make a Manhattan with just the right splash of whiskey and vermouth. My father takes his bourbon straight on ice. After dinner, once my mother has tucked us into bed, my parents make cocktails and play cribbage to determine who has to do the dishes. From my bedroom I can hear my mother's soft laugh. Sometimes there's a stack of unwashed plates in the sink when we leave for school in the morning.

Soon another baby is born: my sister Karma. This is not a hippie name, despite the fact that we live close to Boulder. My mother insists on naming her daughters after her Norwegian heritage: Kristen, Karin, Karma.

At the top of the hill behind our house stands the Arvada cemetery. The year 1863 is etched in a stone marker at the entrance. The cemetery works like a magnet. As soon as our mother puts us out into the yard for the afternoon—just like the kids and grandkids on the family farm back in Iowa, who were expected to fend for themselves for the day—Karin and I scramble over the fence and head for the hill. We are our own secret club, and Karma joins us as soon as she is old enough to toddle along. Sometimes the other neighbor girls—Paula, Susie, and Kathy— are allowed into the club as temporary members. We trek across the field behind the row of backyards and through the old apple orchard and get up to the creek, where we balance a flat plank across the shallow, sluggish water and tiptoe across. Water spiders dance across the surface and tiny minnows scatter when we push our toes into the muddy bottom.

At the crest of the hill stand row after row of headstones. Some are tall, others flat against the ground. Some have the names of children or images of their faces etched in the stone, and we stay away from those. We run up and down the rows, shrieking and gathering up the plastic flowers. We pile all our flowers in the middle and sit in a circle around them. We look down the hill to our house and imagine our mother, big and round, lying on her bed and waiting for the next baby, a boy at last, she's sure of it. A little farther, we can see the Arvada Villa Pizza Parlor and the Arvada Beauty Academy. Between our neighborhood and the long dark line of mountains stands a single white water tower, all by it- self. The Rocky Flats water tower. There is a hidden factory there.

That hidden factory is the Rocky Flats Nuclear Weapons Plant, a foundry that smelts plutonium, purifies it, and shapes it into plutonium "triggers" for nuclear bombs. The plant also recycles fissionable material from outmoded bombs. A largely blue-collar link in the U.S. government's nuclear bomb network, Rocky Flats is the only plant in the country that produces these triggers—small, spherical explosives that provide an atomic bomb's chain reaction. The triggers form the heart of every nuclear weapon made in America. From 1952 to 1989, Rocky Flats manufactures more than seventy thousand plutonium triggers, at a cost of nearly $4 million apiece. Each one contains enough breathable particles of plutonium to kill every person on earth.

Rocky Flats' largest output, however, is radioactive and toxic waste. In all the decades of nuclear weapons production, the nuclear weapons industry produces waste with too little thought to the future or the environment. The creation of each gram of plutonium produces radioactive waste, virtually all of which remains with us to the present day.

But no one in our community knows what goes on at Rocky Flats. This is a secret operation, not subject to any laws of the state. The wind blows, as it always does. I imagine the bones of pioneers and cowboys beneath our feet. The chill of evening begins to creep up the hill; the air turns cold when the sun dips.

"Let's go!" Karin yells, and we jump to our feet and roll and tumble down the hill. We bounce across the plank and race across the field, full speed, before the sun sets and the ghosts come out.

In the beginning, Rocky Flats is called Project Apple. In 1951, years before I'm born, a group of men from the Atomic Energy Commission (AEC) meet in an old hotel off the beaten track in Denver. No press, no publicity. Their job is to find a site to build a secret bomb factory that will carry out the work that first began with the Manhattan Project, the covert military endeavor that developed the first atomic bomb during World War II.

Until now, all nuclear bombs in the United States have been custom- built at the weapons research and design laboratory at Los Alamos, New Mexico, with materials supplied from the plutonium production facility at the Hanford site in eastern Washington State and the uranium enrichment facility at Oak Ridge, Tennessee. But with the heightening Cold War—a high state of military tension and political conflict with the Soviet Union and its allies that will continue for decades—the United States wants to mass-produce nuclear weapons. They need a roll-up your-sleeves, get-down-to-business, high-production bomb factory. An assembly line.

AEC officials choose a site on a high, windy plateau not far from the growing cities of Arvada, Boulder, and Denver—cities that can provide workers and housing. Landowners are forced to sell their land to the government, and construction on Project Apple begins immediately.

A few months later, the Denver Post breaks the news of the new plant with the headline there is good news today: AEC to build $45 million a-plant near Denver. Announcement of the plant catches every- one by surprise, including state and city officials, and the news breaks like a thunderbolt over the community. Though owned by the AEC, the plant will be operated by Dow Chemical, a private contractor that will be indemnified against any accident or mishap. The Rocky Flats Nuclear Weapons Plant will become the workhorse of an AEC complex of weapons facilities that eventually includes thirteen sites from Nevada to Kansas to South Carolina. Each AEC facility will be involved in its own particular aspect of the design, manufacture, testing, and maintenance of weapons for the U.S. nuclear arsenal.

Components and processes will be divided up around the country, but Rocky Flats will be one of two sites designed to produce the fission- able plutonium "pits" at the core of nuclear bombs. (After 1965 it will be the only site.) The whole system depends upon Rocky Flats.

Construction of the plant is rushed. Few people know the deal is in the works. Not even the governor has an inkling. Colorado's top elected officials are not informed that the plant will be built until after the decision is made and there's no going back. But Denver welcomes the windfall. No one knows what the factory will produce. No one cares. It means jobs. It means housing. Contractors, the local power plant, and local businesses all look forward to the "juicy plum" to be known from now on as Rocky Flats.

It's the Cold War. The bombs dropped on Hiroshima and Nagasaki in 1945 may have ended one war, but they started another. The perceived Soviet threat is an ever-present shadow in American life. The Atomic Energy Act of 1946 creates an impenetrable wall of secrecy around the U.S. nuclear establishment. All government decisions and activities related to the production of nuclear weapons will be completely hidden. Information about nuclear bombs, toxic and radioactive waste, environmental contamination, and known and unknown health risks to workers and local residents is all strictly classified. And no one asks questions.

From the book Full Body Burden: Growing Up In The Nuclear Shadow of Rocky Flats by Kristen Iversen, published by Crown, a division of Random House, Inc. Reprinted with permission.