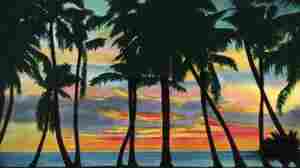 August 13, 2012 • In Victoria Kneubuhl's mysteries, dashing detectives Ned and Mina explore the darker side of a sunny tourist paradise — Honolulu. In their debut, Murder Casts a Shadow, Ned and Mina set out to discover who killed a crooked museum curator, and get drawn into a deeper mystery about the death of Hawaii's last king.

On the morning of January 2, 1935, it was raining. Ned woke to the sound of water. From his half sleep, he realized it was water pouring from a drainpipe — the one off the roof, just outside his window.

A breeze came and went through the screen, lifting the thin white curtain. It swayed the garden bamboo into a rolling clatter, and made the morning feel clean and refreshing.

Ned sat up, yawned and looked out the window. The house, up in Maunalani Heights, floated over a lake of clouds while somewhere below the city of Honolulu began another day. He thought he could smell carnations from the farms that stretched across the middle of the hill, separating the residential area at the summit from the rest of the city with a one-mile border of flowers. Maybe he imagined the fragrance. His imagination always seemed more alive in Hawaiʻi. He could relax. He wasn't the oddity that he was in London, or the oddity he felt he'd become in his birthplace, Āpia, Western Sāmoa. Honolulu was a mixture of all kinds of odd people and things. A part Sāmoan playwright and theatrical director, sometimes discreetly employed by a certain agency of the British government, was no more peculiar in Honolulu than the Chinese chief of police whose calligraphy and landscape paintings sold at high prices in the best galleries of San Francisco. Honolulu would be a place to live, mused Ned, floating in the ocean, between so many worlds. All it lacked was a professional, progressive theatrical community.

Ned found himself in Honolulu for two reasons. The first and less well known was his role as the chaperone of three important portraits being shipped from the British Museum to the Bishop Museum. It was a simple diplomatic request and a favor to the museum. It was much less complicated than other unofficial assignments he had been given, ones that required secrecy and employed his excellent skills of detection. Ned's public profile as a playwright of independent means suited his unofficial government employers. The second and much more publicized occasion for his visit was the production of his play, A Long Way Home, by the Honolulu Community Players. The Players had also asked him to direct the production, a job he had declined in the most polite way. Instead, he volunteered to consult with a local director. The theatre had chosen a young man, a recent graduate of Yale University, and said to have some real creative talent.

Ned looked out at the view and thought about how he had visited Hawai'i several times and never left the island of O'ahu. He decided that he would make an effort to see some of the other Hawaiian Islands on this trip. He wondered if it might give him time to plan a new work — something with echoes of symbolism and a mythological feeling, maybe something to do with rain and a house standing all alone on a high hill.

Ned's reverie was broken by the rude voice of his host, Todd Forrest, yelling. "Son of a bitch, Nyla, what the hell happened? There's no goddamn hot water!"

Next Ned heard Todd clumping down the stairs, an inaudible jumble of conversation between husband and wife, some stomping to the garage, clanking, banging, something that sounded like it might be kicking followed by general kitchen noises. Then Ned heard Todd bounding up the stairs toward him. Without knocking, Todd stuck his handsomely chiseled face in Ned's room.

"Hey, don't get in the shower for the next half an hour or you'll be in for a rude experience. Yesterday, the plumber turned the heater off and forgot to turn it back on."

"What's that? You're not going to have your man servant draw my bath?" Ned rolled over

into a lazy pose.

"Sorry old man, it's his day off. You'll have to take a nasty American shower. Come down while the water heats up, Nyla's making coffee." Todd disappeared as fast as he had appeared.

A few minutes later, Ned stood downstairs looking out of the window at the magnificent view that stretched out before him. The morning rain clouds had vanished, and he could see the city below and the surrounding sea. Maunalani Heights lay behind Diamond Head, just above the Honolulu suburb of Kaimuki. The Forrests' home sat on the top of the hillside that rose from a broad base to an elevation of about a thousand feet. Behind the heights ran the ridges of the Ko'olau Mountains separating the leeward and the windward sides of the island. The house looked toward Diamond Head and the sea, with a sweeping view of Honolulu, Pearl Harbor, and beyond to the Ewa plain. The elevation kept the temperature at least seven degrees cooler than in the lowlands, and the frequent rain allowed for the cultivation of exquisite tropical gardens. Ned stared at the ocean to where it met the horizon. Today the line was subtle and diffuse, a change of color from the dark blue of the Pacific to the pale blue sky.

"You look so serious, Ned." Nyla's voice never felt intrusive. From a blend of her Hawaiian, Irish, and English ancestry she had inherited her father's pale green eyes and her mother's dark hair, which this morning was pinned up in a pretty twist. Her skin was smooth and golden brown. Although Nyla came from a very wealthy island family, Ned had always known her to be unassuming, warm and kind to everyone she met. "What sort of wool are you gathering this early in the morning?"

"Old wool, the familiar kind. You know, the sort we always come back to." Ned answered.

"Well, right now, you have to come to the kitchen for one of Todd's fabulous breakfasts." Nyla took his arm and led him to the kitchen. "He'll have a fit if we don't eat right away."

Nyla seated him at a table set with flowers, cloth napkins, bowls of fruit, a stunning omelet in the center, and champagne. Todd raised his glass. "To the successful delivery of the Kalākaua portraits from the British Museum to the Bishop Museum. "

"In their exquisite frames designed by the artist, " Nyla added.

"May the ancestors reign forever in their homeland," Ned responded, as they touched glasses.