Brian Evenson explores how humans can persist in an increasingly unreal world. In 10 shorts stories, Windeye depicts people losing touch with reality, or for whom reality has become frightening, dark and unsettling. 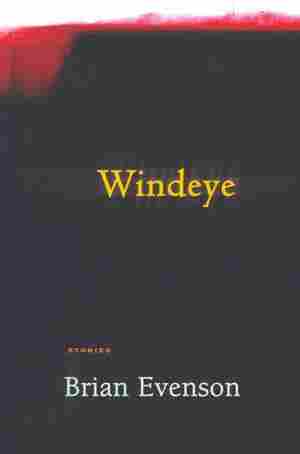 June 21, 2012 • Brian Evenson's collection of 25 short stories examines the metaphysical in a blend of horror, sci-fi and Beckett. It's the most fun you can have contemplating your mortality.

His sister, he saw, was standing beside him, staring at him. He tried to explain it to her, tried to put a finger on what fascinated him. This house, he told her. It's a little different. There's something about it ... But he saw, from the way she looked at him, that she thought it was a game, that he was making it up.

"What are you seeing?" she asked again, with a grin.

Why not? he thought. Why not make it a game?

"What are you seeing?" he asked her.

Her grin faltered a little but she stopped staring at him and stared at the house.

"Is there something wrong with it?" he prompted.

She nodded, then looked to him for approval.

Her brow tightened like a fist. "I don't know," she finally said. "The window?"

"What about the window?"

He covered his mouth with his hand. She was smiling and nodding, but he couldn't go on with the game. Because, yes, that was exactly the problem, there was one more window on the outside than on the inside. That he knew was what he'd been trying to see.

But he had to make sure. He had his sister move from room to room in the house, waving to him from each window. The ground floor was all right, he saw her each time. But in the converted attic, just shy of the corner, there was a window at which she never appeared.

It was a small and round, probably only a foot and a half in diameter. The glass was dark and wavery. It was held in place by a strip of metal about as thick as his finger, giving the whole circumference a dull, leaden rim.

He went inside and climbed the stairs, looking for the window himself, but it simply wasn't there. But when he went back outside, there it was.

For a time, it felt like he had brought the problem to life himself by stating it, that if he hadn't said anything the half-window wouldn't be there. Was that possible? He didn't think so, that wasn't the way the world worked. But even later, once he was grown, he still found himself wondering sometimes if it was his fault, if it was something he had done. Or rather, said.

Staring up at the half-window, he remembered a story his grandmother had told him, back when he was very young, just three or four, just after his father had left and just before his sister was born. Well, he didn't remember it exactly, but he remembered it had to do with windows. Where she came from, his grandmother said, they used to be called not windows but something else. He couldn't remember the word, but remembered that it started with a v. She had said the word and then had asked, Do you know what this means? He shook his head. She repeated the word, slower this time.

"This first part," she had said, "it means 'wind.' This second part, it means 'eye.'" She looked at him with her own pale, steady eye. "It is important to know that a window can be instead a windeye."

He was worried she was going to ask questions, but she didn't. And then they went into the house to look again, to make sure it wasn't a window after all. But it wasn't there on the inside.

Then they decided to get a closer look. They had figured out which window was nearest to it and opened that and leaned out of it. There it was. If they leaned far enough, they could see it and almost touch it.

"I could reach it," his sister said. "If I stand on the sill and you hold my legs, I could lean out and touch it."

"No," he started to say, but, fearless, she had already clambered onto the sill and was leaning out. He wrapped his arms around her legs to keep her from falling. He was just about to pull her back inside when she leaned farther and he saw her finger touch the windeye. And then it was as if she had dissolved into smoke and been sucked into the windeye. She was gone.

It took him a long time to find his mother. She was not inside the house, nor was she outside in the yard. He tried the house next door, the Jorgensens, and then the Allreds, then the Dunfords. She wasn't anywhere. So he ran back home, breathless, and somehow his mother was there now, lying on the couch, reading.

He tried to explain it best he could. Who? she asked at first and then said Slow down and tell it again, and then, But who do you mean? And then, once he'd explained again, with an odd smile:

"But you don't have a sister."

But of course he had a sister. How could his mother have forgotten? What was wrong? He tried to describe her, to explain what she looked like, but his mother just kept shaking her head.

"No," she said firmly. "You don't have a sister. You never had one. Stop pretending. What's this really about?"

Which made him feel that he should hold himself very still, that he should be very careful about what he said, that if he breathed wrong more parts of the world would disappear.

After talking and talking, he tried to get his mother to come out and look at the windeye.

"Window, you mean," she said, her voice rising.

"No," he said, beginning to grow hysterical as well. "Not window. Windeye" And then he had her by the hand and was tugging her to the door. But no, that was wrong too, because no matter which window he pointed at she could tell him where it was in the house. The windeye, just like his sister, was no longer there.

And that was when the trouble really started.