A Life in Minor League Rock and Roll

Watershed's Joe Oestreich reflects on his band's flirtation with success in the '80s, followed by the loss of a record deal and a continuing effort to make music despite failing in the industry. 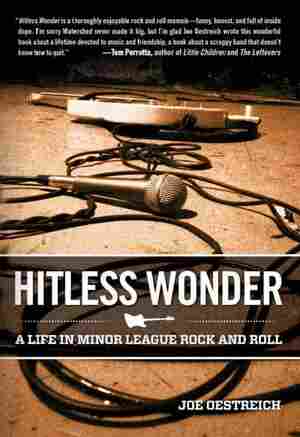 July 1, 2012 • Most people have never heard of Watershed, but the Columbus, Ohio, rock band has been doggedly touring and recording for a quarter-century. A new memoir by founding member Joe Oestreich profiles a life on the road, powered more by passion than optimism.

By most quantifiable standards, playing in a rock band is stupid. Five paying civilians at five bucks a head means come 2:00 a.m., Watershed will make twenty-five dollars at the door. Divided by the four guys in the band, that's $6.25 each. But nobody will pocket his six-and-a-quarter. We almost never see any cash. Instead we pay. For the gas. For the hotels. For the trips up and down the Wendy's Supervalue Menu. We dig into our pockets to cover five or six shows in a row, hoping to eventually land a high dollar gig that will get us all reimbursed. Sometimes this gamble works, sometimes not. On our most lucrative tours, we come home with a hundred bucks or so. Usually we lose twice that. So we bankroll the gigs the American way: with credit cards. Rock now, pay later. Even Biggie, the tour manager, is out here on his own nickel. The only member of the Watershed camp guaranteed to land in the black is Ricki C., who works for the cut rate of twenty-five dollars a day. And he only turns a profit because he can eat for a week on Hostess cupcakes and skim milk.

When Biggie filled up the tank in Columbus this afternoon, he paid $3.09 a gallon. The drive to Detroit was two hundred miles. At fifteen mpg — and fifteen is a generous estimate considering the Econoline is loaded with four band members, two crew guys, our bags, and all the amps, drums, and guitars — we've already burnt $41.19 in fuel. We haven't yet played a note, and the one thing I know for sure about tonight's show is that we'll lose money. At closing time, Biggie will settle up with the doorman, and then he'll stuff the bills into the gray pouch he keeps stashed in the dashboard. Tomorrow, tonight's twenty-five dollar take will get us a third of the way to Milwaukee. Here in the minor leagues, bands don't play for sex, fame, and fortune. They play for gasoline.

An economist would tell us that by driving three hours to perform for five people, we have not behaved in our monetary self-interest. It's Econ 101, supply and demand. There clearly isn't much demand for Watershed in Detroit, so we would have been smart to cut off the supply by staying home. Get a good night's sleep. Wake up tomorrow and commute to our real jobs, jobs that actually pay. I used to think of gigs like this as investments in the future. We're paying dues now, I'd tell myself, for the big rockstar payoff later. The trouble is I'm now thirty-eight years old. So is Colin. Dave is forty-three. Pooch is the youngest at thirty-five. By music business standards, we're too damn old for the rockstar payoff. So now I have to wonder, what future? Besides, we already had a shot at stardom. And we whiffed.

Remember your crappy high school band? The one you formed after you finally got that guitar for your birthday? You practiced down in the basement, learning "Smoke on the Water" and "Ironman" and "You Really Got Me," crossing your fingers you'd stick together long enough to write a song that some other crappy high school band might one day cover. A couple years later you called it quits, bowing to the entropic forces that went to work starting with that very first practice: egos, insecurities, differing motivations. Because crappy high school bands are supposed to break up, like the Bryan Adams song: Jimmy quit. Jody got married.

Colin and I started it the summer before our junior year. We didn't know Dave and Pooch back then, but Biggie was with us, setting up gear and getting us to the stage on time. In the years since, we've played over a thousand shows, in thirty-four states and 116 cities. We've humped our amps through the doors at CBGB ten times. We've played the House of Blues on the Sunset Strip, The Metro in Chicago, The Rat in Boston. We've played on South Street in Philly, on Sixth Avenue in Austin, at the 7th Street Entry in Minneapolis, and above a gay bar called Rod's in Madison. We've played fifty-eight different venues in Columbus alone. Small's Bar is the fifteenth place we've played in Detroit. We've released six full-length albums; a batch of cassettes, 45s, and EPs; a couple videos; and a DVD. Colin, Biggie, and I have been together longer than The Beatles, The Doors, and Nirvana combined.

Watershed's long haul hasn't been all sparse crowds and dive bars. At one point we almost made it. We were limo'd around Manhattan. We recorded in the same studio as AC/DC, Aerosmith, and Springsteen. We played arenas and amphitheaters, headlining shows in front of thousands, opening for bands everybody's heard of. We were treated to fancy dinners and promised by insiders that we were the Next Big Thing. But we never had a hit song. Never had a video on MTV. Never won the notoriety that comes measured in songwriting residuals or on the Billboard Hot 100. And yet somehow we've stayed in the game for two decades, like a hustling utility man with a great glove but no bat, a hitless wonder.

By now, most musicians we've shared the stage with, famous and not, have packed away their guitars and decided to sell real estate or insurance. In the Fifties, in fact, "selling insurance" was a euphemism for quitting. Hey, what's Bill up to? Bill could be a shoeshine boy or a CEO, but if he was no longer rocking, he was selling insurance. Then again, in the Fifties, one nickname for the guitar was the "starvation box," so it should surprise no one that rock and roll has always been a struggle. The story here is not that Watershed has had it tough; every band has it tough. The story here is that most bands with Watershed's career arc quit long before they're reduced to playing for crowds they can count on one hand.

So maybe doing this show is a little stupid. Maybe we've booked this tour because we've built an inertia that's stronger than our better judgment. But I suspect the real reason is a million times simpler and more complicated. Watershed has dragged ourselves up to Detroit because we're a rock band, and playing live — whether it's for five people or fifteen thousand — is what rock bands do. Stupid or not.