by Pauline A. Chen

The Red Chamber, an epic reimagining of the Chinese classic Dream of the Red Chamber, is set against a backdrop of 18th-century Beijing and follows the intersecting lives of three women, including the orphaned Daiyu, who leaves her home in the provinces only to be tangled in a web of intrigue with ties to the Emperor's Palace.

NPR stories about The Red Chamber 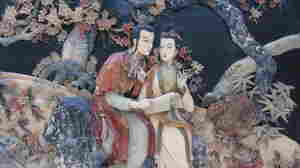 July 15, 2012 • Before most Chinese readers learned of Romeo and Juliet, they fell for Dream of the Red Chamber. The 18th-century novel follows a love triangle between a boy and his two female cousins. It's been called China's greatest literary work, and now a new adaptation hopes to introduce it to an American audience.

Lin Daiyu crushes apricot kernels and black sesame seeds in a marble mortar. She scrapes the medicine into a bowl of stewed bird's nests and stirs it with a porcelain spoon. She brings the bowl to her mother's bed near the window. Propped against her bolsters, Daiyu's mother sips the dose, grimacing a little. Daiyu watches every mouthful, as if by her vigilance she can somehow will the medicine to work.

Mrs. Lin lies back, exhausted even by the act of drinking. "Daiyu," she says, her voice a reedy thread.

"I want to show you something."

"Go and look in the bottom of my old trunk."

Daiyu kneels before the wardrobe and opens the battered chest where the family keeps their winter clothes. She rummages beneath the piles of bulky padded trousers and quilted jackets, and finds a flat bundle in a crimson brocade wrapping cloth.

Her mother's thin fingers struggle with the knot, and Daiyu leans over to help. Inside are two flat boxes. Mrs. Lin opens one to reveal a necklace of reddish gold in the form of a coiling dragon. In the other is a tiara of flying golden phoenixes, a string of pearls arching from each beak.

"These are from your dowry, aren't they?"

Mrs. Lin does not seem to hear the question. "Help me up," she says.

Daiyu climbs onto the bed and adjusts the pillows so that her mother is sitting upright. Her mother places the tiara on her uncombed hair. "Bring me a mirror."

Reluctantly, Daiyu gets the one on the dressing table. Leaning against the cushions, her mother tilts the tiny bronze hand-mirror back and forth, catching little glimpses of herself on the polished surface. "What a fine young lady I was back then, looking down my nose at everything. Why, I'd never even touched, let alone worn, silks like these, made by common weavers." Her fingers pluck at the worn honey-colored material of her robe. "Everything we wore was made in the Palace by the Imperial Weavers. Even our maids didn't wear such stuff!"

Daiyu's mother laughs a little, as if marveling at her younger self.

"I was fond of fine things in those days, and my parents spoiled me by giving me anything I wanted. My eldest brother, Jing, didn't mind, but my second brother, Zheng, was always jealous."

Daiyu sits by her mother's feet, watching the play of expression on her face.

"I remember one New Year's, when our grandfather — the first Duke of Rongguo — was still alive. He asked us to write lantern riddles in verse. When he read what the three of us had written, he said it was a pity I hadn't been born a boy, for I would have been sure to win the Jias glory if I had been allowed to take the Civil Service Exams."

Daiyu nods. Her mother loved poetry, and had taught Daiyu the rules of meter and rhyme as soon as she could read.

"As it was, Zheng had to take the Exams I don't know how many times until he passed. Your father passed the first time, of course. But in the end, Zheng did pretty well for himself." To Daiyu, her mother's voice sounds slightly grudging. "Under-Secretary in the Ministry of Works. Zheng always ways a hard worker."

"What about your eldest brother?"

"Jing never did pass. All he did was fritter away my father's money on concubines and gambling." The reminiscent smile fades from Mrs. Lin's face, and her expression grows somber. She hands Daiyu the mirror and plucks the tiara off her hair. "And now Zheng is the only one of us who is still alive, and living at Rongguo Mansion with my mother."

"Do I have any cousins there?" Daiyu says.

"Haven't I told you about him?" Her mother's delicate eyebrows arch in surprise. "He's Zheng's son. He was the one born with the jade in his mouth. That's why your grandmother named him 'Baoyu,' 'Precious Jade.'"

"How could a person be born with a jade in his mouth?"

"Who knows?" Mrs. Lin shrugs. "All I know is that my mother--your grandmother-- thinks it's a miracle, and spoils him to death. His own mother died when he was barely twelve or thirteen, and from all I've heard he's turned into a rare handful. He skips school every other day, and runs around with his girl cousins in the Women's Quarters instead of studying."

"Eighteen — more than old enough to take the Exams. Your other male cousin, Lian, is more than twenty-five, but they gave up on his passing years ago. He's Jing's son. Like father, like son, I suppose. I don't know how the Jias are going to keep up their prestige, if they don't have more sons entering the Civil Service. If Baoyu doesn't pass — " Mrs. Lin pauses, coughing, then leans back against the pillows with her eyes shut, trying to catch her breath.

Daiyu climbs onto the bed and eases her mother into a lying position. She wipes her mother's lips.

After Mrs. Lin's breath has slowed, she says, still with her eyes closed, "You'll have to go live with them, you know, after I die."

"You won't die," Daiyu says quickly, but even to her own ears her voice lacks conviction.

"I want you to go to the Capital."

"Why?" Daiyu starts to cry.

"You'll be able to make a good match there — someone from one of the big families. The Jias will see to that."

"What does that matter?" Daiyu cries. "You didn't have a match like that." Though her father comes from an old and educated family, he had been the sole offspring of an only child; and now only distant members of the clan, whom she has never met, are still alive. "Why can't I stay here?"

Her mother lies silent for a long time, staring at the ceiling. At last she says, "When I was young, I didn't think anything mattered as long as I was with your father. Now, since I've gotten sick, I've realized how hard it is to be without any family." Her eyes turn to Daiyu, and Daiyu sees they are full of tears. "I'm worried about what will happen to you when I'm gone. I don't want you to have to struggle like I did . . . "

Her words fill Daiyu with something akin to panic. "But — but you've been happy with father, haven't you?"

Mrs. Lin doesn't answer. Her eyes move past Daiyu to the phoenix tiara on the dressing table. "We should never have raised you like this."

"Keeping so much to ourselves. You've never met people your own age and background." She looks back at Daiyu and her eyes are almost challenging. "Well, you'll have to learn how to get along with other people at Rongguo. You'll need to learn to think before you speak." She puts out her hand, and Daiyu takes it, feeling how cool her fingers are. "Still, you mustn't let them cow you. You're strong enough to stand up to them."

Daiyu wants to ask more questions, but her mother starts to cough again. This time she coughs so long and hard that Daiyu rushes to get a spittoon. Mrs. Lin spits out a mouthful of phlegm scarlet with fresh blood. When her mother finally stops coughing, Daiyu does not say anything more, just climbs into bed beside her. She feels how small and frail her mother has grown over the last six months, her limbs like twigs against her own strong, warm body; yet her mind shrinks from picturing a future without her. She nestles her face deeper in the crook of her mother's neck, and sniffs for the last lingering scent of her skin not yet obscured by medicine and sickness.