And Other Adventures in the World's Most Polluted Places

Andrew Blackwell takes a jaunt through the most gruesomely polluted places on Earth, from the hidden bars and convenience stores of a radioactive wilderness to the sacred but reeking waters of India. Blackwell visits a rogue's gallery of environmental disaster areas in search of a deeper understanding of what's really happening to our planet. 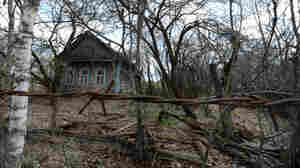 The abandoned village of Vezhishche in Belarus sits within the exclusion zone established after the 1986 Chernobyl nuclear disaster. The zone was one of Andrew Blackwell's first stops on his tour of the world's most ruined places. Victor Drachev/AFP/Getty Images hide caption

'Sunny Chernobyl': Beauty In A Haze Of Pollution

July 14, 2012 • In some of the dirtiest places on Earth, author and environmentalist Andrew Blackwell found something worth looking at. His book, Visit Sunny Chernobyl, tours the deforestation of the Amazon, the oil sand mines in Canada and the world's most polluted city, located in China.

'Sunny Chernobyl': Beauty In A Haze Of Pollution

We had entered the Exclusion Zone.

At the Chernobylinterinform administrative building, in the town of Chernobyl — nearly ten miles distant from the reactor itself — we met Dennis, my escort. Standing at the top of the steps to the low, yellow building, Dennis matched the quasi-military vibe of the zone. He was in his mid-twenties, with an early baldness made irrelevant by a crew cut, and wore combat boots and a camouflage jacket and pants. The look was completed — and the martial spell broken — by a black sleeveless T-shirt printed with the image of a football helmet, around which swirled a cloud of English words. A pair of wraparound sunglasses hid his eyes.

"First is the briefing," he said coolly. "This is upstairs." And with that he walked back into the building.

The briefing room was a long, airy space, its walls hung with photographs and maps. A wooden table surrounded by a dozen chairs dominated the center of the room. The floor was covered with an undulating adhesive liner printed to look like wood paneling. Must make for easy cleanup, I thought, in case anyone tracks in a little cesium.

Dennis and I were alone. The summer season hadn't picked up yet. He retrieved a gigantic wooden pointer from the corner, and we approached a large topographic map on the front wall. He began diagramming our itinerary using his tree limb of a pointer, though the map was mere inches in front of us.

"We are here. Chernobyl," he said, and tapped on the map. "We will drive to Kolachi. Buried village." He tapped again. "Then to Red Forest. This is most radioactive point today." He looked at me for emphasis. He was still wearing his sunglasses.

Turning back to the map, he continued. "From here we will go to Pripyat. This is deserted city. Then we can approach reactor to one hundred and fifty meters."

It was the standard itinerary, allowing visitors to inhabit their preconceptions of Chernobyl as a scene of disaster and fear--but without actually straying off the beaten path or risking contamination. This was, after all, what most people wanted. But I hadn't come all this way only to wallow in post-nuclear paranoia. I was here to enjoy the place, and this was the moment to make it happen.

Dennis regarded me blankly from behind his shades. In their silvery lenses, I could see the reflection of someone who looked like me, with an expression on his face that said, Yes. I am an idiot.

"This is not possible," said Dennis.

"Well, if there's any way to get on the water, or maybe visit the local fishing hole, I'm happy to sacrifice part of our planned itinerary."

The conference room was quiet. The shadow of a grimace passed across Dennis's face. "This is. Not possible," he said, without emotion. He was proving witheringly immune to what I had hoped would be my contagious enthusiasm. But it's at moments like this, when you're trying to take your vacation in a militarily controlled nuclear disaster zone — for which, I might add, there is no proper guidebook — that you must be more than normally willing to expose yourself as a fool in the service of your goals. I laid my cards on the table.

"Look. Let's say I wanted to go for a boat ride with some friends somewhere in the zone," I said. "Just theoretically speaking, where would we go? I mean, where are the really nice spots?"

A faint crease had developed in the dome of Dennis's head.

I pressed on, telling him that I was trying to approach this not so much as a journalist or a researcher, but as a tourist. As a visitor. Where, for instance, could I find a good picnic spot in the Exclusion Zone? Where did he himself go on a slow day? And if it wasn't possible in the zone, what would be the next best thing? I pointed to Strakholissya, just outside the zone, a town that I had identified while poring over a map the night before. What about that?

"Yes, this is nice place," said Dennis. "You can go fishing here."

I was making progress. Fishing?

"Yes," said Dennis, gaining speed, "but this place is better." He pointed to Teremtsi, a tiny spot nestled among a bunch of river islands deep inside the zone. "This is a good place for fishing," he said. "I went once. Mostly I go there to collect mushrooms."

I stared. Mushrooms, because they collect and concentrate the radionuclides in the soil, are supposed to be the last thing you should eat in the affected area. And Dennis gathered them in the heart of the Exclusion Zone.

"You collect mushrooms? And you eat them?" There was awe in my voice.

"Yes, this is clean area, I know. This is no problem."

I couldn't believe my luck. A total newbie, I was already teamed up with a guy who used the zone as his own mushroom patch and trout stream. I wanted to abandon our itinerary. Who needs to see a destroyed nuclear reactor when you can go fishing just downriver?

Don't think I didn't beg. But Dennis was far too professional to chuck the official program — with all its approved paperwork, stamped and signed in duplicate for each checkpoint — just because some half-witted foreigner said pretty please. But this time, there was a moment's hesitation. "This is, um. Not possible," he said, getting back on script. But I saw the hint of a smile on his face as he turned away from the map.

The briefing continued down the side wall of the room, from one diagram to the next. There were a pair of maps showing the distribution of contamination by radioactive isotopes of cesium and strontium in the zone. The contamination is wildly uneven, depending on where the radioactive debris fell immediately after the explosion, and on the wind and rain in the days and weeks that followed, when the open reactor core was spewing a steady stream of radioactive smoke and particles into the air. The weather of those following weeks is inscribed on the ground, in contamination. The maps showed the distribution, color-coded in shades of red and brown, a misshapen starfish with its heart anchored over the reactor.

The radiation level at any given spot also varies over time, although based on what, I'm not quite sure. So there are limits set for what is considered normal, just as there are in any city. Dennis told me that the standard in the town of Chernobyl was 80 microroentgens per hour. In Kiev, it was 50. (It's about the same in New York, where background radiation alone gets you about 40 micros per hour.)

"In the last month, I measured 75 micros at different places in the town," he said. Chernobyl was pushing the limit. But I was unclear what the standards for radiation levels really meant. In Kiev, for example, what difference did it make that the standard was 50 micros instead of 80, or 100?

"It means," said Dennis, "there would be panic in Kiev if the reading was 51." He thought people in Kiev were a little paranoid about contamination. "Just yesterday, some journalists called, saying they had heard there was a release of radioactive dust at the reactor," he said. "I told them I had just been down to the reactor, and there was no problem."