The Complete Guide to the Ultimate Superfood

Wayne Coates looks at the history and benefits of Chia, a seed full of omega-3 fatty acids and protein, once used by the Aztecs as a super food. Coates explores many of its recipes, such as chia-oat porridge, chia meatloaf and chia frittata. 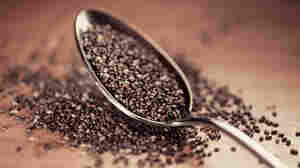 The chia plant is "a petite nutrient-packed powerhouse" writes Wayne Coates. There is evidence that the Aztecs used the seeds as early as 3,500 B.C. iStockphoto.com hide caption

July 15, 2012 • You might know them best in pet form, but the tiny little seeds have moved beyond their terra cotta figurines to become an increasingly popular health food. Wayne Coates writes about the benefits of chia seed in Chia: The Complete Guide to the Ultimate Superfood.

One day in 1984, I left my desk to go for a run. It was noon, and not only did I want some exercise, I wanted to get myself out of the office. That was the beginning of my new, healthier way of life.

Which, I suppose, is where chia comes in. Today, I regularly run 5Ks, 10Ks, halfmarathons, marathons, ultra-marathons, and even 100-mile runs. During the run itself, I dump about half the contents of a canister into my mouth, and then wash it down with a swig of water. Chia is extremely digestible and soothing to the stomach (not to mention joints!). It helps with stomach issues, slows digestion, increases overall hydration, helps maintain electrolyte balance, and improves stamina during these extended runs. Chia gives you an amazing amount of energy and increases endurance to unbelievable levels. In fact, whenever I talk to athletes who use chia, they always comment on gaining more energy in the later stages of their runs. They also mention an overall increase in energy, especially later in the day — a time when many people grow fatigued and sluggish, and rely on caffeine and sugar for quick and unhealthy pick-me-ups. Chia came into my own life by accident, really. I first came across this tiny seed in 1991 as an agricultural engineer. I was part of a team from The University of Arizona that visited South America in order to research alternative crops that might grow well in northwestern Argentina. Working directly with the growers, we planted a number of different seeds to determine which might perform the best. One of these was the ancient Aztec food, chia.

We began analyzing the seed to determine its various nutrient compounds, such as fiber. In the field, we saw that if it had rained, the seed would form a gel and stick together. This showed us that chia seed was great both as a hydrating compound and for retaining moisture. Researching the nutrient profile of the plant, we discovered that chia seed contains an incredible amount of omega-3 fatty acids — 4 grams per 2-tablespoon serving. In fact, chia has more omega-3 fatty acids and, in particular, alpha-linolenic fatty acid — the only essential omega-3 fatty acid — than any other known plant. This was a hugely important discovery because medical research shows that omega-3 fatty acids reduce inflammation in the body and help lower the risk of chronic diseases such as heart disease, cancer, and arthritis. Omega-3 fatty acids are important for everyday cognitive function (such as memory and performance), as well as creating stable moods and helping to regulate behaviors.

Many Americans show symptoms of omega-3 fatty acid deficiency, which include fatigue, poor memory, dry skin, heart problems, mood swings or depression, and poor circulation. We also discovered that chia boasts impressive amounts of antioxidants, including the phytonutrients quercetin, kaempferol, myricetin, chlorogenic acid, and caffeic acid. These antioxidants have significant value to human health, helping ward off everything from cancer to common viral illnesses. But what I found really exciting about these high levels of antioxidants is that they keep chia fresh and prevent rancidity.

Unlike highly perishable flax — which has an indigestible hard coating that keeps its nutrients fresh — chia's antioxidant profile allows it to remain shelf-stable for years. No hard shell means chia can be eaten and digested fully as-is. Because chia doesn't become rancid at room temperature, you can pulverize it as much as you like ahead of time, to use at your convenience. Also, chia doesn't have the slightly fishy taste that flax tends to develop shortly after grinding. These are three more reasons why my fellow researchers and I were so excited about chia.

But still the question remained, "What do we do with this seed?" Our first thought was skincare — the high omega-3 and antioxidant content make the oil from chia great for the skin. We also began feeding the seed to chickens and cows to create eggs and dairy products high in omega-3s. Beginning in the 1990s, producers began feeding animals flax, marine algae, and even fish derivatives to increase the omega-3 fatty acid content in eggs and dairy. Unfortunately, the enhanced products were left with an off-putting, fishy flavor that arose from the oxidation of the omega- 3 fatty acids in the flax. Our own research showed that chia did just what we wanted — increase the omega-3 content without altering the natural taste of eggs and milk. The amount of omega-3 fatty acids in the yolks of eggs laid by chia-fed hens increased by more than 1,600 percent, while the saturated fat content decreased by 30 percent. In a limited trial, in which chia was fed to milk cows, the milk had a 20 percent increase in omega-3 fatty acid content and a reduced saturated fatty acid content.

A growing body of research made it clear that chia is a complete food, not just protein or omega-3s. Nor is chia "just" composed of antioxidants, vitamins, minerals, amino acids, and fiber. Chia has so many qualities and health benefits, in fact, that I am in awe. I don't want to use the word "miracle" to describe this little seed, because it would make chia sound trendy and hyped-up, but the truth is, I don't have a better word for it. Chia truly is a miracle food and, as some have said, it's "the world's healthiest whole food." If there's one thing I have learned as a competitive ultra-distance runner it is this: you are only as effective as your health allows you to be. Chia keeps me healthy so that I can be at my best each day — no matter what kind of race I'm running, or what my exercise routine is. Chia helps me stay healthy for everyday tasks, too, whether I'm in my office writing scientific papers, traveling to oversee chia trials, in the lab doing research, or working on my chia website, www.azchia.com.

Two decades after my first encounter with chia, I am still researching the plant, the seed, and its many benefits. As time and money permits, I am currently looking into what else chia can do, studying its extracts, leaves, oils, flowers, and more.

My hope for chia is that more and more people will become familiar with it and give it a try. Chia really can help everyone—children and older adults, athletes and couch potatoes, people with acute or chronic health conditions, and even those who are currently healthy. In fact, I believe chia can improve the health of the world.