A few years back, journalist Sally Koslow was settling into an empty nest. Her two 20-something sons had been launched out of the house and into the wider world. Then, suddenly and unexpectedly, her sons landed back home and she found herself parenting two dependent adult children. She was startled to learn that her family was part of a much larger trend; according to the Pew Research Center, one-fifth of young adults ages 25 to 34 live in multigenerational households. In Slouching Toward Adulthood, Koslow draws on interviews with other parents and their grown children to assess the employment, monetary and social aspects of prolonged dependency — a phase that she calls "adultescence."

NPR stories about Slouching Toward Adulthood 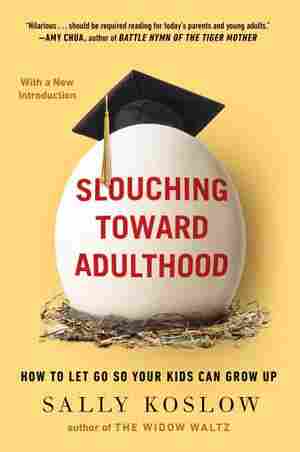 May 28, 2013 • In softcover fiction, Deborah Harkness sends a witch and a vampire back to Elizabethan England, and John Lanchester looks at London circa 2008. In nonfiction, Sally Koslow explores parenting adult children, and Andrew Blum reveals the infrastructure behind the Internet. 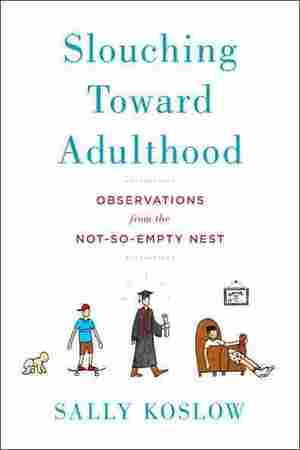 July 17, 2012 • Like millions of American parents, author Sally Koslow sent her children off to college, only to have them return home due to a bad economy and limited job options. In Slouching Toward Adulthood, Koslow shares her research and interviews on the phase she calls "adultescence." 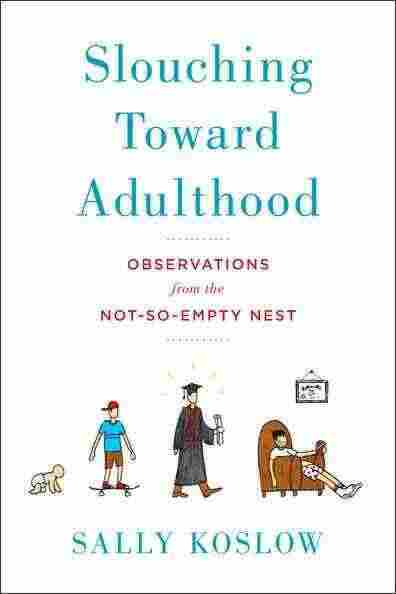 The clock struck noon. It was a weekday, bright and shiny. I gently knocked. "It's late — sweetie, shouldn't you be getting up?" A few minutes later, Sweetie staggered out of his childhood bedroom in boxers, stubble, and a Beastie Boys T-shirt cherished since tenth grade. Five months before, Jed had moved back home after a two-year post college spin working at a San Francisco record label. A few months earlier the plans for my son to open an East Coast branch of the company had fizzled — not that this development appeared to have cramped his style. A weekly unemployment check was financing more late-night eating and drinking than my husband and I had done in the last two decades.

"How's the job hunt?" I asked as he leisurely munched his bagel and paged through a magazine.

"What does that mean?"

This time I got the same look I received years before when I'd heard our son had his first girlfriend. "Who is she?" I'd asked, stoked with motherly glee.

"I release that information on a need-to-know basis," Jed answered, "and you have no need to know."

As Sweetie sat across from me at the breakfast table, I realized that You Can't Go Home Again wasn't on my son's English major syllabus.

All around us, sometimes in our own homes, we see young, well-educated Americans postponing full maturity and its attendant responsibilities. The beloved offspring to which I refer is most likely well over a decade into deodorant, partnered sex, and, depending on gender, tampons or even Rogaine. He or she is way past having earned the legal right to vote, defend our country, drive, maintain private medical records, enter into a contract, marry, smoke, go to jail, and — if he or she has hit twenty-five — rent a car or be elected to Congress. If a parent of such a person tweaks the hair and clothes, when her loving eyes gaze upon this child she may see some version of herself or her partner at the same age. This 2.0 reflection may look down on the reader, literally, from a greater height or have boobs that are a cup or two bigger — or perhaps it just seems that way, with her décolletage so often on display. There might be tattoos and tongue studs, but given Brazilians, landing strips, and manscaping, there's possibly not much pubic hair, although the parent prefers not to think about that.

Who are these people sandwiching a chunky stage between adolescence and adulthood, these individuals who resemble adults but aren't, exactly? The Margaret Mead who lurks within every parent can't help but notice curious discrepancies between the boy or girl under consideration and the grown-up we swear we were at the same age. We've come to think of "adults" as people who "settle down." Adults are financially independent and fiscally solvent, albeit usually with debt and a mortgage, usually tethered to a steady job or its reasonable facsimile. Trust fund kids never have seemed very adult, even — like Brooke Astor's greedy old baby — when they're eighty.

In the eyes of most real grown-ups, a random five-or ten-year slice of adulthood does not include going to school, taking a break, going to school again—possibly again and again—starting a job, starting another job, moving in with Mom and Dad, traveling here and traveling there, taking out loans, borrowing from the parents, and imbibing their grandparents' cocktails while accumulating credit card debt and purchasing cunning yet quickly replaced electronics.

Adults tend not to post their romantic status online, pulling back the curtains on their private life and publicizing intimate secrets. They don't fall in and out of love so many times they need Excel to track the relationships before they start to serially cohabitate, postponing marriage, kids, and getting fully established at jobs, much less careers. Adults may have sucked up the fizzy best seller Eat, Pray, Love, but they don't see Elizabeth Gilbert, its author, as their north star as they wing off for extended stays in Italy, India, and Indonesia. These young adventurers may also be unaware that Gilbert followed Eat, Pray, Love with Committed, where the author defends matrimony in pointillist detail. Adults feel that usually by the mid-thirties, they need to stop — and here I use the technical term — farting around.

The road separating today's adult from yesterday's starts to diverge when parents drop off Jenny or Josh at college. For most of today's parents this is uncharted territory and not only because of Adderall replacing LSD, the unisex dorms and bathrooms, and the comfortably out same-sex relationships and transgender students. After visiting well over a dozen campuses during high school — Hogwarts, if the parents could afford it — taking thousands of dollars' worth of Sisyphean test prep courses, and perhaps enjoying a jolly gap year in a faraway land, most American kids from solidly middle-class and upper-middleclass families enroll in an institution of higher learning. Every September, you can hear a transcontinental sigh as moms and dads among the privileged, anxious classes articulate immense relief, glad to be exorcised of their itchy need to deliver a droning loop about safety schools and U.S. News & World Report rankings, boring even themselves.

Mom and Dad accompany their newly minted first-years ("freshman" is 1969 pre-feminist Neanderthal argot and even "frosh" has landed in the linguistic compost heap) to a campus. There, they unload many, many boxes, perhaps ordered with the help of Bed, Bath & Beyond's "Shop for College" service, where millions of college students quiz themselves to determine their decorating style and scrutinize a list of "recommended" products so they can mesh purchases with their roommates. Eventually families depart, perhaps after attending a misty ceremony designed to encourage Mom and Dad to bid their chickadee good-bye. Parents may delude themselves into thinking they are leaving kids to learn to fight their own battles — college is a growth experience! — and bushwhack through administrative obfuscation in order to land a coveted spot in Kick-Ass Poets 101. With that, Mom and Dad take their first deep, cleansing breath in eighteen years, and generally celebrate by having sex.

Some students major in something solid, graduate, and hop onto the hamster wheel to high-powered jobs, destination weddings, early parenthood, and homes furnished from Design Within Reach, West Elm, and CB2. That's the sunny side of today's America.

The underbelly of family life is that in what seems like seven minutes, for many other students — perhaps the brother or sister of the oft-extolled young person pictured above — floats a concept. College may not be the promised land, no matter that the particular school he is attending was his first-choice "reach," salivated over for three years while the school's Web site home page served as his computer wallpaper. No biggie. He'll transfer or meander along on the five-or six-year plan, possibly with a junior year in Zimbabwe. Most boomer parents graduated after four years. If they hadn't, their parents — adults feared as much as respected — would have followed through on threats that scared the nonexistent sunscreen right off them. But it currently takes the average college student 4. 5 years to get a bachelor's degree, and six-year stays have become routine — on top of red-shirting boys to start kindergarten a year late to allow them time to earn their chops on the T-ball diamond and grab an edge. This adds two or more full years — and sometimes staggering expense — for boomer parents to have dependent kids. That is, if students graduate.