The Ultimate Hitchhiker's Guide to the Galaxy

The Ultimate Hitchhiker's Guide to the Galaxy

In this collection of novels, Arthur Dent is introduced to the galaxy at large when he is rescued by an alien friend seconds before Earth's destruction, and embarks on a series of amazing adventures, from the mattress swamps of Sqornshellous Zeta to the Restaurant at the End of the Universe.

NPR stories about The Ultimate Hitchhiker's Guide to the Galaxy

Excerpt: The Ultimate Hitchhiker's Guide To The Galaxy 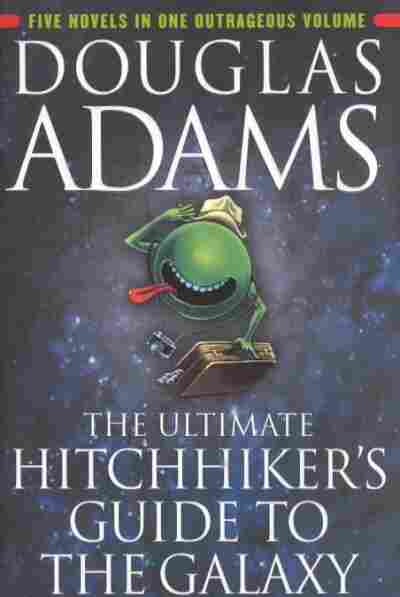 What Was He Like, Douglas Adams? by Neil Gaiman

He was tall, very tall. He had an air of cheerful diffidence. He combined a razor-sharp intellect and understanding of what he was doing with the puzzled look of someone who had backed into a profession that surprised him in a world that perplexed him. And he gave the impression that, all in all, he was rather enjoying it.

He was a genius, of course. It's a word that gets tossed around a lot these days, and it's used to mean pretty much anything. But Douglas was a genius, because he saw the world differently, and more importantly, he could communicate the world he saw. Also, once you'd seen it his way you could never go back.

Douglas Noel Adams was born in 1952 in Cambridge, England (shortly before the announcement of an even more influential DNA, deoxyribonucleic acid). He was a self-described "strange child" who did not learn to speak until he was four. He wanted to be a nuclear physicist ("I never made it because my arithmetic was so bad"), then went to Cambridge to study English, with ambitions that involved becoming part of the tradition of British writer/performers (of which the members of Monty Python's Flying Circus are the best-known example).

When he was eighteen, drunk in a field in Innsbruck, hitchhiking across Europe, he looked up at the sky filled with stars and thought, "Somebody ought to write the Hitchhiker's Guide to the Galaxy." Then he went to sleep and almost, but not quite, forgot all about it.

He left Cambridge in 1975 and went to London where his many writing and performing projects tended, in the main, not to happen. He worked with former Python Graham Chapman writing scripts and sketches for abortive projects (among them a show for Ringo Starr which contained the germ of Starship Titanic) and with writer-producer John Lloyd (they pitched a series called Snow Seven and the White Dwarfs, a comedy about two astronomers in "an observatory on Mt. Everest" — "The idea for that was minimum casting, minimum set, and we'd just try to sell the series on cheapness").

He liked science fiction, although he was never a fan. He supported himself through this period with a variety of odd jobs: he was, for example, a hired bodyguard for an oil-rich Arabian family, a job that entailed wearing a suit and sitting in hotel corridors through the night listening to the ding of passing elevators.

In 1977 BBC radio producer (and well-known mystery author) Simon Brett commissioned him to write a science fiction comedy for BBC Radio Four. Douglas originally imagined a series of six half-hour comedies called The Ends of the Earth — funny stories which at the end of each, the world would end. In the first episode, for example, the Earth would be destroyed to make way for a cosmic freeway.

But, Douglas soon realized, if you are going to destroy the Earth, you need someone to whom it matters. Someone like a reporter for, yes, the Hitchchiker's Guide to the Galaxy. And someone else ... a man who was called Alaric B in Douglas's original proposal. At the last moment Douglas crossed out Alaric B and wrote above it Arthur Dent. A normal name for a normal man.

For those people listening to BBC Radio 4 in 1978 the show came as a revelation. It was funny — genuinely witty, surreal, and smart. The series was produced by Geoffrey Perkins, and the last two episodes of the first series were co-written with John Lloyd.

(I was a kid who discovered the series — accidentally, as most listeners did — with the second episode. I sat in the car in the driveway, getting cold, listening to Vogon poetry, and then the ideal radio line "Ford, you're turning into an infinite number of penguins," and I was happy; perfectly, unutterably happy.)

By now, Douglas had a real job. He was the script editor for the long-running BBC SF series Doctor Who, in the Tom Baker days.

Pan Books approached him about doing a book based on the radio series, and Douglas got the manuscript for The Hitchhiker's Guide to the Galaxy in to his editors at Pan slightly late (according to legend they telephoned him and asked, rather desperately, where he was in the book, and how much more he had to go. He told them. "Well," said his editor, making the best of a bad job, "just finish the page you're on and we'll send a motorbike around to pick it up in half an hour"). The book, a paperback original, became a surprise bestseller, as did, less surprisingly, its four sequels. It spawned a bestselling text-based computer game.

The Hitchhiker's Guide to the Galaxy sequence used the tropes of science fiction to talk about the things that concerned Douglas, the world he observed, his thoughts on Life, the Universe, and Everything. As we moved into a world where people really did think that digital watches were a pretty neat thing, the landscape had become science fiction and Douglas, with a relentless curiosity about matters scientific, an instinct for explanation, and a laser-sharp sense of where the joke was, was in a perfect position to comment upon, to explain, and to describe that landscape.

I read a lengthy newspaper article recently demonstrating that Hitchhiker's was in fact a lengthy tribute to Lewis Carroll (something that would have come as a surprise to Douglas, who had disliked the little of Alice in Wonderland he read). Actually, the literary tradition that Douglas was part of was, at least initially, the tradition of English Humor Writing that gave us P. G. Wodehouse (whom Douglas often cited as an influence, although most people tended to miss it because Wodehouse didn't write about spaceships).

Douglas Adams did not enjoy writing, and he enjoyed it less as time went on. He was a bestselling, acclaimed, and much-loved novelist who had not set out to be a novelist, and who took little joy in the process of crafting novels. He loved talking to audiences. He liked writing screenplays. He liked being at the cutting edge of technology and inventing and explaining with an enthusiasm that was uniquely his own. Douglas's ability to miss deadlines became legendary. ("I love deadlines," he said once. "I love the whooshing sound they make as they go by.")

He died in May 2001 — too young. His death surprised us all, and left a huge, Douglas Adams-sized hole in the world. We had lost both the man (tall, affable, smiling gently at a world that baffled and delighted him) and the mind.

He left behind a number of novels, as often-imitated as they are, ultimately, inimitable. He left behind characters as delightful as Marvin the Paranoid Android, Zaphod Beeblebrox and Slartibartfast. He left sentences that will make you laugh with delight as they rewire the back of your head.

And he made it look so easy.

(Long before Neil Gaiman was the bestselling author of novels like American Gods and Neverwhere, or graphic novels like The Sandman sequence, he wrote a book called Don't Panic, a history of Douglas Adams and the Hitchhiker's Guide to the Galaxy.)