Lord of the Flies

Lord of the Flies

The classic study of human nature depicts the degeneration of a group of schoolboys marooned on a desert island. Ralph, Piggy, Simon and their fellow castaways attempt to develop their own society — and fail disastrously.

NPR stories about Lord of the Flies

Excerpt: Lord Of The Flies 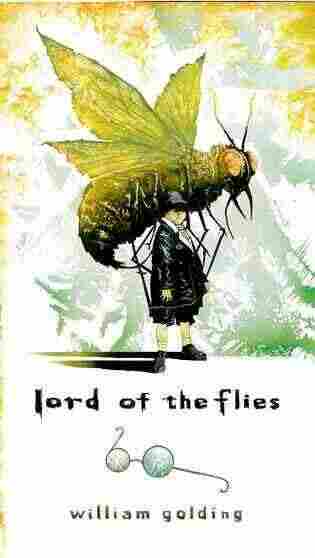 THE SOUND OF THE SHELL

THE BOY WITH FAIR HAIR LOWERED HIMSELF down the last few feet of rock and began to pick his way toward the lagoon. Though he had taken off his school sweater and trailed it now from one hand, his grey shirt stuck to him and his hair was plastered to his forehead. All round him the long scar smashed into the jungle was a bath of heat. He was clambering heavily among the creepers and broken trunks when a bird, a vision of red and yellow, flashed upwards with a witchlike cry; and this cry was echoed by another.

The undergrowth at the side of the scar was shaken and a multitude of raindrops fell pattering.

The fair boy stopped and jerked his stockings with an automatic gesture that made the jungle seem for a moment like the Home Counties.

"I can't hardly move with all these creeper things."

The owner of the voice came backing out of the undergrowth so that twigs scratched on a greasy wind-breaker. The naked crooks of his knees were plump, caught and scratched by thorns. He bent down, removed the thorns carefully, and turned around. He was shorter than the fair boy and very fat. He came forward, searching out safe lodgments for his feet, and then looked up through thick spectacles.

"Where's the man with the megaphone?"

The fair boy shook his head.

"This is an island. At least I think it's an island. That's a reef out in the sea. Perhaps there aren't any grownups anywhere."

"There was that pilot. But he wasn't in the passenger cabin, he was up in front."

The fair boy was peering at the reef through screwed-up eyes.

"All them other kids," the fat boy went on. "Some of them must have got out. They must have, mustn't they?"

The fair boy began to pick his way as casually as possible toward the water. He tried to be offhand and not too obviously uninterested, but the fat boy hurried after him.

"Aren't there any grownups at all?"

The fair boy said this solemnly; but then the delight of a realized ambition overcame him. In the middle of the scar he stood on his head and grinned at the reversed fat boy.

The fat boy thought for a moment.

The fair boy allowed his feet to come down and sat on the steamy earth.

"He must have flown off after he dropped us. He couldn't land here. Not in a place with wheels."

The fat boy shook his head.

"When we was coming down I looked through one of them windows. I saw the other part of the plane. There were flames coming out of it."

He looked up and down the scar.

"And this is what the cabin done."

The fair boy reached out and touched the jagged end of a trunk. For a moment he looked interested.

"That storm dragged it out to sea. It wasn't half dangerous with all them tree trunks falling. There must have been some kids still in it."

He hesitated for a moment, then spoke again.

The fat boy waited to be asked his name in turn but this proffer of acquaintance was not made; the fair boy called Ralph smiled vaguely, stood up, and began to make his way once more toward the lagoon. The fat boy hung steadily at his shoulder.

"I expect there's a lot more of us scattered about. You haven't seen any others, have you?"

Ralph shook his head and increased his speed. Then he tripped over a branch and came down with a crash.

The fat boy stood by him, breathing hard.

"My auntie told me not to run," he explained, "on account of my asthma."

"That's right. Can't catch my breath. I was the only boy in our school what had asthma," said the fat boy with a touch of pride. "And I've been wearing specs since I was three."

He took off his glasses and held them out to Ralph, blinking and smiling, and then started to wipe them against his grubby wind-breaker. An expression of pain and inward concentration altered the pale contours of his face. He smeared the sweat from his cheeks and quickly adjusted the spectacles on his nose.

He glanced round the scar.

He put on his glasses, waded away from Ralph, and crouched down among the tangled foliage.

Ralph disentangled himself cautiously and stole away through the branches. In a few seconds the fat boy's grunts were behind him and he was hurrying toward the screen that still lay between him and the lagoon. He climbed over a broken trunk and was out of the jungle.

The shore was fledged with palm trees. These stood or leaned or reclined against the light and their green feathers were a hundred feet up in the air. The ground beneath them was a bank covered with coarse grass, torn everywhere by the upheavals of fallen trees, scattered with decaying coconuts and palm saplings. Behind this was the darkness of the forest proper and the opens pace of the scar. Ralph stood, one hand against a grey trunk, and screwed up his eyes against the shimmering water. Out there, perhaps a mile away, the white surf flinked on a coral reef, and beyond that the open sea was dark blue. Within the irregular arcof coral the lagoon was still as a mountain lake — blue of all shades and shadowy green and purple. The beach between the palm terrace and the water was a thin stick, endless apparently, for to Ralph's left the perspectives of palm and beach and water drew to a point at infinity; and always, almost visible, was the heat.