The Sisterhood of the Traveling Pants

The Sisterhood of the Traveling Pants

Title
The Sisterhood of the Traveling Pants
Author
Ann Brashares

During their first summer break spent apart, longtime friends Lena, Tibby, Carmen and Bridget each embark on adventures that they share with each other through a pair of jeans that they have decided will be worn by all, and so will absorb all of their stories.

NPR stories about The Sisterhood of the Traveling Pants

Excerpt: The Sisterhood Of The Traveling Pants 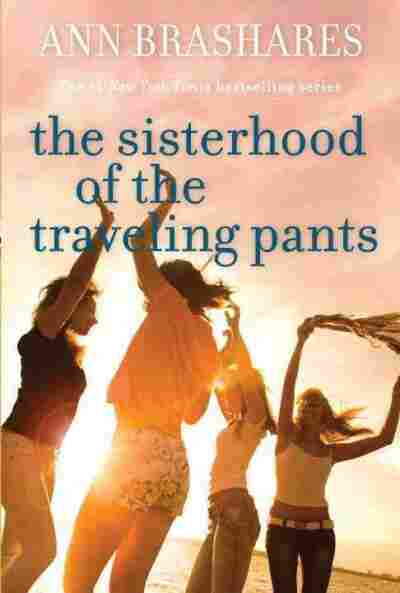 "Can you close that suitcase?" Tibby asked Carmen.

Carmen glanced at the structured canvas bag splayed wantonly in the middle of her bed. Suddenly she wished she had all-new underwear. Her best satin pair was sprouting tiny ropes of elastic from the waistband.

"It's making me sick," Lena said. "I haven't started packing. My flight's at seven."

Carmen flopped the top of the suitcase down on the carpeted floor. She was working on removing navy-blue polish from her toenails.

"Lena, could you not say that word anymore?" Tibby asked, wilting a little on the edge of Carmen's bed. "It's making me sick."

Tibby considered. "All of them."

"Oh, Tibs," Carmen said, grabbing Tibby's foot from where she sat. "It's gonna be okay."

Tibby took her foot back. "It's gonna be okay for you. You're going away. You're going to eat barbecue all the time and light firecrackers and everything.

Tibby had nonsensical ideas about what people did in South Carolina, but Carmen knew not to argue with her.

Lena let out a little hum of sympathy.

Tibby turned on her. "Don't make that pity noise, Lena."

Lena cleared her throat. "I didn't," she said quickly, even though she had.

"No," Tibby shot back. She held up hands crossed at the wrist in a hex sign to ward off Bridget. "No pep talks. No fair. I only let you do pep talks when you need to feel better."

"I wasn't doing a pep talk," Bridget said defensively, even though she was.

Carmen made her wise eyebrows. "Hey, Tibs? Maybe if you're nasty enough, you won't miss us and we won't miss you."

"Carma!" Tibby shouted, getting to her feet and thrusting a stiff arm at Carmen. "I see through that! You're doing psychological analysis on me. No! No!"

Carmen's cheeks flushed. "I am not," she said quietly.

The three of them sat, scolded into silence.

"God, Tibby, what is anybody allowed to say?" Bridget asked.

Tibby thought about it. "You can say ..." She glanced around the room. She had tears welling in her eyes, but Carmen knew she didn't want them to show. "You can say ..." Her eyes lighted on the pair of pants folded on the top of a stack of clothes on Carmen's dresser. "You can say, 'Hey, Tibby, want those pants?"'

Carmen looked baffled. She capped the polish remover, walked over to her dresser, and held up the pants. Tibby usually liked clothes that were ugly or challenging. These were just jeans. "You mean these?" They were creased in three places from inattention.

"You really want them?" Carmen didn't feel like mentioning that she was planning to throw them away. Bigger points if they mattered.

Tibby was demanding a little display of unconditional love. Then again, it was her right. Three of them were flying off on big adventures the next day, and Tibby was launching her career at Wallman's in scenic Bethesda for five cents over minimum wage.

Tibby absently hugged the pants, slightly deflated at getting her way so fast.

Lena studied them. "Are those the pants you got at the secondhand place next to Yes!?"

Tibby unfolded them. "They're great."

The pants suddenly looked different to Carmen. Now that somebody cared about them, they looked a little nicer.

"Don't you think you should try them on?" Lena asked practically. "If they fit Carmen, they aren't going to fit you."

Carmen and Tibby both glared at Lena, not sure who should take more offense.

"What?" Bridget said, hopping to Lena's aid. "You guys have completely different builds. Is that not obvious?"

Tibby pulled off her dilapidated brown cargo pants, revealing lavender cotton underwear. She turned her back to her friends for the sake of drama as she pulled on the pants. She zipped, buttoned, and turned around. "Ta-da!"

"Tibs, you're such a babe," Bridget proclaimed.

Tibby tried not to let her smile get loose. She went over to the mirror and turned to the side. "You think they're good?"

"Are those really my pants?" Carmen asked.

Tibby had narrow hips and long legs for her small frame. The pants fell below her waist, hugging her hips intimately. They revealed a white strip of flat stomach, a nice inny belly button.

Tibby didn't quarrel. She knew as well as anyone that she looked skinny and shapeless in the oversized pants she usually wore.

The pants bagged a little at her feet, but that worked for Tibby.

Suddenly Tibby looked unsure. "I don't know. Maybe somebody else should try them." Slowly she unbuttoned and unzipped.

"Tibby, you are crazy," Carmen said. "Those pants are in love with you. They want you for your body and your mind." She couldn't help seeing the pants in a completely new way.

Tibby threw them at Lena. "Here. You go."

"Why? They're meant to be yours, " Lena argued.

Carmen could see Lena glancing at the pants with a certain amount of interest. "Why not? Lena, try 'em."

Lena looked at the pants warily. She shed her own khakis and pulled them on. She made sure they were buttoned and sitting straight on her hips before she glanced in the mirror.

They were used to Lena, but Carmen knew that to the rest of the world she was fairly stunning. She had Mediterranean skin that tanned well, straight, shiny dark hair, and wide eyes roughly the color of celery. Her face was so lovely, so delicately structured, it kind of gave Carmen a stomachache. Carmen once confessed her worry to Tibby that some movie director was going to spot Lena and take her away, and Tibby admitted she had worried the exact same thing. Particularly beautiful people were like particularly funny-looking people, though. Once you knew them you mostly forgot about it.

The pants clung to Lena's waist and followed the line of her hips. They held close to the shape of her thighs and fell exactly to the tops of her feet. When she took two steps forward, they appeared to hug each of her muscles as they shifted and moved. Carmen gazed in wonder at how different was their effect from Lena's bland uniform of J. Crew khakis.

Lena snatched another peek at the mirror. She always held herself in a slightly awkward way, with her neck pushed forward, when she looked in a mirror. She winced. "I think maybe they're too tight," she said.

"Are you joking?" Tibby barked. "They are beautiful. They look a million times better than those lame-o pants you usually wear."

Lena turned to Tibby. "Was that a compliment somewhere in there?"

"Seriously, you have to have them," Tibby said. "They're like ... transforming."

Lena fiddled with the waistband. She was never comfortable talking about the way she looked.

Lena slid the pants off her hips. "Bee has to try them."

"You do," Lena confirmed.

"She's too tall for them," Tibby said.

"What, are you scared of them?" Carmen taunted. Stupid dares like that always worked on Bridget.

Bridget grabbed them from Lena. She took off her dark indigo jeans, kicked them into a pile on the floor, and pulled on the pants. At first she tried to pull the pants way up on her waist, so they would be too short, but as soon as she let go, the pants settled gracefully on her hips.

Bridget turned around to look at her backside. "What?"

"They're not short; they're perfect," Lena said.

Bridget was tall, with broad shoulders and long legs and big hands. It was easy to think she was a big person, but she was surprisingly narrow through her hips and waist.

"She's right," Carmen said. "The pants fit better than your usual ones."

Bridget switched her butt in front of the mirror. "These do look good," she said. "Wow. I think I may love them."

"You've got a great little butt," Carmen pointed out.

Tibby laughed. "That from the queen of butts." She got a troublemaking look in her eyes. "Hey. You know how we find out if these pants are truly magical?"

Tibby jiggled her foot in the air. "You try them on. I know they're yours and all, but I'm just saying, scientifically speaking, that it is impossible for these pants to fit you too."

Carmen chewed the inside of her cheek. "Are you casting aspersions on my butt?"

"Oh, Carma. You know I envy it. I just don't think these pants are going to fit over it," Tibby explained reasonably.

Suddenly Carmen was afraid that the pants that hugged each of her friends' bodies with loving grace would not fit over her upper thighs. She wasn't really chubby, but she had inherited her backside directly from the Puerto Rican half of the family. It was very nicely shaped, and most days she felt proud of it, but here with these pants and her three little-assed friends, she didn't feel like standing out like the big fatso.

"Nah. I don't want them," Carmen said, standing up and getting ready to try to change the subject. Six eyes remained fixed on the pants.

She saw too much anticipation on her friends' faces to drop it without a fight. "Fine. Don't expect them to fit or anything. I'm sure they won't."

"Carmen, they're your pants," Bridget pointed out.

"Yeah, smarty, but I never tried them on before." Carmen said it with enough force to ward off further questions. She pulled off her black flares and pulled on the jeans. They didn't stop at her thighs. They went right up over her hips without complaint. She fastened them. "So?" She wasn't ready to venture a look in the mirror yet.

"What?" Carmen felt cursed. "What? Are they that bad? She found the courage to meet Tibby's eye. "What?"

Carmen winced and looked away. "I'll just take them off, and we'll pretend this never happened," she said, her cheeks flushing.

Bridget found words. "Carmen, that's not it at all! Look at yourself! You are a thing of beauty. You are a vision. You are a supermodel."

Carmen put her hand on her hip and made a sour face. "That I doubt."

"Seriously, look at yourself," Lena ordered. "These are magic pants."

Carmen looked at herself. First from far away, then from up close. From the front and then the back.

The CD they'd been listening to ended, but nobody seemed to notice. The phone was ringing distantly, but nobody got up to get it. The normally busy street was silent.

Carmen finally let out her breath. "These are magic pants."