In the Old Kingdom, magic is real and the dead walk — and sometimes, they walk right across the magical Wall and into the New Kingdom. The series follows skilled necromancer Sabriel and her companions as they fight to send the dead back into the realm of Death.

NPR stories about The Abhorsen Trilogy 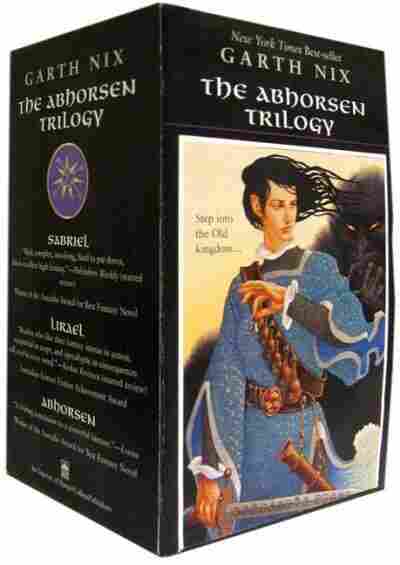 This fog was different from its far-southern cousin. It was not white but the dark grey of a storm cloud, and it was completely unnatural. This fog had been spun from air and Free Magic and was born on a hilltop far from any water. It survived and spread despite the heat of a late-spring afternoon, which should have burned it into nothing.

Ignoring sun and light breezes, the fog spread from the hill and rolled south and east, thin tendrils creeping out in advance of the main body. Half a league on from the hill, one of these tendrils separated into a cloud that rose high in the air and crossed the mighty river Ratterlin. Once across, it sank to sit like a toad on the eastern bank, and new fog begun to puff out of it.

Soon the two arms of fog shrouded both western and eastern shores of the Ratterlin, though the sun still shone on the river in between.

Both river and fog sped at their very different paces towards the Long Cliffs. The river dashed along, getting faster and faster as it headed to the great waterfall, where it would plunge down more than a thousand feet. The fog was slow and threatening. It thickened and rose higher as it rolled on.

A few yards before it reached the Long Cliffs, the fog stopped, though it still grew thicker and rose higher, threatening the island that sat in the middle of the river and on the edge of the waterfall. An island with high white walls that enclosed a house and gardens.

The fog did not spread across the river, nor lean in too far as it rose. There were unseen defenses that held it back, that kept the sun shining on the white walls, the gardens, and the red-tiled house. The fog was a weapon, but it was only the first move in a battle, only the beginning of a siege. The battle lines were drawn and the House invested.

For the whole river-circled isle was Abhorsen's House. Home to the Abhorsen, whose birthright and charge was to maintain the borders of Life and Death. The Abhorsen, who used necromantic bells and Free Magic, but who was neither necromancer nor Free Magic sorcerer. The Abhorsen, who sent any Dead who trespassed in Life back to whence they came.

The creator of the fog knew that the Abhorsen was not actually in the House. The Abhorsen and her husband, the King, had been lured across the Wall and would presumably be dealt with there. That was part of her Master's plan, long since laid but only recently begun in earnest.