In a remote corner of Terry Pratchett's Discworld, a young witch-to-be named Tiffany Aching teams up with the Wee Free Men, a clan of rowdy, 6-inch-high blue men, to rescue her baby brother and ward off a sinister invasion from Fairyland. 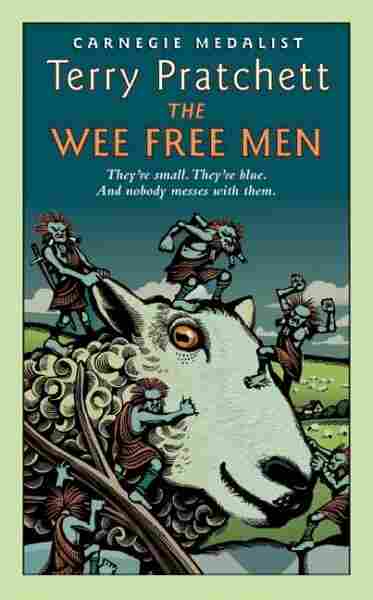 Some things start before other things.

It was a summer shower but didn't appear to know it, and it was pouring rain as fast as a winter storm.

Miss Perspicacia Tick sat in what little shelter a raggedy hedge could give her and explored the universe. She didn't notice the rain. Witches dried out quickly.

The exploring of the universe was being done with a couple of twigs tied together with string, a stone with a hole in it, an egg, one of Miss Tick's stockings (which also had a hole in it), a pin, a piece of paper, and a tiny stub of pencil. Unlike wizards, witches learn to make do with a little.

The items had been tied and twisted together to make a ... device. It moved oddly when she prodded it. One of the sticks seemed to pass right through the egg, for example, and came out the other side without leaving a mark.

"Yes," she said quietly, as rain poured off the rim of her hat. "There it is. A definite ripple in the walls of the world. Very worrying. There's probably another world making contact. That's never good. I ought to go there. But ... according to my left elbow, there's a witch there already."

"She'll sort it out, then," said a small and, for now, mysterious voice from somewhere near her feet.

"No, it can't be right. That's chalk country over that way," said Miss Tick. "You can't grow a good witch on chalk. The stuff's barely harder than clay. You need good hard rock to grow a witch, believe me." Miss Tick shook her head, sending raindrops flying. "But my elbows are generally very reliable." "Why talk about it? Let's go and see," said the voice. "We're not doing very well around here, are we?"

That was true. The lowlands weren't good to witches. Miss Tick was making pennies by doing bits of medicine and misfortune - telling, and slept in barns most nights. She'd twice been thrown into ponds.

She pulled a cracked saucer out of her pocket and tipped into it the rainwater that had collected on her hat. Then she took a bottle of ink out of another pocket and poured in just enough to turn the water black.

She cupped it in her hands to keep the raindrops out and listened to her eyes.

Tiffany Aching was lying on her stomach by the river, tickling trout. She liked to hear them laugh. It came up in bubbles.

A little way away, where the riverbank became a sort of pebble beach, her brother, Wentworth, was messing around with a stick, and almost certainly making himself sticky.

Anything could make Wentworth sticky. Washed and dried and left in the middle of a clean floor for five minutes, Wentworth would be sticky. It didn't seem to come from anywhere. He just got sticky. But he was an easy child to mind, provided you stopped him from eating frogs.

There was a small part of Tiffany's brain that wasn't too certain about the name Tiffany. She was nine years old and felt that Tiffany was going to be a hard name to live up to. Besides, she'd decided only last week that she wanted to be a witch when she grew up, and she was certain Tiffany just wouldn't work. People would laugh.

Another and larger part of Tiffany's brain was thinking of the word susurrus. It was a word that not many people have thought about, ever. As her fingers rubbed the trout under its chin, she rolled the word round and round in her head.

Susurrus ... according to her grandmother's dictionary, it meant "a low soft sound, as of whispering or muttering." Tiffany liked the taste of the word. It made her think of mysterious people in long cloaks whispering important secrets behind a door: susurruss - susurrusss ...

She'd read the dictionary all the way through. No one told her you weren't supposed to.

As she thought this, she realized that the happy trout had swum away. But something else was in the water, only a few inches from her face.

It was a round basket, no bigger than half a coconut shell, coated with something to block up the holes and make it float. A little man, only six inches high, was standing up in it. He had a mass of untidy red hair into which a few feathers, beads, and bits of cloth had been woven. He had a red beard, which was pretty much as bad as the hair. The rest of him that wasn't covered with blue tattoos was covered with a tiny kilt. And he was waving a fist at her and shouting:

With that he pulled at a piece of string that was hanging over the side of his boat, and a second red-headed man surfaced, gulping air.

"Nae time for fishin'!" said the first man, hauling him aboard. "The green heid's coming!"

"Crivens!" said the swimmer, water pouring off him. "Let's offski!"

And with that he grabbed one very small oar and, with rapid back and forth movements, made the basket speed away.

"Excuse me!" Tiffany shouted. "Are you fairies?"

But there was no answer. The little round boat had disappeared in the reeds.

Then, to her dark delight, there was a susurrus. There was no wind, but the leaves on the alder bushes by the riverbank began to shake and rustle. So did the reeds. They didn't bend, they just blurred. Everything blurred, as if something had picked up the world and was shaking it. The air fizzed. People whispered behind closed doors....