In the Graceling realms, rare people are Graced with a special skill — cooking, fighting, singing, building, lying — and all the Graced are marked with eyes of two different colors. Katsa, niece of the tyrannical king, is graced with fighting — or so she thinks. 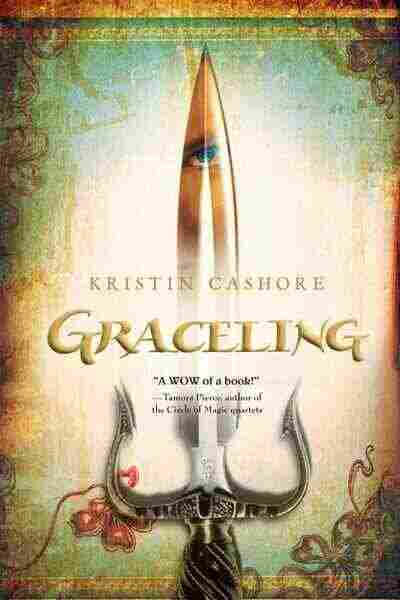 IN THESE DUNGEONS the darkness was complete, but Katsa had a map in her mind. One that had so far proven correct, as Oll's maps tended to do. Katsa ran her hand along the cold walls and counted doors and passageways as she went. Turning when it was time to turn; stopping finally before an opening that should contain a stairway leading down. She crouched and felt forward with her hands. There was a stone step, damp and slippery with moss, and another one below it. This was Oll's staircase, then. She only hoped that when he and Giddon followed her with their torches, they would see the moss slime, tread carefully, and not waken the dead by clattering headlong down the steps.

Katsa slunk down the stairway. One left turn and two right turns. She began to hear voices as she entered a corridor where the darkness flickered orange with the light of a torch set in the wall. Across from the torch was another corridor where, according to Oll, anywhere from two to ten guards should be standing watch before a certain cell at the passageway's end.

These guards were Katsa's mission. It was for them that she had been sent first.

Katsa crept toward the light and the sound of laughter. She could stop and listen, to get a better sense of how many she would face, but there was no time. She pulled her hood down low and swung around the corner.

She almost tripped over her first four victims, who were sitting on the floor across from each other, their backs against the wall, legs splayed, the air stinking with whatever strong drink they'd brought down here to pass the time of their watch. Katsa kicked and struck at temples and necks, and the four men lay slumped together on the floor before amazement had even registered in their eyes.

There was only one more guard, sitting before the cell bars at the end of the corridor. He scrambled to his feet and slid his sword from its sheath. Katsa walked toward him, certain that the torch at her back hid her face, and particularly her eyes, from his sight. She measured his size, the way he moved, the steadiness of the arm that held the sword toward her.

"Stop there. It's clear enough what you are." His voice was even. He was brave, this one. He cut the air with his sword, in warning. "You don't frighten me."

He lunged toward her. She ducked under his blade and whirled her foot out, clipping his temple. He dropped to the ground.

She stepped over him and ran to the bars, squinting into the darkness of the cell. A shape huddled against the back wall, a person too tired or too cold to care about the fighting going on. Arms wrapped around legs, and head tucked between knees. He was shivering?she could hear his breath. She shifted, and the light glanced over his crouched form. His hair was white and cut close to his head. She saw the glimmer of gold in his ear. Oll's maps had served them well, for this man was a Lienid. He was the one they were looking for.

She pulled on the door latch. Locked. Well, that was no surprise, and it wasn't her problem. She whistled once, low, like an owl. She stretched the brave guard flat on his back and dropped one of her pills into his mouth. She ran up the corridor, turned the four unfortunates on their backs beside each other, and dropped a pill into each mouth. Just as she was beginning to wonder if Oll and Giddon had lost themselves in the dungeons, they appeared around the corner and slipped past her.

Their torchlight splashed the walls as they approached the cell. The Lienid man moaned and drew his arms in closer. Katsa caught a glimpse of his torn, stained clothing. She heard Giddon's ring of lock picks clink against itself. She would have liked to have waited to see that they opened the door, but she was needed elsewhere. She tucked her packet of pills into her sleeve and ran.

Most of the guards gave her no trouble. If she could sneak up on them, or if they were crowded in small groups, they never knew what hit them. The castle guard was a bit more complicated, because five guards defended his office. She swirled through the lot of them, kicking and kneeing and hitting, and the castle guard jumped up from his guardhouse desk, burst through the door, and ran into the fray.

"I know a Graceling when I see one." He jabbed with his sword, and she rolled out of the way. "Let me see the colors of your eyes, boy. I'll cut them out. Don't think I won't."

It gave her some pleasure to knock him on the head with the hilt of her knife. She grabbed his hair, dragged him onto his back, and dropped a pill onto his tongue. They would all say, when they woke to their headaches and their shame, that the culprit had been a Graceling boy, Graced with fighting, acting alone. They would assume she was a boy, because in her plain trousers and hood she looked like one, and because when people were attacked it never occurred to anyone that it might have been a girl. And none of them had caught a glimpse of Oll or Giddon: She had seen to that.

No one would think of her. Whatever the Graceling Lady Katsa might be, she was not a criminal who lurked around dark courtyards at midnight, disguised. And besides, she was supposed to be en route east. Her uncle Randa, King of the Middluns, had seen her off just that morning, the whole city watching, with Captain Oll and Giddon, Randa's underlord, escorting her. Only a day of very hard riding in the wrong direction could have brought her south to King Murgon's court.

Katsa ran through the courtyard, past flower beds, fountains, and marble statues of Murgon. It was quite a pleasant courtyard, really, for such an unpleasant king; it smelled of grass and rich soil, and the sweetness of dew-dripped flowers. She raced through Murgon's apple orchard, a trail of drugged guards stretching out behind her. Drugged, not dead: an important distinction. Oll and Giddon, and most of the rest of the secret Council, had wanted her to kill them. But at the meeting to plan this mission, she'd argued that killing them would gain no time.

"What if they wake?" Giddon had said.

Prince Raffin had been offended. "You doubt my medicine. They won't wake."

"It would be faster to kill them," Giddon had said, his brown eyes insistent. Heads in the dark room had nodded.

"I can do it in the time allotted," Katsa had said, and when Giddon had started to protest, she'd held up her hand. "Enough. I won't kill them. If you want them killed, you can send someone else."

Oll had smiled and clapped the young lord on the back. "Just think, Lord Giddon, it'll make it more fun for us. The perfect robbery, past all of Murgon's guards, and nobody hurt? It's a good game."

The room had erupted with laughter, but Katsa hadn't even cracked a smile. She wouldn't kill, not if she didn't have to. A killing couldn't be undone, and she'd killed enough. Mostly for her uncle. King Randa thought her useful. When border ruffians were stirring up trouble, why send an army if you could send a single representative? It was much more economical. But she'd killed for the Council, too, when it couldn't be avoided. This time it could be avoided.

At the far end of the orchard she came upon a guard who was old, as old, perhaps, as the Lienid. He stood in a grove of yearling trees, leaning on his sword, his back round and bent. She snuck up behind him and paused. A tremor shook the hands that rested on the hilt of his blade.

She didn't think much of a king who didn't retire his guards in comfort when they'd gotten too old to hold a sword steady.

But if she left him, he would find the others she'd felled and raise the alarm. She struck him once, hard, on the back of the head, and he slumped and let out a puff of air. She caught him and lowered him to the ground, as gently as she could, and then dropped a pill into his mouth. She took a moment to run her fingers along the lump forming on his skull. She hoped his head was strong.

She had killed once by accident, a memory she held close to her consciousness. It was how her Grace had announced its nature, a decade ago. She'd been a child, barely eight years old. A man who was some sort of distant cousin had visited the court. She hadn't liked him?his heavy perfume, the way he leered at the girls who served him, the way his leer followed them around the room, the way he touched them when he thought no one was watching. When he'd started to pay Katsa some attention, she had grown wary. "Such a pretty little one," he'd said. "Graceling eyes can be so very unattractive. But you, lucky girl, look better for it. What is your Grace, my sweetness? Storytelling? Mind reading? I know. You're a dancer."

Katsa hadn't known what her Grace was. Some Graces took longer than others to surface. But even if she had known, she wouldn't have cared to discuss it with this cousin. She'd scowled at the man and turned away. But then his hand had slid toward her leg, and her hand had flown out and smashed him in the face. So hard and so fast that she'd pushed the bones of his nose into his brain.

Ladies in the court had screamed; one had fainted. When they'd lifted him from the pool of blood on the floor and he'd turned out to be dead, the court had grown silent, backed away. Frightened eyes?not just those of the ladies now, but those of the soldiers, the sworded underlords?all directed at her. It was fine to eat the meals of the king's chef, who was Graced with cooking, or send their horses to the king's Graced horse doctor. But a girl Graced with killing? This one was not safe.