A Great and Terrible Beauty

A Great and Terrible Beauty

After the suspicious death of her mother in 1895, 16-year-old Gemma returns to England, after many years in India, to attend a finishing school. There, she becomes aware of her magical powers and ability to see into the spirit world. But what will she find in that strange world?

NPR stories about A Great and Terrible Beauty

Excerpt: A Great And Terrible Beauty 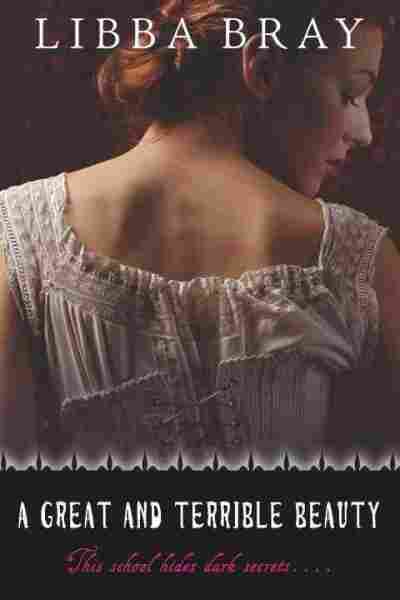 "Please tell me that's not going to be part of my birthday dinner this
evening."

I am staring into the hissing face of a cobra. A surprisingly pink tongue slithers in and out of a cruel mouth while an Indian man whose eyes are the blue of blindness inclines his head toward my mother and explains in Hindi that cobras make very good eating.

My mother reaches out a white-gloved finger to stroke the snake's back. "What do you think, Gemma? Now that you're sixteen, will you be dining on cobra?"

The slithery thing makes me shudder. "I think not, thank you."

The old, blind Indian man smiles toothlessly and brings the cobra closer. It's enough to send me reeling back where I bump into a wooden stand filled with little statues of Indian deities. One of the statues, a woman who is all arms with a face bent on terror, falls to the ground. Kali, the destroyer. Lately, Mother has accused me of keeping her as my unofficial patron saint. Lately, Mother and I haven't been getting on very well. She claims it's because I've reached an impossible age. I state emphatically to anyone who will listen that it's all because she refuses to take me to London.

"I hear in London, you don't have to defang your meals first," I say. We're moving past the cobra man and into the throng of people crowding every inch of Bombay's frenzied marketplace. Mother doesn't answer but waves away an organ-grinder and his monkey. It's unbearably hot. Beneath my cotton dress and crinolines, sweat streaks down my body. The flies-my most ardent admirers-dart about my face. I swat at one of the little winged beasts, but it escapes and I can almost swear I hear it mocking me. My misery is reaching epidemic proportions.

Overhead, the clouds are thick and dark, giving warning that this is monsoon season, when floods of rain could fall from the sky in a matter of minutes. In the dusty bazaar the turbaned men chatter and squawk and bargain, lifting brightly colored silks toward us with brown, sunbaked hands. Everywhere there are carts lined with straw baskets offering every sort of ware and edible-thin, coppery vases; wooden boxes carved into intricate flower designs; and mangos ripening in the heat.

"How much farther to Mrs. Talbot's new house? Couldn't we please take a carriage?" I ask with what I hope is a noticeable annoyance.

"It's a nice day for a walk. And I'll thank you to keep a civil tone."

My annoyance has indeed been noted.

Sarita, our long-suffering housekeeper, offers pomegranates in her leathery hand. "Memsahib, these are very nice. Perhaps we will take them to your father, yes?"

If I were a good daughter, I'd bring some to my father, watch his blue eyes twinkle as he slices open the rich, red fruit, then eats the tiny seeds with a silver spoon just like a proper British gentleman.

"He'll only stain his white suit," I grumble. My mother starts to say something to me, thinks better of it, sighs-as usual. We used to go everywhere together, my mother and I-visiting ancient temples, exploring local customs, watching Hindu festivals, staying up late to see the streets bloom with candlelight. Now, she barely takes me on social calls. It's as if I'm a leper without a colony.

"He will stain his suit. He always does," I mumble in my defense, though no one is paying me a bit of attention except for the organ-grinder and his monkey. They're following my every step, hoping to amuse me for money. The high lace collar of my dress is soaked with perspiration. I long for the cool, lush green of England, which I've only read about in my grandmother's letters. Letters filled with gossip about tea dances and balls and who has scandalized whom half a world away, while I am stranded in boring, dusty India watching an organ-grinder's monkey do a juggling trick with dates, the same trick he's been performing for a year.

"Look at the monkey, memsahib. How adorable he is!" Sarita says this as if I were still three and clinging to the bottoms of her sari skirts. No one seems to understand that I am fully sixteen and want, no, need to be in London, where I can be close to the museums and the balls and men who are older than six and younger than sixty.

"Sarita, that monkey is a trained thief who will be begging for your wages in a moment," I say with a sigh. As if on cue, the furry urchin scrambles up and sits on my shoulder with his palm outstretched. "How would you like to end up in a birthday stew?" I tell him through clenched teeth. The monkey hisses. Mother grimaces at my ill manners and drops a coin in its owner's cup. The monkey grins triumphantly and leaps across my head before running away.

A vendor holds out a carved mask with snarling teeth and elephant ears. Without a word, Mother places it over her face. "Find me if you can," she says. It's a game she's played with me since I could walk-a bit of hide-and-seek meant to make me smile. A child's game.

Mother gives the mask back to the vendor. I've hit her vanity, her weak point.

"And I see that turning sixteen is not very becoming to

my daughter," she says.

"Yes, I am sixteen. Sixteen. An age at which most decent girls have been sent for schooling in London." I give the word decent an extra push, hoping to appeal to some maternal sense of shame and propriety.

"This looks a bit on the green side, I think." She's peering intently at a mango. Her fruit inspection is all-consuming.

"No one tried to keep Tom imprisoned in Bombay," I say, invoking my brother's name as a last resort. "He's had four whole years there! And now he's starting at university."

"It's different for men."

"It's not fair. I'll never have a season. I'll end up a spinster with hundreds of cats who all drink milk from china bowls." I'm whining. It's unattractive, but I find I'm powerless to stop.

"I see," Mother says, finally. "Would you like to be paraded around the ballrooms of London society like some prize horse there to have its breeding capabilities evaluated? Would you still think London was so charming when you were the subject of cruel gossip for the slightest infraction of the rules? London's not as idyllic as your grandmother's letters make it out to be."

"Gemma . . ." Mother's tone is all warning even as her smile is constant for the Indians. Mustn't let them think we British ladies are so petty as to indulge in arguments on the streets. We only discuss the weather, and when the weather is bad, we pretend not to notice.

Sarita chuckles nervously. "How is it that memsahib is now a young lady? It seems only yesterday you were in the nursery. Oh, look, dates! Your favorite." She breaks into a gap-toothed smile that makes every deeply etched wrinkle in her face come alive. It's hot and I suddenly want to scream, to run away from everything and everyone I've ever known.

"Those dates are probably rotting on the inside. Just like India."

"Gemma, that will be quite enough." Mother fixes me with her glass-green eyes. Penetrating and wise, people call them. I have the same large, upturned green eyes. The Indians say they are unsettling, disturbing. Like being watched by a ghost. Sarita smiles down at her feet, keeps her hands busy adjusting her brown sari. I feel a tinge of guilt for saying such a nasty thing about her home. Our home, though I don't really feel at home anywhere these days.

"Memsahib, you do not want to go to London. It is gray and cold and there is no ghee for bread. You wouldn't like it."

A train screams into the depot down near the glittering bay. Bombay. Good bay, it means, though I can't think of anything good about it right now. A dark plume of smoke from the train stretches up, touching the heavy clouds. Mother watches it rise.

"Yes, cold and gray." She places a hand on her throat, fingers the necklace hanging there, a small silver medallion of an all-seeing eye atop a crescent moon. A gift from a villager, Mother said. Her good-luck charm. I've never seen her without it.

Mother pulls her gaze away from the train, drops her hand from her necklace. "Yes. Come. We'll have a lovely time at Mrs. Talbot's. I'm sure she'll have lovely cakes just for your birthday-"

A man in a white turban and thick black traveling cloak stumbles into her from behind, bumping her hard.

"A thousand pardons, honorable lady." He smiles, offers a deep bow to excuse his rudeness. When he does, he reveals a young man behind him wearing the same sort of strange cloak. For a moment, the young man and I lock eyes. He isn't much older than I am, probably seventeen if a day, with brown skin, a full mouth, and the longest eyelashes I have ever seen. I know I'm not supposed to find Indian men attractive, but I don't see many young men and I find I'm blushing in spite of myself. He breaks our gaze and cranes his neck to see over the hordes.

"You should be more careful," Sarita barks at the older man, threatening him with a blow from her arm. "You better not be a thief or you will be punished."

"No, no, memsahib, only I am terribly clumsy." He drops his smile and with it the cheerful simpleton routine. He whispers low to my mother in perfectly accented English. "Circe is near."

It makes no sense to me, just the ramblings of a very clever thief said to distract us. I start to say as much to my mother but the look of sheer panic on her face stops me cold. Her eyes are wild as she whips around and scans the crowded streets like she's looking for a lost child.