A Ring of Endless Light

A Ring of Endless Light

Struggling to confront her grandfather's impending death, 16-year-old Vicky Austin finds herself the center of attention for three young men, one of whom is a dolphin researcher. When the inevitable crisis comes, she must rely on the love of others — both human and dolphin — to overcome her grief.

NPR stories about A Ring of Endless Light

Excerpt: A Ring Of Endless Light 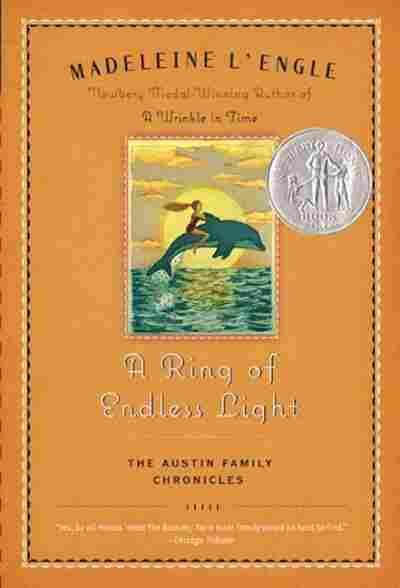 I saw him for the first time at the funeral.

He stood beside my elder brother, John, and they both had closed, clenched jaws and angry eyes. He was as tall as John, and I could see that he was as full of grief over Commander Rodney's death as the rest of us.

I didn't know who he was, but I liked him.

Because he was standing with John, I assumed that he, too, had a summer job at the Marine Biology Station, which was housed in half of the Coast Guard headquarters.

It was a strange place and a strange time to see somebody and know that I wanted to meet him, to call him by name. But there was something about him that struck me as — to use an old-fashioned word — trustworthy; and that's important in an untrustworthy world where death can strike when you aren't looking.

I was sixteen (almost), even if not sweet, and I'd had my first proper kiss at fourteen, but I'd never before stood at an open grave, waiting for a pine box to be lowered into it.

The part at the church hadn't been so bad, maybe because it was in a familiar setting, the small white church on Seven Bay Island, the church we've been to every year of our lives when we've gone to visit our grandfather. It was a sad time, the time at the church, yet it was somehow beyond time, on the other side of time.

Commander Rodney had been our friend for ages. He was Mother and Daddy's age. And he'd died of a heart attack after saving the life of some dumb rich kid who'd gone out in his sailboat in complete disregard of storm warnings. The kid, whoever he was, wasn't at the funeral, and maybe that was a good thing, because I, for one, held him responsible for Commander Rodney's death. And if I felt that way, what did Mrs. Rodney and their kids think? No matter how often our doctor father said you could never be certain what caused a heart attack, and blaming someone was no help at all, I still felt that the capsized sailboat and the half-drowned kid had a lot to do with it.

My little brother, Rob, stood close by me. Commander Rodney had been his special friend, more Rob's friend even than Mother and Daddy's. Rob wasn't crying; he hadn't cried at all; but his face was white, the way it looks when he's going to get flu.

John was near me on my other side. He'd just finished his first year at M.I.T. and tended to think he was so much bigger than the rest of us he hardly condescended to talk to us. But he reached out and held my hand, firmly, something he hadn't done since we were kids. And on John's other side was this unknown young man with sea-grey eyes. Well. Like John, he probably thought he was much too important to talk to anybody who wasn't in college.

Behind them were the people from the Coast Guard and the Marine Biology Station. One man with thick-lensed spectacles and thinning hair was unabashedly wiping his eyes.

My little sister, Suzy, thirteen, going on thirty, was with our parents, near the Rodneys. Mrs. Rodney had her hand on Daddy's arm, as though she couldn't have stood up otherwise. Leo, the oldest, had his arm around her. His eyes were closed, as though to shut out the people and the coffin and the open hole. There was so much pain in him that I turned away and looked at the group from the Marine Biology Station, and at the young man who had stepped forward so that he was just slightly in front of John, and I could look at him without being obvious. He was tall and thinnish — not skinny — and his hair was what Rob calls hair-colored hair, not quite brown, not quite blond, like mine. His eyes were open, and there was somehow light behind them, the way sometimes the light on the ocean seems to come from beneath the water, rather than just being reflected from above. He was standing in a relaxed manner, but a little muscle in his cheek was twitching just slightly, so he wasn't as easy as he seemed.

Looking at him and wondering about him was a good way to keep my mind off what was happening. Then he stepped back so that he was blocked by John, and I had to come into awareness again.

Grandfather stood at the edge of the open grave, dark earth piled up behind him. When we got to the cemetery there'd been a carpet-like thing of phony green grass over the earth, and Grandfather had said with quiet steel, "Take it away," and two of the Coast Guard men had silently removed it. I wondered fleetingly what Mr. Hanchett, the regular minister, would have done. Ever since Grandfather retired and moved to the Island he's taken the church for one month a year, July, so Mr. Hanchett could go on vacation, and that's why he was burying Commander Rodney. His prayer book was open in his hand, although he wasn't reading it. He looked as finely drawn and as beautiful as an El Greco painting, and it was Grandfather who made me want to weep.

"Wonder who'll be the next to go?" a woman behind us asked in a loud whisper. I shivered, the way you're supposed to if someone walks over the place where you're going to be buried.

Grandfather's voice was low, and yet it could have been heard a mile away, I thought. "You only are immortal, the creator and maker of mankind; and we are mortal, formed of the earth, and to earth we shall return. For so did you ordain when you created me, saying, 'You are dust, and to dust you shall return.' All of us go down to the dust; yet even at the grave we make our song: Alleluia, alleluia, alleluia."

No one could miss the joy in Grandfather's voice as he said those alleluias, and his face was so alive, so alight, that I didn't hear what he was saying next. It was as though I had moved into a dream, and I woke up only when, gently but firmly, he pushed away one of the funeral-type men who was handing him a vial of dirt. It was obvious he was making the funeral people feel frustrated, rejecting their plastic grass and their plastic dirt. He was emphasizing the fact that Commander Rodney's death was real, but this reality was less terrible than plastic pretense.

I looked at the rich, dark brown of the piled earth, and there, hovering over it, was a gorgeous red-and-gold butterfly. Its wings moved delicately and it flew over the coffin and quivered in beauty as it hovered there. Grandfather saw it, too, because he stood still, looking, before he reached down and took a handful of earth and threw it onto the coffin, which had been lowered into the grave. "Earth to earth," he said, "ashes to ashes, dust to dust." The butterfly still hovered. And the words which followed seemed to me to have more to do with the butterfly than with what he had just said. "The Lord bless him and keep him, the Lord make his face to shine upon him and be gracious unto him, the Lord lift up his countenance upon him, and give him peace."

Slowly, gracefully, the butterfly flew off and was lost in the dappled shadows of the trees.

I looked from the butterfly to Leo Rodney. I've always thought of Leo as a slob and wiped off his kisses (which certainly didn't count as real ones), and I didn't much like him now, but that was his father in that box there, that box that was going to be covered with earth, not plastic, but real earth, which grass could grow in and butterflies fly over. I looked at Leo and his face was all splotchy as though he had cried and cried, but he hadn't cried, and he needed to. I wasn't sure what anybody cried about, not with my grandfather saying those paradoxical, contradictory words.

And my grandfather was dying.

The woman's whisper stuck in my ears: "Wonder who'll be the next to go?"

Unless some kind of unforeseen accident happened — as it had happened to Commander Rodney — my grandfather was likely to be the next one. He had leukemia.

And he was saying all those words as calmly as though he had all the answers about life and death and God and all the cosmic things. And Grandfather would be the first to say he doesn't.

Leo moved just then, calling my attention to him; and I remembered last year, when he was on a religious kick and was telling us exactly what God is like, Grandfather had said quietly — not rebukingly, just quietly — "As St. Augustine says: If you think you understand, it isn't God."

Looking at Leo, I wished he was still on his religious trip, when he thought he knew all the answers to everything.

It was over. We were going to the Rodneys' to help out when the people of Seven Bay Island came to pay their respects. The house was full of casseroles and salads and pies and all the things people had been bringing in; Mrs. Rodney wouldn't have to cook a meal for weeks. It was a good thing they had a big freezer for all those funeral baked meats.

Excerpted from A Ring of Endless Light by Madeleine L'Engle. Copyright 1980 by Crosswicks, Ltd. Excerpted by permission of Macmillan.