The Truth About Forever

The Truth About Forever

The summer after her father's death, Macy plans to work at the library and wait for her brainy boyfriend to return from camp; instead, she goes to work at a catering business where she makes new friends and finally faces her grief.

NPR stories about The Truth About Forever

Excerpt: The Truth About Forever 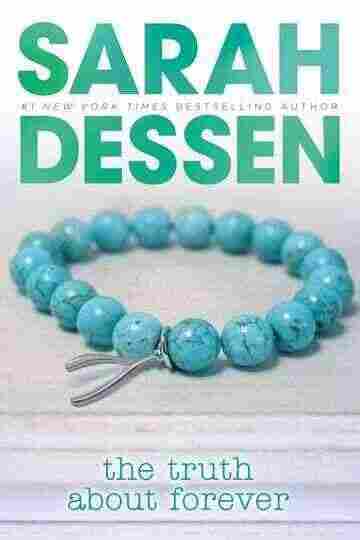 Jason was going to Brain Camp. It had another name, a real name, but that's what everyone called it.

"Okay," he said, wedging a final pair of socks along the edge of his suitcase. "The list. One more time."

I picked up the piece of paper beside me. "Pens," I said. "Notebooks. Phone card. Camera battery. Vitamins."

His fingers moved across the contents of the bag, finding and identifying each item. Check and double-check. With Jason, it was always about being sure.

"Stop," he said, putting up his hand. He walked over to his desk, unzipping the slim black bag there, then nodded at me. "Skip down to list number two."

I scanned down the page, found the words LAPTOP (CASE), and cleared my throat. "Blank CDs," I said. "Surge protector. Headphones. . . ."

By the time we'd covered that, then finished the main list — stopping to cover two other sub-headings, TOILETRIES and MISCELLANEOUS — Jason seemed pretty much convinced he had everything. Which did not, however, stop him from continuing to circle the room, mumbling to himself. It took a lot of work to be perfect. If you didn't want to break a sweat, there was no point in even bothering.

Jason knew perfect. Unlike most people, for him it wasn't some distant horizon. For Jason, perfect was just over the next hill, close enough to make out the landscape. And it wasn't a place he would just visit. He was going to live there.

He was the all-state math champ, head of the debate team, holder of the highest GPA in the history of our high school (he'd been taking AP classes since seventh grade, college sections since tenth), student council president two years running, responsible for an innovative school recycling program now implemented in districts around the country, fluent in Spanish and French. But it wasn't just about academics. Jason was also a vegan and had spent the past summer building houses for Habitat for Humanity. He practiced yoga, visited his grandmother in her rest home every other Sunday, and had a pen pal from Nigeria he'd been corresponding with since he was eight years old. Anything he did, he did well.

A lot of people might find this annoying, even loathsome. But not me. He was just what I needed.

I had known this from the first day we met, in English class sophomore year. We'd been put into groups to do an assignment on Macbeth, me and Jason and a girl named Amy Richmond who, after we pulled our desks together, promptly announced she was "no good at this Shakespeare crap" and put her head down on her backpack. A second later, she was sound asleep.

Jason just looked at her. "Well," he said, opening his textbook, "I guess we should get started."

This was right after everything happened, and I was in a silent phase. Words weren't coming to me well; in fact I had trouble even recognizing them sometimes, entire sentences seeming like they were another language, or backwards, as my eyes moved across them. Just printing my own name on the top of a page a few days previously, I'd second-guessed the letters and their order, not even sure of that anymore.

So of course Macbeth had totally mystified me. I'd spent the entire weekend struggling with the antiquated language and weird names of the characters, unable to even figure out the most basic aspects of the story. I opened my book, staring down at the lines of dialogue: Had I but died an hour before this chance/I had liv'd a blessed time; for, from this instant,/ there's nothing serious in mortality:/all is but toys.

Nope, I thought. Nothing.

Lucky for me, Jason, who was not about to leave his grade in someone else's hands, was used to taking control of group work. So he opened his notebook to a clean page, pulled out a pen, and uncapped it. "First," he said to me, "let's just get down the basic themes of the play. Then we can figure out what to write about."

I nodded. All around us I could hear our classmates chattering, the tired voice of our English teacher, Mr. Sonnenberg, telling us again to please settle down.

Jason skipped down a few lines on his page. Murder, I watched him write. His handwriting was clean, block-style, and he moved across the page quickly. Power. Marriage. Revenge. Prophecy. Politics. It seemed like he could go on forever, but then he stopped and looked at me. "What else?" he asked.

I glanced back down at my book, as if somehow, the words there would suddenly form together into something coherent. I could feel Jason looking at me, not unkindly, just waiting for me to contribute.

"I don't . . ." I said finally, then stopped, the words sticking. I swallowed, then started over. "I don't understand it. Actually."

I was sure, hearing this, he'd shoot me the same look he'd given Amy Richmond. But Jason surprised me, putting down his pen. "Which part?"

"Any of it," I said, and when he didn't roll his eyes as I'd been expecting, I added, "I mean, I know there's a murder plot and I know there's an invasion but the rest . . . I don't know. It's totally confusing."

"Look," he said, picking up his pen again. "It's not as complicated as you think. The key to really understanding is to start with the prophecy about what's going to happen . . . see, here. . . ." He started flipping pages in his book, still talking, and pointed out a passage to me. Then he read it aloud, and as his finger moved across the words it was like he changed them, magic, and suddenly they made sense.

And I felt comfort. Finally. All I'd wanted for so long was for someone to explain everything that had happened to me in this same way. To label it neatly on a page: this leads to this leads to this. I knew, deep down, it was more complicated than that, but watching Jason, I was hopeful. He took the mess that was Macbeth and fixed it, and I had to wonder if he might, in some small way, be able to do the same for me. So I moved myself closer to him, and I'd been there ever since.

Now, he zipped up his laptop case and put it on the bed with the rest of his stuff. "Okay," he said, taking one last glance around the room. "Let's go."

His mom and dad were already in their Volvo when we came outside. Mr. Talbot got out, opened the trunk, and he and Jason took a few minutes getting everything situated. As I got in the backseat and put on my seatbelt, Mrs. Talbot turned around and smiled at me. She was a botanist, her husband a chemist, both of them professors. They were so scholarly that every time I saw either of them without a book in their hands they looked weird to me, as if they were missing their noses, or their elbows.

I tried not to think about this as she said, "So, Macy. What are you going to do until August without Jason?"

"I don't know," I said. I was working at the library, taking over Jason's job at the information desk, but other than that, the next eight weeks were just looming ahead, empty. While I had a few friends from student council, most had gone away for the summer themselves, to Europe or camp. To be honest, Jason's and my relationship was pretty time consuming: between yoga classes and student government stuff, not to mention all the causes we dealt with, there just hadn't been much time for anyone else. Besides, Jason got easily frustrated with people, so I'd been hesitant to invite new people out with us. If they were slow, or lazy in any way, he lost patience fast, and it was just easier to hang out with him, or with his friends, who could keep up with him. I'd never really thought about this as a bad thing, actually. It was just how we were.

On the way to the airport, Jason and his dad discussed some elections that had just happened in Europe; his mom fretted about construction traffic; and I sat there, looking at the inch between Jason's knee and mine and wondering why I didn't try to move closer to him. This wasn't new. He hadn't even kissed me until our third date, and now, after a year and a half, we still hadn't discussed going all the way. At the time we met, someone just hugging me still felt like too much to bear. I didn't want anyone to get too close. So this had been all I wanted, a boy who understood how I felt. Now, though, I sometimes wished for more.

At the airport, we said good-bye at the gate. His parents hugged him, then discreetly walked across the waiting room to stand at the window there, looking out at the runway and the big stretch of blue sky that hung over it. I put my arms around Jason, breathing in his smell — sport stick deodorant and acne cleanser — deeply, so I'd get enough to last me awhile.

He kissed me on the forehead. Then, quickly, so quickly I didn't even have time to react, on the lips. He leaned back and looked at me, tightening his arms around my waist.

"I'll email you," he said, and kissed me on the forehead again. As they called his flight and he disappeared down the hallway to the plane, I stood with the Talbots and watched him go, feeling a tug in my chest. It was going to be a long summer. I'd wanted a real kiss, something to remember, but I'd long ago learned not to be picky in farewells. They weren't guaranteed or promised. You were lucky, more than blessed, if you got a good-bye at all.