I Am the Messenger

I Am the Messenger

Title
I Am the Messenger
Author
Markus Zusak

The dull and drab life of Ed, an underage cab driver with a coffee-addicted dog, takes an unexpected turn when he accidentally stops a bank robbery and finds himself being placed in charge of watching out for the entire town.

NPR stories about I Am the Messenger

Excerpt: I Am The Messenger 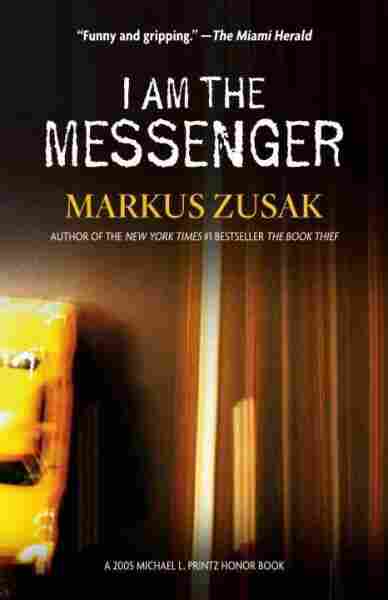 The gunman is useless.

The whole bank knows it.

Even my best mate, Marvin, knows it, and he's more useless than the gunman.

The worst part about the whole thing is that Marv's car is standing outside in a fifteen-minute parking zone. We're all facedown on the floor, and the car's only got a few minutes left on it.

"I wish this bloke'd hurry up," I mention.

"I know," Marv whispers back. "This is outrageous." His voice rises from the depths of the floor. "I'll be getting a fine because of this useless bastard. I can't afford another fine, Ed."

"The car's not even worth it."

Marv looks over at me now. I can sense he's getting uptight. Offended. If there's one thing Marv doesn't tolerate, it's someone putting shit on his car. He repeats the question.

I tune out of what he's saying because, quite frankly, once Marv gets going about his car, it's downright pain-in-the-arse material. He goes on and on, like a kid, and he's just turned twenty, for Jesus' sake.

He goes on for another minute or so, until I have to cut him off.

"Marv," I point out, "the car's an embarrassment, okay? It doesn't even have a hand brake — it's sitting out there with two bricks behind the back wheels." I'm trying to keep my voice as quiet as possible. "Half the time you don't even bother locking it. You're probably hoping someone'll flog it so you can collect the insurance."

"NRMA said it wasn't worth it."

That's when the gunman turns around and shouts, "Who's talkin' back there?"

Marv doesn't care. He's worked up about the car.

"You don't complain when I give you a lift to work, Ed, you miserable upstart."

"Upstart? What the hell's an upstart?"

"I said shut up back there!" the gunman shouts again.

"Hurry up then!" Marv roars back at him. He's in no mood now. No mood at all.

He's facedown on the floor of the bank.

The bank's being robbed.

It's abnormally hot for spring.

His car's just been insulted.

Old Marv's at the end of his tether, or his wit's end. Whatever you want to call it — he's got the shits something terrible.

We remain flattened on the worn-out, dusty blue carpet of the bank, and Marv and I are looking at each other with eyes that argue. Our mate Ritchie's over at the Lego table, half under it, lying among all the pieces that scattered when the gunman came in yelling, screaming, and shaking. Audrey's just behind me. Her foot's on my leg, making it go numb.

The gunman's gun is pointed at the nose of some poor girl behind the counter. Her name tag says Misha. Poor Misha. She's shivering nearly as bad as the gunman as she waits for some zitty twenty-nine-year-old fella with a tie and sweat patches under his arms to fill the bag with money.

"I wish this bloke'd hurry up," Marv speaks.

"I said that already," I tell him.

"Get your foot off me," I tell Audrey.

She moves it. Reluctantly.

The gunman turns around and shouts his question for the last time. "Who's the bastard talking?"

The thing to note with Marv is that he's problematic at the best of times. Argumentative. Less than amiable. He's the type of friend you find yourself constantly arguing with — especially when it comes to his shitbox Falcon. He's also a completely immature arsehole when he's in the mood.

He calls out in a jocular manner, "It's Ed Kennedy, sir. It's Ed who's talking!"

(My full name's Ed Kennedy. I'm nineteen. I'm an underage cabdriver. I'm typical of many of the young men you see in this suburban outpost of the city — not a whole lot of prospects or possibility. That aside, I read more books than I should, and I'm decidedly crap at sex and doing my taxes. Nice to meet you.)

"Well, shut up, Ed!" the gunman screams. Marv smirks. "Or I'll come over there and shoot the arse off you!"

It's like being in school again and your sadistic math teacher's barking orders at you from the front of the room, even though he couldn't care less and he's waiting for the bell so he can go home and drink beer and get fat in front of the telly.
I look at Marv. I want to kill him. "You're twenty years old, for Christ's sake. Are you trying to get us killed?"

"Shut up, Ed!" The gunman's voice is louder this time.

I whisper even quieter. "If I get shot, I'm blaming you. You know that, don't you?"

"Right, that's it." The gunman forgets about the woman behind the counter and marches over to us, fed up as all buggery. When he arrives we all look up at him.
Marv.

And all the other hopeless articles like us sprawled out on the floor.

The end of the gun touches the bridge of my nose. It makes it itchy. I don't scratch it.

The gunman looks back and forth between Marv and me. Through the stocking on his face I can see his ginger whiskers and acne scars. His eyes are small and he has big ears. He's most likely robbing the bank as a payback on the world for winning the ugliness prize at his local fete three years running.

"Him," I answer, pointing to Marv.

"Oh no you don't," Marv counters, and I can tell by the look on his face that he isn't as afraid as he should be. He knows we'd both be dead by now if this gunman was the real thing. He looks up at the stocking-faced man and says, "Hang on a sec... ." He scratches his jawline. "You look familiar."

"Okay," I admit, "I'm Ed." But the gunman's too busy listening to what Marv has to say for himself.