When everyone over the age of 14 suddenly disappears from a California town, a battle erupts between the remaining residents and the students from a local school, as well as those who have "The Power" and those who do not. 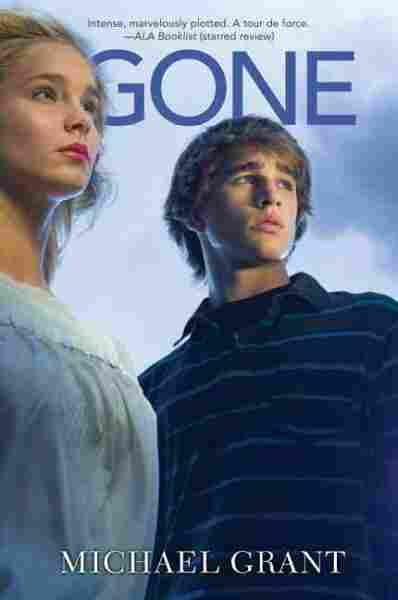 One minute the teacher was talking about the Civil War. And the next minute he was gone.

No "poof." No flash of light. No explosion.

Sam Temple was sitting in third-period history class staring blankly at the blackboard, but far away in his head. In his head he was down at the beach, he and Quinn. Down at the beach with their boards, yelling, bracing for that first plunge into cold Pacific water.

Sam turned to Mary Terrafino, who sat just to his left. "You saw that, right?"

Mary was staring hard at the place where the teacher had been.

"Um, where's Mr. Trentlake?" It was Quinn Gaither, Sam's best, maybe only, friend. Quinn sat right behind Sam. The two of them favored window seats because sometimes if you caught just the right angle, you could actually see a tiny sliver of sparkling water between the school buildings and the homes beyond.

"He must have left," Mary said, not sounding like she believed it.

Edilio, a new kid Sam found potentially interesting, said, "No, man. Poof." He did a thing with his fingers that was a pretty good illustration of the concept.

Kids were staring at one another, craning their necks this way and that, giggling nervously. No one was scared. No one was crying. The whole thing seemed kind of funny.

"Mr. Trentlake poofed?" said Quinn, with a suppressed giggle in his voice.

"Was he here today?"

"Yes, he was here. He was right here next to me." Sam recognized the voice. Bette. Bouncing Bette.

The door to the hallway opened. Every eye locked on it. Mr. Trentlake was going to step in, maybe with Josh, and explain how he had pulled off this magic trick, and then get back to talking in his excited, strained voice about the Civil War nobody cared about.

But it wasn't Mr. Trentlake. It was Astrid Ellison, known as Astrid the Genius, because she was . . . well, she was a genius. Astrid was in all the AP classes the school had. In some subjects she was taking online courses from the university.

Astrid had shoulder-length blond hair, and liked to wear starched white short-sleeved blouses that never failed to catch Sam's eye. Astrid was out of his league, Sam knew that. But there was no law against thinking about her.

There was a collective shrug. "He poofed," Quinn said, like maybe it was funny.

"Isn't he out in the hallway?" Mary asked.

Astrid shook her head. "Something weird is happening. My math study group . . . there were just three of us, plus the teacher. They all just disappeared."

Astrid looked right at him. He couldn't look away like he normally would, because her gaze wasn't challenging, skeptical like it usually was: it was scared. Her normally sharp, discerning blue eyes were wide, with way too much white showing. "They're gone. They all just . . . disappeared."

"What about your teacher?" Edilio said.

"Poof," Quinn said, not giggling so much now, starting to think maybe it wasn't a joke after all.

Sam noticed a sound. More than one, really. Distant car alarms, coming from town. He stood up, feeling self-conscious, like it wasn't really his place to do so, and walked on stiff legs to the door. Astrid moved away so he could step past her. He could smell her shampoo as he went by.

Sam looked left, down toward room 211, the room where Astrid's math wonks met. The next door down, 213, a kid stuck out his head. He had a half-scared, half-giddy expression, like someone buckling into a roller coaster.

The other direction, down at 207, kids were laughing too loud. Freaky loud. Fifth graders. Across the hall, room 208, three sixth graders suddenly burst out into the hallway and stopped dead. They stared at Sam, like he might yell at them.

Perdido Beach School was a small-town school, with everyone from kindergarten to ninth grade all in one building, elementary and middle school together. High school was an hour's drive away in San Luis.

Sam walked toward Astrid's classroom. She and Quinn were right behind him.

The classroom was empty. Desk chairs, the teacher's chair, all empty. Math books lay open on three of the desks. Notebooks, too. The computers, a row of six aged Macs, all showed flickering blank screens.

On the chalkboard you could quite clearly see "Polyn."

"She was writing the word 'polynomial,'" Astrid said in a church-voice whisper.

"Yeah, I was going to guess that," Sam said dryly.

"I had a polynomial once," Quinn said. "My doctor removed it."

Astrid ignored the weak attempt at humor. "She disappeared in the middle of writing the 'o.' I was looking right at her."

Sam made a slight motion, pointing. A piece of chalk lay on the floor, right where it would have fallen if someone were writing the word "polynomial" — whatever that meant — and had disappeared before rounding off the "o."

"This is not normal," Quinn said. Quinn was taller than Sam, stronger than Sam, at least as good a surfer. But Quinn, with his half-crazy half-smile and tendency to dress in what could only be called a costume — today it was baggy shorts, Army-surplus desert boots, a pink golf shirt, and a gray fedora he'd found in his grandfather's attic — put out a weird-guy vibe that alienated some and scared others. Quinn was his own clique, which was maybe why he and Sam clicked.

Sam Temple kept a lower profile. He stuck to jeans and understated T-shirts, nothing that drew attention to himself. He had spent most of his life in Perdido Beach, attending this school, and everybody knew who he was, but few people were quite sure what he was. He was a surfer who didn't hang out with surfers. He was bright, but not a brain. He was good-looking, but not so that girls thought of him as a hottie.