NPR stories about The Age of Desire 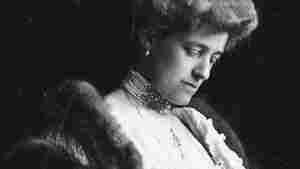 Edith Wharton moved to Paris in the early 1900s. Not long after, in 1913, after her affair with Morton Fullerton had ended, she divorced her husband of more than 20 years. Beinecke Rare Book and Manuscript Library, Yale University hide caption

August 10, 2012 • Jennie Fields' new novel, The Age of Desire, reimagines Edith Wharton's fling with a young journalist and the obsession that accompanied its fallout. Without that experience, Fields says, Wharton's The Age of Innocence would not have been the same.

Excerpt: The Age Of Desire

Anna stands in front of Edith at her writing desk, her hands clasped, feeling all energy and intent drain from her. When she came into the study, Edith was writing a letter, and Anna's intrusion made her turn it upside down on her desk with childlike furtiveness.

"What on earth is the matter with you, Anna?" Edith asks. "Just say what you've come to say." Her voice is not harsh, her eyes not truly angry. But her brusque words send Anna even deeper into the morass of silence that provoked them.

"There's something I need to tell you," she says to Edith. "But maybe it would be best to come back later." She steps backward toward the door.

"Is this about Teddy?" Edith asks. "Because I've heard from him, just this morning. He's arrived in Hot Springs."

"Is he there at last? I'm so glad." She feels a breathtaking weight lifted from her, imagining Teddy bathed in warm, soothing waters.

"Of course, there's no word yet, but I have great hopes they can help him."

"Oh, I dearly hope so. He's so despondent, in so much pain."

"Yes, so he tells me again and again," Edith says. It hurts Anna to hear how dismissively she speaks of her husband. "What did you come to say, Tonni?"

Again, this morning, Edith didn't leave Anna a single page to type. Not one. And Gross said she didn't touch a bite of her luncheon. She looks high in color too. Keyed up.

"I've heard something," Anna finds the courage to say. "About Mr. Fullerton. I didn't want to tell you, but I decided you shouldn't . . . wouldn't want to hear it from others."

Edith's eyes fly to Anna's face. "What about him?"

"I got a letter from Kate Thorogood?"

"She wrote about Mr. Fullerton?"

"She said that he's . . ." Anna looks at her shoes, which need polishing. When she is done with this misery, she can polish her shoes. Then scrub the shoe polish from her fingernails. She would like to scrub the very skin from her hand. Edith will hate her when she reveals what she knows. Why did she embark on this terrible path?

"He's engaged to be married."

"What?" Edith bursts out laughing. "Mr. Fullerton? That's absurd. To whom? To whom does Miss Thorogood think he's engaged?"

Every ounce of color drains from Edith's cheeks.

"That is not a funny joke."

"I didn't think so either. His sister was adopted by his family. She's a cousin, in fact. And last summer when he was at Bryn Mawr, he asked her to marry him."

"That's . . . why, that's impossible! He came to The Mount right after Bryn Mawr. He didn't breathe a word." Edith's nostrils flare.

"His parents objected at first. But now they are telling everyone there will be a wedding. Kate asked if—seeing as you're such good friends with Mr. Fullerton—you're invited to the wedding."

"I was just going to write her back and say there had been some mistake. But I thought I should speak to you first, in case you knew something."

"If he was engaged, I'd know," Edith says. Her voice is cold with confidence, but her eyes betray her. They dart about the room, full of question.

"I hardly know him."

"But you've already told me that you don't approve of our relationship."

"I merely said that it would be good if you spent less time with him—when Mr. Wharton was here, it upset him."

Edith could not have hurt Anna more if she'd slapped her across the face. The words hang in the air like gunpowder, sulfurous, volatile. Anna tries to find her composure, but the pain addles her. And when she does speak, each word comes out on its own, slowly, devastatingly. "All I've ever wanted is happiness for you," Anna says.

When Edith was little, Anna called her Herz. Heart, in German. Edith used to sign her letters to Anna "Herz." All these years, Edith has held Anna's heart. But where is Edith's heart?

"And you think my happiness will ever come from an imbecile like Teddy Wharton?"

"Please! Please don't call him that. You can't see who he is anymore. You've forgotten how good he is."

"I never loved him."

"I mean it," she says, her voice so icy it wraps crystals around Anna's heart. Anna can taste tears on her tongue. Her throat burns. It is the kind of silenced inward weeping only a woman who lives a tangential life could know. Poor, dear Teddy!

Anna takes a deep breath and tries to find the even tone she used to use when her students provoked her. "He loves you. He counts on you. You made a vow. You have a responsibility. If we all pursued nothing but happiness, the world would crumble. The ill, the old would be alone with no one to care for them. We'd be adrift in a sea."

"Look at me," Edith says. "Do you see me before you? Well, it's a miracle, because I've been dead for years," Edith says. "Like a ghost. I've been snuffed out by my sense of duty toward Teddy Wharton. I am finally tasting life. How can you ask me to spit it out?"