Batman's biggest secret isn't Bruce Wayne — it's his forgotten co-creator, Bill Finger. Batman is usually credited to Bob Kane, who'd been commissioned by DC Comics to come up with a hit superhero. But Kane approached Finger for help — and it was Bill Finger who invented everything from Gotham City to Batman's tragic backstory. But he never got the credit — until recently. Illustrations by Ty Templeton.

NPR stories about Bill the Boy Wonder: The Secret Co-Creator of Batman 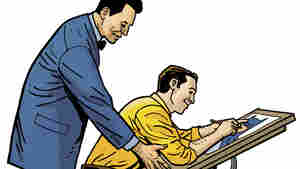 Bill Finger (left) helped create the Batman we know today, including his iconic costume, his tragic backstory, and many of his adversaries. Ty Templeton hide caption

August 11, 2012 • Bob Kane gets all the credit for creating the superhero. But author Marc Tyler Nobleman argues that a long-forgotten writer, Bill Finger, created almost everything we now associate with the Dark Knight, from his cape and cowl costume to the name Gotham City.