The Fight for Home

The Fight for Home

How (Parts of) New Orleans Came Back

The Fight for Home traces the author's five-year effort to document New Orleans' rebuilding efforts after Hurricane Katrina, revealing how the city served as a reinvention of American ideals as advocated by urban planners, celebrities, politicians and anarchists against a backdrop of an emerging national recession.

NPR stories about The Fight for Home 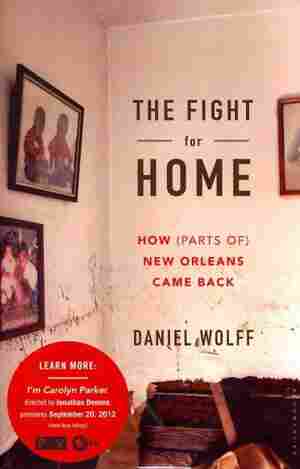 Excerpt: The Fight For Home

It's seven-thirty on a January morning, and it feels as if this ground-floor meeting room is underwater. The light coming in through the west window looks damp; there's a smell of mold; the whitewashed cinder-block walls sweat. And the eleven men sitting behind school desks could be half drowned.

They're ex-addicts. Or they're hoping to be ex-addicts. Most of the men here are in the middle of their initiation period: trying to stay straight for ninety days. It's like trying to hold their breath that long.

"These are the men of Bethel Colony South," says their leader, Pastor Mel. He's a dark-skinned man with a shaved head, a hooked nose, and a black moustache. The glint in his dark eyes makes him look a little like a pirate or a riverboat gambler. Broad- shouldered, over six feet tall, wearing a blue work shirt and blue jeans, he carries himself like an old high school athlete, now in his fifties. He's an ex-addict, too.

Mel calls what he runs "a transformational ministry." The men have tough, dulled faces, lots of broken noses and scars, tattoos on hands and arms. Some might be called white, some black, some Latino or Native American. Most look to be in their thirties or forties. Most are homeless. On the desk in front of each of them, there's an open notebook, a pen, and a Bible.

"You notice how, when you start drawing near to God," Pastor Mel says

from the front of the room, "people start drawing near to you? ... The more you grow in God's righteousness, the stronger you will become." He reads from the first psalm, first three verses: "Blessed is the man that walketh not in the counsel of the ungodly ... But his delight is in the law of the LORD ... And he shall be like a tree planted by the rivers of water, that bringeth forth his fruit in his season ... and whatsoever he doeth shall prosper."

Mel, wearing reading glasses, jabs his finger in the air as he interprets the text. The "ungodly," he says, include crackheads — like many of these men were, like he once was. Don't return to "those old things," Mel declares; "move when they start talking negative!" He addresses each man by name, calls on them to delight in the Lord. They answer when spoken to, but only a few seem eager. The rest, under the fluorescent light, look logy, submerged.

"I thought that was a good devotional for this morning," Mel concludes. "Amen?"

Some of the men offer a quiet "Amen."

If they serve, the text says, they shall prosper. Like a tree planted by the rivers. In this room, as the damp light streams in against the damp wall, the metaphor can't help but carry associations.

Five months ago today — almost to the hour of the morning — Louisiana governor Kathleen Blanco asked President George W. Bush to declare a state-wide emergency. A hurricane named Katrina was about 400 miles from the mouth of the Mississippi. Here at Bethel South, in the Gentilly neighborhood of New Orleans, the men were boarding up the building and deciding whether to leave.

Sunday at ten a.m., New Orleans mayor Ray Nagin ordered a mandatory evacuation of the city. It was, in some ways, a success. In less than forty hours, more than a million people fled the metropolitan area, twice as many as had ever evacuated a U.S. city before. But some 50,000 remained, the majority of them poor and elderly.

"I want Brother Dwight to stand up," Mel says, "and talk about his experience with the hurricane." Dwight is a puff y-eyed black man in a green sweater, a black knit UNC cap pulled over his hair. He starts slowly, a little shy, looking down at the yellow and green linoleum, not sure what to say.

"About ten of us chose to stay with Pastor. We didn't know what the situation was going to bring and, being that this is a low- lying building, we figured we'd go over to the seminary." The New Orleans Baptist Theological Seminary is just across the street. " 'Cause we felt more stable at the seminary; they had generators and food and bottled water and things like that.

"Hurricane came," Dwight goes on. "It was three when it hit. Wasn't that bad. Matter of fact, myself, other members of Bethel South, and some staff that was at the seminary were outside smoking, two or three o'clock in the morning. We had to kinda push the door open. But you know the wind — it was Category 3 — wasn't that bad."

The National Hurricane Center says that by the time Katrina reached New Orleans, wind velocities had actually gone down. Most of the city was hit with a Category 1 or 2 storm. But the tidal surge, when it reached the Louisiana coast, was eighteen to twenty-five feet high.

"The next morning when we woke up ... about six o'clock in the morning, I could still see grass on the ground. By eight o'clock, I couldn't. By ten o'clock, water was a couple feet deep. We could see one of the manhole covers behind the seminary just pop off the ground. Just popped up like, uh, Old Faithful. The geyser." At six-thirty Monday morning, three levees near the seminary started to fail; at nine-thirty, they were failing "catastrophically."

"We still didn't know the extent of the devastation that was being caused by the levee being broke," Dwight continues. "Finally, the news showed a bird's-eye view — from a helicopter, I guess — of the Ninth Ward. How the water was coming in. It was devastating, but still, we didn't see it firsthand."

Then a friend of Mel's decided he needed to go back to his house "to get his insurance papers out the attic ... The Pastor asked me to go with him. I hadn't been no farther than the seminary, so I didn't know what to expect. He had a canoe. Not a canoe!" Dwight smiles at himself, at getting it wrong. "He had a flat-bottomed boat. We were paddling. And I'm seeing dead dogs and cats and dogs stranded on top of cars and people stranded on top of houses ... It was — it was frightening, you know? You had people standing on top of houses waving for helicopters, and the helicopters just passing them by."

By early Monday morning, Gentilly was thigh-deep in water. Then came a second wave of flooding. Soon 80 percent of the city was submerged. Everything was swept aside: people, buildings, trees standing by

Pastor Mel and his remaining men discovered that Bethel South was relatively dry and started using it as a staging area. "We had found a couple boats ... We had maybe four boats," Dwight says. "And we was going off in different directions. People were calling. Pastor had put the word out that if anybody needed a little refuge to come to Bethel South. And told them where we were.

"Then there were some guys — some volunteers, I mean; no one was getting paid because this wasn't part of FEMA — there was some guys coming to the corner there" — Dwight gestures toward the front of the room — "in a motorboat. We were dry here! It was four feet deep over there." He points to his right. "And about four feet deep over there." He points to his left . One of the men laughs. "And we were dry here. But those guys were coming in motorboats and taking people to the interstate, where a helicopter was picking them up and taking them to the Superdome. I don't know if they were going to the Convention Center at that particular time. But anyway, they would come up four or five times a day ... They'd say, 'You got any people there?' And they'd pick everybody up."

The rescue operation wasn't supposed to be run by a bunch of ex-addicts and volunteers. FEMA, the Federal Emergency Management Agency, had been designed to come into situations like this and provide food, water, transportation. But since the attacks on the World Trade Center four years earlier, the agency had been downsized and put under the jurisdiction of Homeland Security. Its leadership not only was inexperienced but had taken to calling disaster relief an "oversized entitlement program" and recommending victims should look to "faith-based organizations" instead of government.

It wasn't till Tuesday night that FEMA declared the flood "an incident of national significance." By then it was becoming clear, as a House and Senate committee would later put it, that the response in New Orleans was "a national failure, an abdication of the most solemn obligation to provide for the common welfare."