Accessibility links
The Brontes NPR coverage of The Brontes: Wild Genius on the Moors: The Story of a Literary Family by Juliet Barker. News, author interviews, critics' picks and more.

Wild Genius On The Moors: The Story Of A Literary Family

Title
The Brontes
Subtitle
Wild Genius On The Moors: The Story Of A Literary Family
Author
Juliet Barker

A history of the Bronte family is based on years of research and correspondence by each family member, challenging traditionally accepted portraits of the patriarchal Patrick and revealing Charlotte's ruthless nature, in a revised edition that incorporates the newest research.

NPR stories about The Brontes 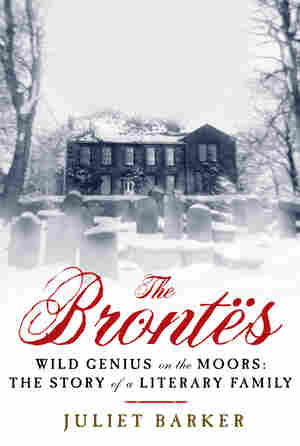 August 27, 2012 • Juliet Barker has released a new edition of her landmark 1994 biography, The Brontes. Critic Maureen Corrigan says that even the 136 pages of footnotes are "thrilling," as readers are taken "deeper into the everyday realities" of the Brontes' "strange world."

Yet another biography of the Brontes requires an apology, or at least an explanation. Their lives have been written so many times that there ought to be nothing left to say. Mrs. Gaskell's Life of Charlotte Bronte, published within two years of her subject's death, set a new standard in literary biography and is still widely read. In more recent times, Winifred Gerin and Rebecca Fraser have added considerably to our knowledge by publishing material, which was not available to, or was suppressed by, Mrs. Gaskell. The Brontes' lives and works have been taken apart and reassembled according to theories of varying degrees of sanity by literally hundreds of other biographers and literary critics.

What is surprising is that, despite so much activity, the basic ideas about the Brontes' lives have remained unchanged. Charlotte is portrayed as the long-suffering victim of duty, subordinating her career as a writer to the demands of her selfish and autocratic father; Emily is the wild child of genius, deeply misanthropic yet full of compassion for her errant brother; Anne is the quiet, conventional one who, lacking her sisters' rebellious spirit, conforms to the demands of society and religion. The men in their lives have suffered an even worse fate, blamed first of all by Mrs Gaskell, and since then by feminists, for holding the Bronte sisters back from achieving literary success and even, at times, for simply existing. Patrick is universally depicted as cold, austere and remote, yet given to uncontrollable rages, alternately neglecting and tyrannizing his children. Branwell is a selfish braggart, subordinating his sisters' lives to his own by right of his masculinity, and negating the value of this sacrifice by squandering his talent and the family's money on drink and drugs. Arthur Bell Nicholls, who cannot be portrayed as either mad or bad, is simply dull.

These stereotypes have been reinforced by the practice of writing separate biographies for each member of the family. Yet the most remarkable thing about the Brontes is that one family produced three, if not four, talented writers, and it is the fact that they were such an extraordinarily close family that is the key to their achievements. Taking one of them out of con- text creates the sort of imbalance and distortion of facts that has added considerably to the Bronte legend. A love poem by Anne, for instance, can be interpreted as autobiographical — unless one is aware that Emily was writing on the same subject at the same time in a Gondal setting. Though many have tried, it is impossible to write an authoritative biography of either of the two youngest Bronte sisters. The known facts of their lives could be written on a single sheet of paper; their letters, diary papers and drawings would not fill two-dozen. Understandably but, I believe, misguidedly, biographers have fallen back on literary criticism to fill the void. Trawling through the Brontes' fiction in search of some deeply hidden autobiographical truth is a subjective and almost invariably pointless exercise.

In this biography I have deliberately chosen to write about the whole Bronte family, hoping that this will redress the balance and enable the reader to see the Brontes as they lived, not in isolation, but as a tightly knit group. I am well aware that some members of the household are more prominent than others. Aunt Branwell and Tabby Aykroyd, despite my best endeavors, remain mere ciphers. Regrettably, Emily and Anne are also shadowy figures. This is the inevitable result of lack of biographical information but it is, I think, preferable to fanciful interpretation of their fiction. Virginia Moore's misreading of 'Love's Farewell' as 'Louis Parensell', resulting in an elaborate theory about Emily's secret lover, is a dire warning as to where such a method can lead.

The Bronte story has always been riddled with myths. Charlotte herself started the process in an attempt to explain why her sisters had written novels, which had both shocked and titillated the literary critics. Mrs. Gaskell ably extended this argument to Charlotte herself, producing in her Life of Charlotte Bronte a persuasive and powerful polemic, which has never been seriously challenged. Instead of being writers of 'naughty books', who reveled in vulgarity and brutality, the Brontes thus became graduates of the school of adversity, writing in all innocence about the barbarous society in which they lived because that was all they knew. Their work took on a new, moral quality: that of Truth. However distasteful Jane Eyre, Wuthering Heights or The Tenant of Wildfell Hall might be, they were simply an accurate representation of provincial life. A bizarre offshoot of this argument is the belief that every one of the Brontes' fictional creations must have had its counterpart in reality. The search for originals of the places, characters and incidents in the Brontes' novels is as fanatical as it is irrelevant.

Similarly, by a peculiar inversion of the normal process, literalists argue the facts of the Brontes' lives from their fiction, which they persist in regarding as autobiographical. It is not surprising that the myths survive.

The astonishing fact is that there is a wealth of material available to the biographer, which has never before been used. No one has ever looked through the local newspapers, for instance, even though this is a basic source for the historian. Two years spent reading contemporary papers in local archives may have addled my brain but it has also provided an unexpectedly large haul of information, which should, once and for all, scotch the myth that Haworth was a remote and obscure village where nothing ever happened. It was a township, a small, industrial town in the heart of a much larger chapelry, where politics and religion were hotly disputed and culture thrived. As a leading figure in Haworth, whose activities were constantly recorded and whose letters were regularly published, Patrick emerges as a tireless campaigner and reformer, a man of liberal beliefs rather than the rampant Tory he is so often labeled. The rest of his family, brought into the public domain by Mrs. Gaskell's Life of Charlotte Bronte, were the subject of letters and reports by their friends and acquaintances, many of which contradict Mrs. Gaskell's wilder flights of fancy from first-hand experience.

The Brontes have been ill-served by their biographers. Vast numbers of their letters, poems, stories, drawings, books and personal memorabilia have been preserved, though they are scattered throughout libraries and private collections in the United Kingdom and the United States. This is inconvenient. Many of the manuscripts are themselves divided and housed in different collections; they are often written in the Brontes' minute and cramped hand, which requires patience and good eyesight to decipher. This is even more inconvenient. But it is inexcusable that, almost without exception, the Brontes' biographers have preferred to do their research in the bowdlerized and inadequate texts, which are all that are currently available in print. Where no published edition exists, that body of information has been virtually ignored. This is true of the bulk of Branwell's juvenilia and of Charlotte and Emily's French essays, leading to sweeping and highly inaccurate statements about their content. Even Charlotte's letters, though more readily accessible in manuscript, are quoted from the Shakespeare Head Bronte, which was compiled by the notorious forger, Thomas J. Wise, and his sidekick, J. A. Symington. Any derogatory remarks, which did not live up to their idealized and sanitized image of Charlotte, were simply omitted; passages difficult to read were also omitted or carelessly transcribed.

Margaret Smith's forthcoming monumental edition of Charlotte's letters will rectify all this but, for the moment, the conscientious biographer must rely on the manuscripts.

I have made it a point of honor to go back to the original manuscripts of all my material wherever possible, quoting them in preference to printed versions. Much of my material is therefore published here for the first time, including not only letters but also juvenilia, poetry and French essays. I have not followed the usual editorial practice of correcting the Brontes' appalling spelling and punctuation. Though this can make for difficult reading on occasion, I hope that the reader will appreciate that this is done to ensure that he or she can get as close as possible to the original. Correction is not just an interference with the Brontes' own words: it creates a very misleading impression of the sophistication of their writing, particularly when they were children.

I sincerely hope that this biography will sweep away the many myths, which have clung to the Brontes for so long. They are no longer necessary. Unlike their contemporaries, we can value their work without being out- raged or even surprised by the directness of the language and the brutality of the characters. It is surely time to take a fresh look at the Brontes' lives and recognize them for who and what they really were. When this is done, I believe, their achievements will shine brighter than ever before. For Patrick and Branwell, in particular, the time is long overdue. With due humility, I echo the words of Charlotte Bronte: 'This notice has been written, because I felt it a sacred duty to wipe the dust off their gravestones, and leave their dear names free from soil.'