Accessibility links
Be Good NPR coverage of Be Good: How to Navigate the Ethics of Everything by Randy Cohen. News, author interviews, critics' picks and more.

How to Navigate the Ethics of Everything

Be Good collects the author's favorite questions and answers from his tenure as the author of the New York Times column "The Ethicist," presenting evidence that sensible people disagree on the definition of ethical behavior.

NPR stories about Be Good 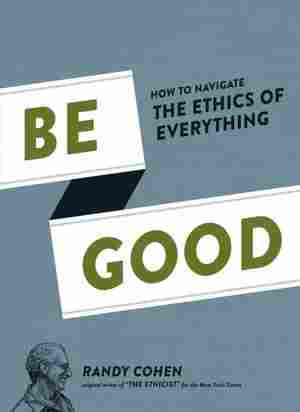 'The Ethicist' Explains How To 'Be Good'

August 21, 2012 • Have you ever boarded a train seeking a little quiet reading time only to be disrupted by the incessant cellphone chatter of a fellow passenger? What to do? Randy Cohen, The New York Times Magazine's original ethicist, explains "the ethics of everything" in his new book, Be Good.

'The Ethicist' Explains How To 'Be Good'

As a friend and I left a museum, we spontaneously offered our stubs to a couple waiting to buy tickets so they could enter without paying. They seemed bewildered and reluctant to accept. Our motivation was not to cheat the museum but to give two random strangers an unexpected and pleasant surprise. Some of our friends think we shouldn't help anyone avoid paying the admission charge. What is your opinion?

When a friend and I broke into a Harley-Davidson showroom and handed out motorcycles to passersby, our motive was not to harm the dealer but, like you, only to perform an act of kindness for bewildered strangers. Or that would have been the motive had we actually done this.

Despite your benign intentions, what you call a "pleasant surprise," a less puckish person — me, for instance — could call "helping a couple of tourists cheat their way into the museum." And if they get caught and are tossed out into the gutter, they'll have one of those kooky "only in New York" anecdotes to tell their friends. They'll always remember your kindness.

Some argue that no museum should charge admission, certainly no museum that receives public funds. To do so puts an essential experi­ence of civilized life out of reach of many families. Even when one can afford the admissions fee, the experience is transformed from a rou­tine pleasure to a special event. Indeed, for many years New York's museums, like its libraries and parks, were free to all. In Washington, DC, the Smithsonian's museums on the Mall still charge no admission. However, what you and your friend were doing was not protesting the museum's ticket policy; it was an impromptu — if unintended — inducement to chicanery.

If you want to give someone a gift, you must pay for it yourself; so take out your wallet and buy a couple of passes. Or give a random stranger money95 one of those Vermeer note cards, or a Vermeer T-shirt, or Vermeer pants; I know people are just nuts about Vermeer. And about pants.

You are each responsible for half the bill. How your friend got the money to cover his end is beside the point, whether he earned it as a job perk, inherited it from a long-lost relative, or got it by dancing on the sushi bar and encouraging patrons to toss coins (assuming he didn't run afoul of the health code or the estate of Bob Fosse). Further, you could argue that it is his employer's understanding that this reimbursement is to feed himself, not his pal.

Flying from San Francisco to White Plains on business, I was involuntarily bumped from my flight, rebooked twenty-four hours later and, after lengthy negotiation, given $800, about $100 more than the cost of my ticket — there is a formula for such things — as compensation. Who gets the $800, me or the client who paid my travel expenses?

You. The airline compensated you for your hassle; it did not waive the cost of your ticket. That remained what it always was and must be reimbursed by the client. If you'd played a hypothetical in-flight scratch ticket — airlines are eager to find new sources of revenue — and hit, that money would be yours, too. Think of it this way: you won an annoying and inconvenient lottery.

UPDATE: This traveler kept the money, likening it to a gift from the airline. He informed the contractor who got him the job, who was okay with it, but the contractor did not inform the client.

Louis Vuitton, etc. — just the nice generic ones. They're so much cheaper than in the stores. Must I stop?

You are right to shun counterfeit handbags, but you may buy knock­offs, which are not the same thing. A knockoff apes the appearance of the original but does not represent itself as other than it is. It is not built around fraud (and probably not skillfully hand-stitched fine leather either). Nor does a knockoff run afoul of trademark law. Draw­ing on other people's work — in fashion, in art, in literature — is how ideas spread through the culture. (Is Eric Clapton a knockoff Robert Johnson? Is that a bad thing? Would absorbing the styles of three or four additional guitar greats make him more virtuous?) If absolute originality were the summumbonum, how would we get along without network television?

More potent arguments could be made against unlicensed street vendors — their sometimes lighthearted attitude toward paying taxes, your difficulty getting a refund from a merchant who is vigorously nomadic — but neither these nor your fear for the well-being of Louis Vuitton compels you to eschew them.