Geoffrey Nunberg's new book presents a history of the word "asshole" — from its use by World War II servicemen to express frustration at arrogant superiors to its first use in print by Norman Mailer to George W. Bush's use of the word to describe a journalist.

NPR stories about Ascent of the A-Word 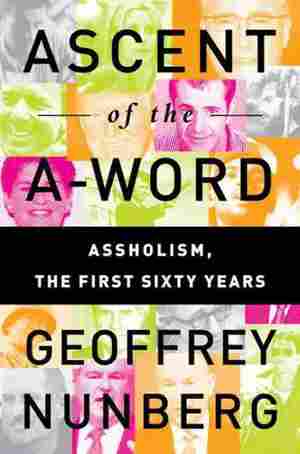 August 29, 2012 • In his new book, Ascent of the A-Word, linguist Geoffrey Nunberg looks at how the term took root among griping World War II GIs — and how its meaning evolved in the '60s and '70s. He tells Fresh Air that crude words are "wonderfully revealing."

Excerpt: Ascent Of The A-Word

The idea that asshole could be a proxy for the fraying fabric of public life first struck me in 2005, just before things got really squirrelly. I was writing about the language of politics and listening to a lot of right-wing talk on radio and TV and I kept noticing how everything seemed to be aimed at depicting liberals as, well, assholes. Not that anyone ever actually says assholes on the air on the programs, bleeped or not.* But that isn't the point; it's rather that asshole seems to encapsulate the animus the shows are both stoking and stroking. It's a word we reserve for members of our own tribe: the boss who takes credit for your work, the neighbors who get on your case for putting out your garbage the night before, or maybe a well-known politician or celebrity. It isn't a word you'd use of Abu Musab al-Zarqawi. It signals indignation, with an undercurrent of contempt, an emotion you can only feel towards those you feel both superior to and familiar with. And that feeling in turn legitimates a certain energizing response — combative, derisory, with more than a splash of asshole itself — that's compelling enough to keep listeners tuned in, which is after all the aim of the exercise. Or if the listeners are of an opposing political viewpoint, as many of them are, they can enjoy a rush of head-clearing rage at the hosts' assholistic harangues. Assholes are people who allow us to be assholes back at them. They turn us into anti-assholes, a word I think of as being less like antitoxin than antimatter — stuff just like matter but of an opposite charge, which reacts with matter violently.

A huge amount of this programming is aimed at creating exchanges and narratives that generate these feelings by turning reports about remote evils into pretexts for stirring up more intimate antipathies. During the buildup to the Iraq war, more than half the Fox News segments on Iraq focused on the pusillanimity of the French, who were refusing to go along with the invasion, and through them, on the pretentious American Francophile liberals who spoke their language and consumed their wines and cheese. (The Germans, who were no less adamantly opposed to the invasion, got a pass.) Saddam Hussein may have been an oriental despot out of central casting, but he was too alien to be the object of the contempt that only familiarity can breed.

Not that conservatives always had to manufacture such pretexts. You can't live in San Francisco and teach at Berkeley, as I do, without being impressed by the myriad forms of assholism that bourgeois liberals nourish: the pretension and superiority, the preciosity, the way laudable commitments to social justice sit cheek by jowl with intrusive paternalism. (Berkeley has always been a place where people believe that consenting adults should be allowed to do whatever they please in the privacy of their bedroom so long as they don't try to smoke afterwards.) The truth is that the dynamic I'm interested in here — the play of asshole and anti-asshole — is fed by the abundant strains of assholism that run through every corner of American life. What struck me in 2005 was the way the play of asshole and anti-asshole was bubbling up into the public sphere, like a sadistic form of performance art or a snarky sitcom.

That was seven years ago, in what in retrospect seems almost an idyllic age of comity, before public discourse started to go completely off the rails. The most dramatic shift was among the partisans of the right, who discovered after Barack

Obama's election just how gratifying it could be to act like an asshole when you could tell yourself you had a sufficient provocation and were unencumbered by the responsibilities of government. In an emblematic case, the first-term South

Carolina congressman Joe Wilson interrupted a presidential speech on the health care bill to call out, "You lie!" The conduct was deemed unbecoming by his own party's leadership — "totally disrespectful," said John McCain — and Wilson initially apologized and said he had let his emotions get the better of him. But radio hosts celebrated his "guts" and "backbone" and said he had no need to apologize for simply articulating what millions of Americans were saying. Supporters flooded Wilson with campaign contributions, and a bit more alarmingly, a South Carolina gun dealer offered a limited edition component for the AR-15 with "You Lie" etched on the stock, as if acting like an asshole provided incontrovertible proof of patriotic zeal.

This didn't come out of nowhere. Fifty years ago, the historian and traditionalist conservative Peter Viereck, recalling the humanism of Burke and Adams, wrote that modern conservatism was diffusing a mood of emotional freeze, making people "ashamed of generous social impulses." And in modern times, the right has always been susceptible to making an exhibition of its hardheartedness, just as the left has had a regrettable penchant for self-congratulatory pietism. But lately the tone of those displays has become more intense and operatic, as witness the striking series of outbursts during the debates among Republican presidential hopefuls in 2011–2012. A debate audience applauded when Brian Williams began a question to Governor Rick Perry by noting that Texas has conducted a record 234 executions during his term as governor, then booed Perry himself when he defended a Texas program providing in-state college tuition to the children of undocumented immigrants. (In his defense, Perry said, "If you say that we should not educate children who have come into our state . . . by no fault of their own, I don't think you have a heart" — a remark that so angered right-wing voters that Perry was placed in the situation, surely unprecedented in American politics, of having to apologize for using the "inappropriate" word heart.) In another debate, the audience booed a gay soldier serving in Iraq who asked in a clip what Rick Santorum would do about "Don't Ask, Don't Tell." A debate audience cheered Herman Cain's assertion that "if you don't have a job and you're not rich, blame yourself." And at a CNN–Tea Party debate, Wolf Blitzer asked Ron Paul what should happen to a person who lacks health insurance and falls into a coma. "Are you saying that society should just let him die?" Blitzer asked, at which point several people yelled, "Yeah!" and others cheered. By early 2012, a South Carolina debate audience was moved to boo Paul when he said that other countries didn't like being bombed any more than we would, adding, "I would say that maybe we ought to consider a Golden Rule in foreign policy." The audience's reservations about Paul's proposal may have been soundly rooted in Realpolitik, but even so it was a theologically awkward moment. If you took those effusions at face value, they seemed to confirm the continued relevance of Viereck's observation that among a slice of modern conservatives, it's cool to be cruel.

It's misleading to judge any group by its most demonstrative adherents. Wilson was plainly out of line even by the standards of his caucus, and the audiences at primary season debates — candidates' supporters provided with tickets by the campaigns and urged by the producers to be demonstrative — were clearly more vociferous than the typical adherent of the Tea Party right, the conservative movement, or the Republican Party in general. Still, the groundswell of support for the outbursts suggests that these attitudes are widespread. And yet these people are neither demented extremists nor political neophytes: they're people who were mad at Gore, mad at Clinton, mad at Carter. This isn't a new constituency in American politics, just an old one steamed over. So what has gotten into them? People point to race as a motivation, and there's clearly something to that: it's sobering how many of the online comments about Obama and the Democrats at conservative sites manage to work in references to affirmative action, watermelons, Chicago thugs, and Kenya. But few deserve the labels of "terrorists" or "crazies" that critics on the left have thrown at them, and notwithstanding the occasional demonstrator holding a sign that depicts Obama as a witch doctor with a bone through his nose, the majority weren't driven to their participation by virulent racist attitudes. Indeed, you have the sense that a fair amount of their race talk is just the collateral effect of a free-floating outrage that will seize opportunistically on any inimical attribute that comes to hand. When it comes to the crunch, there isn't that much difference in tone between their vilifications of the Muslim Kenyan socialist America-hating Barack Hussein Obama for being so exceedingly Other and their vilifications of Bill Clinton for being so exceedingly anything but, as web comments indicate:

That intensified tone of vituperation isn't the direct result of a shift to more hardline political attitudes. Not that there hasn't been one, but it itself is largely the outgrowth of a change in political style.

*To my knowledge, the word has been used only once on Fox News, by an AFLCIO economist who lost it with the host Neil Cavuto when Cavuto asked him if he had gotten his degree at a baking school — which to be sure really was kind of an asshole thing to say.