How the Disability Rights Revolution Saved My Sanity

Miracle Boy Grows Up describes how the author, an NPR commentator and professional writer who was born with spinal muscular atrophy, was expected to die in childhood but who with the support of a growing disability rights movement became one of the first students in a wheelchair to attend Harvard. 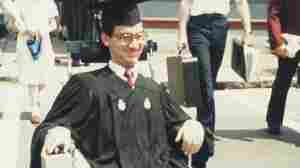 August 31, 2012 • Ben Mattlin was born with a condition called spinal muscular atrophy. Many infants with the disease don't live past age 2, but Mattlin went on to attend Harvard, get married and have kids. "I had this dumb idea from childhood that I could do anything anybody else could do," he says.

My new attendant's first day starts with basic training: how to wash me ("first the soap ... "), dress me ("slide one foot into the jeans leg, then the other ... "), and lift me from bed into my wheelchair ("put one hand under my knees and the other behind my back and lift me like a groom carries a bride over the threshold ... ").

A UCLA student from Ghana, Africa, Jerry had answered my classified ad in the Daily Bruin, the university newspaper, for a morning attendant. The Bruin is my latest favorite attendant source. Its circulation spans the local community, and its classifieds supply staff to many nearby restaurants and doctors' offices. Something about being just another area employer appeals to me.

Since my last attendant quit several months ago — the group home for retarded adults, his other job, demanded more of him — I've been eager to find a replacement but didn't want to be too hasty either. I know the right guy can improve my mood, my productivity, my family's quality of life. I don't know why attendants have this power over me. Doubtless it has to do with their being such a constant presence, to the extent that they function as my arms and legs. Perhaps it's also because they always used to be older than I am; I saw them as surrogate big brothers or even fathers. Now that I'm nearly forty-four, I should be in the daddy role. I should have more natural authority. Maybe it'll go better from now on.

My first impression of Jerry was the proper résumé he'd e-mailed, which is unheard of in this line of work. He'd then arrived on time for his interview, neatly shutting the door behind him, which I always watch for as a sign of not just tidiness but a sense of personal responsibility. He'd proffered a hand, and I as usual said something like "can't reach you, but I'm pleased to meet you." He'd calmly proceeded to lower himself onto our sofa, pushing up his glasses and pulling up his loose-fitting, low-slung jeans.

I always try to imagine how it will be seeing this person early in the morning, when I'm not awake enough to want to see anybody. Jerry looked scruffy — long dreadlocky hair and a ragged beard of sorts, like many young men these days.

"How are you today?" he'd asked, presenting a typed list of references, which is impressive in itself. "And what would you like to know about me?"

No obvious accent, which reassured me there's a fair chance of good verbal communication. For me that's essential, since I can't point or otherwise demonstrate physically what I need.

Jerry has just transferred to UCLA. He's twenty-five and on a student visa. He works evenings with troubled high school kids. He likes helping people — his goal is to get a good education and go back to his country to help institute social reforms and keep the peace — but has never worked with disabled people or in any kind of medical setting.

That's the way I like it. I don't want to be called "the patient." Those with any kind of background in the field tend to think they know what's best for me. They don't. Not all of us who ride in wheelchairs are the same.

"Your ad said 'will train,' and I like that," he'd said next, smiling. "When you say you need me to shave you, for example, you can explain how?"

I told him I'd check his references and be back in touch shortly. It may sound like a dodge, but I always check references. In the past, I've uncovered all kinds of unforgivable dirt. His turned out to be stellar. A few days later I offered him the position — two hours every weekday. That's all I could afford at the moment.

After a successful first day, while tying my shoes, Jerry asks a question that's dangerously close to my tolerance boundary: "How do you stay so positive?"

It's just baby steps from calling me inspirational. Which I'm used to, of course, but still. "I don't, and I'm not," I answer. "Just doing what I gotta do."

The next day he again comments on how much he enjoys my "positivity" and wonders what keeps me going.

"There's so much anger out there," he goes on, undeterred. "I work with high school kids who have trouble functioning because they're so filled with anger. You don't get angry?"

"Sure. Wait till you know me longer."

Gradually, it sinks through my self-righteous emotional shield, burnished by the disability-rights movement to rebuff all but the most specific forms of praise. There's something different about what he's saying. My earnest young employee is commenting not about something over which I've no control — the fact that I've lived my whole life with a severe neuromuscular condition — but about my attitude, an attitude I've adopted and nurtured, a doggedly honed personality trait, a survival strategy, perhaps. He might've asked the same question if I didn't have a disability!

How have you survived this sometimes rough world?

I could've asked him the same question. An immigrant from a poor country, working his way through school, dedicated to helping others. What drives him? (Another odd realization: This time the attendant is inspiring me!)

Usually the "you're so inspirational" business is followed by something like, "You should write a book about your life. It would be so inspirational for so many people! Then you could go on Oprah!" Which turns me off. Nothing against Oprah, but let survivors of abuse, cancer, or war coax tears from readers' eyes. Not me.

Yet Jerry doesn't resort to the book-and-Oprah spiel. Not exactly. What he does do, that morning and for many others that follow, is get me talking. And that's when I realize something. I do have a lot to say. And I do have a personal history that's not the same as everybody else's. It's a story of luck and persistence, by turns ordinary and extraordinary. And, upon further reflection, I come to see how closely my story tracks a surge of unprecedented advances in medicine, technology, and civil rights that people with disabilities have enjoyed and harnessed. Indeed, the synchronicity between that movement and my own is surely more than coincidental.

Maybe it's my age. There comes a point when you get too old to care what other people think. Perhaps I've at last reached a level of maturity from where I can look back at my varied experiences with unself-conscious honesty and feel nothing but humbled and grateful.

And if it happens to inspire people, that's their problem!