The City and the Coming Climate

The City and the Coming Climate

Climate Change in the Places We Live

Title
The City and the Coming Climate
Subtitle
Climate Change in the Places We Live
Author
Brian Stone, Jr.

"In the first decade of this century, for the first time in history, the majority of the planet's population resided in cities. We are an urban planet. If ongoing changes in climate are to have an impact on the human species, most of these impacts will play out in cities. This fact was brought into full relief in the summer of 2003, when more than 70,000 residents of Europe perished in one of the most prolonged and intense heat waves in human history. The final death toll would exceed that associated with any Western European or American conflict since World War II, or any other natural disaster to have ever struck a region of the developed world, and the vast majority of these deaths occurred in cities. Studies in the aftermath of the heat wave would show that not only had global warming increased the likelihood of such an extreme event, but that the intensity of the heat had been greatly enhanced by the physical design of the cities themselves, exposing residents of cities to a much greater risk of illness or death than others. This book is the first to explore the dramatic amplification of global warming underway in cities and the range of actions that can be taken to slow the pace of warming. A core thesis of the book is that the principal strategy advocated by the global science community to mitigate climate change - the reduction of greenhouse gases - will not prove sufficient to measurably slow the rapid pace of warming in cities"—

NPR stories about The City and the Coming Climate 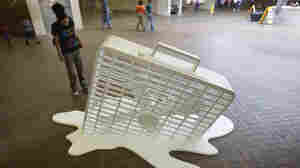 An art installation of a melting fan sits on display in a subway station Thursday, June 9, 2011, in Atlanta. David Goldman/AP hide caption

September 4, 2012 • More than 20,000 high-temperature records have been broken so far this year in the United States. It's especially bad in urban areas, where cities are heating up about twice as fast as the rest of the planet. But a researcher in Atlanta is using the heat wave as an opportunity to do something about the warming planet.