Christian Identity in a Multi-Faith World

Title
Why Did Jesus, Moses, the Buddha, and Mohammed Cross the Road?
Subtitle
Christian Identity in a Multi-Faith World
Author
Brian D. McLaren

Brian D. McLaren's book discusses the importance of interfaith relations and of reclaiming benevolence, suggesting that understanding religious doctrines and learning about Christian and colonial history can instill within Christians empathy and humility.

NPR stories about Why Did Jesus, Moses, the Buddha, and Mohammed Cross the Road? 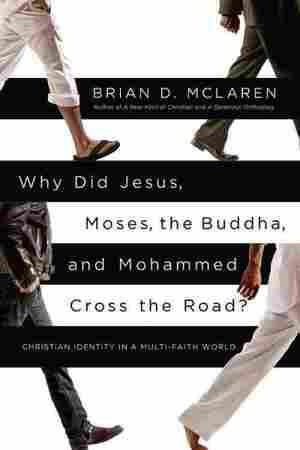 September 15, 2012 • In Why Did Jesus, Moses, the Buddha, and Mohammed Cross the Road?, Pastor Brian McLaren explores the tension between religions and attempts to imagine a conversation between the most important figures in Western theology.

Excerpt: Why Did Jesus, Moses, The Buddha, And Mohammed Cross The Road?

The Scene of a Thousand Jokes

Laughter is one of the ways we cope with the discrepancies of our lives. There is a dream we all have for this world, and then there is, well, this world. There are expectations we have of our religions, and then there are our religions... . Our capacity to love God, ourselves, people, and all of life grows with our capacity to laugh. We are ridiculous, and not to laugh at our religions, our worldviews, and our philosophies (that is, ourselves), would be a false witness. ... This ability to laugh in the midst of our imperfections in the presence of God is what we call grace.

Why did Jesus, Moses, the Buddha, and Mohammed cross the road?

The question, of course, recalls an old riddle about a chicken. The riddle goes back at least to 1847 when it appeared in a New York magazine. By the 1890s, the joke was so well-known that it was generating riffs and variations on the theme.

The original riddle exemplifies "anti-humor" — a joke that is funny because it isn't funny. Anti-humor works by setting up a convention that leads us to expect a joke, and then reverses that expectation in a humorous way. In the nearly countless "Chicken-Joke 2.0" riffs and variations being hatched around the world, jokesters build humor upon the anti-humor, like this:

Why did the chicken cross the road?

ALBERT EINSTEIN: Did the chicken really cross the road, or did the road move beneath the chicken?

SIR ISAAC NEWTON: Chickens at rest tend to stay at rest. Chickens in motion tend to cross the road.

HAMLET: That is not the question.

DONNE: It crosseth for thee.

COLONEL SANDERS: Did I miss one?

So, why is it funny to ask about Jesus, Moses, the Buddha, and Mohammed crossing the road? Before looking for a punch line, just for fun try to imagine the scene: four of history's greatest religious leaders ... not fighting, not arguing, not damning, and condemning one another, not launching crusades or jihads, but walking together, moving together, leading together. Doesn't that already reverse some of our expectations? And doesn't that reversal expose our unspoken expectation — that different religions are inherently and unchangeably incompatible, disharmonious, fractious, and hostile toward one another?

The image of the four men crossing a road also surprises and interests us because it puts the four in a similar situation, in a common predicament. Whatever the answer will be, it will be the same for all of them, perhaps even rendering them companions rather than competitors. That possibility makes claims on all of us who follow them.

If you're a Christian like me, of whatever sort — Catholic, Protestant, or Eastern Orthodox; conservative, liberal, or moderate; traditional or whatever — if you love Jesus, if you know and have confidence in him as Lord, Savior, Son of God, Son of Man, God incarnate, Word made flesh, and more, let me ask you to seriously consider this: how do you think Jesus would treat Moses, Mohammed, and Siddhartha Gautama (the Buddha) if they took a walk across a road together?

Would Jesus push Moses aside and demand to cross first, claiming that his ancestor's failed religion had been forever superseded by his own? Would he trade insults with Mohammed, claiming his crusaders could whup Mohammed's jihadists any day of the week, demanding that Mohammed cross behind, not beside him? Would Jesus demand the Buddha kneel at his feet and demonstrate submission before letting him cross? Or would he walk with them and, once on the other side, welcome each to a table of fellowship, not demanding any special status or privileges, maybe even taking the role of a servant — hanging up their coats, getting them something to eat and drink, making sure each felt welcome, safe, and at home?

If his three counterparts reached out their hands in friendship, it's pretty hard to imagine that "the friend of sinners" would cross his arms or turn his back, refusing to reciprocate. It's much more likely he would embrace them with open arms and without hesitation, proving himself over time to be the best friend they ever had. It's pretty hard to imagine Jesus cursing or "smiting" them, but entirely natural to imagine him blessing them and "doing unto others" as he would want them to do for him. I have no doubt that Jesus would actually practice the neighborliness he preached rather than following our example of religious supremacy, hostility, fear, isolation, misinformation, exclusion, or demonization.

After all, according to the four Gospels, Jesus had extraordinary insight into human character. He saw value where others saw only flaws. He saw the love of a sinful woman who anointed his feet with tears at a banquet, the spiritual thirst of an oft- married woman at a well in Samaria, the big seed of hope in a little chap named Zaccheus, the undeniable faith of a Syrophoenician mother, the flinty strength of loudmouth Peter, and the deep and spunky wisdom of Mary of Bethany. With that track record in mind, we can only imagine what he would see in Mohammed, Moses, or the Buddha, not to mention Confucius, Lao Tsu, Nanak, or Wovoka.

It seems ridiculous to imagine that he would be insecure among them, considering them his rivals, or that he would find it necessary to extract from them explicit agreement on fundamental doctrines before condescending to cross a road with them. It's unthinkable, if one of them came to confer with him by night like Nicodemus, or in broad daylight like the rich young ruler, that he would intimidate them, threaten them, call down fire upon them, patronize them, or humiliate them. Maybe his followers would pull out a sword and slash off their ears, or herd them and their followers into ghettoes, concentration camps, or reservations where their influence could be limited. But never Jesus. Never.

And if you know anything about Mohammed, Moses, and the Buddha, how do you think they would approach Jesus, and one another, if they encountered one another along the road? Is it a joke to think they would respect one another and be drawn toward one another as friends, allies, collaborators? Isn't it more ridiculous to imagine any other outcome? I can't help but think of recent scenes of Archbishop Desmond Tutu and the Dalai Lama, a Christian and a Buddhist, almost giddy in their friendship and mutual regard.

Walking into a bar, of course, is the scene of even more jokes than crossing a road. So we might expect a chuckle as Mohammed orders a Wahabi cocktail — a mixed drink of warm milk, sugar, and hot tea (since alcohol is officially forbidden to Muslims, and the Wahabis are known for their strictness on such matters). We might expect a smile as the Buddha makes a sage comment about the mindful breaking of the Fifth Precept, after which he orders a mojito, then makes a toast "to moderation in all things, including following the Fifth Precept." And perhaps there would be outright laughter if Moses were to part his margarita and Jesus were to order water and then, with a wink, turn it into a fine Stellenbosch pinotage.

Like the road waiting to be crossed, the bar is quintessential comedic space, indeed. It is also prime secular space, a place for the imbibing of spirits rather than Spirit. It's the place of profanity, not sacredness; levity, not liturgy; and relaxation, not reverence, right? What could the pub possibly have in common with the narthex?