An Exotic History of Tea, Drugs, and Money in the Age of Sail

Eric Jay Dolin traces the history of the relationship between America and China back to its earliest days, when the United States traded with China for furs, opium and rare sea cucumbers, but left an ecological and human rights disaster that still reverberates today. 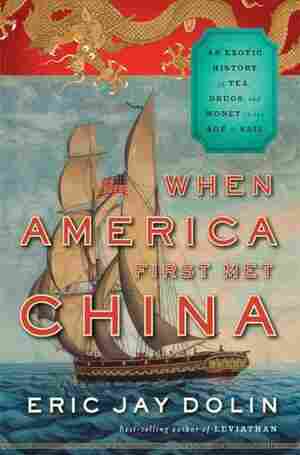 September 30, 2012 • From pirates to tea to opium, Eric Jay Dolin's new book, When America First Met China, describes the long and complicated history of the trade relationship between the two countries.

"The Adventurous Pursuits of Commerce"

Soon after the Treaty of Paris was signed on September 3, 1783, officially ending the American Revolution, the former colonies were hit by one of the worst winters in recent memory. From Maine to Virginia the temperature plummeted in mid-November, and for the remainder of the year the region was battered by a string of powerful storms, some dumping nearly two feet of snow. Ice, at first appearing as a thin glaze at the edges of harbors and riverbanks, spread, swallowing open water at a quickening pace. Two brief but intense thaws in January melted the snow and set ice floes in motion, but at the end of the month winter clamped down again and there was nothing John Green could do except wait. As captain of the Empress of China, Green had wanted to sail out of New York in early February, but ice in the East River and the harbor beyond barred his way. The situation worsened as the mercury dipped below zero for days on end. Finally the temperature rebounded, causing the ice to retreat, and on Sunday, February 22, as the sun rose in the brilliant blue sky and gentle winds rippled the surface of water, it was time to get under way. The Empress of China cleared the wharf, and Green and his forty-two-man crew began their groundbreaking voyage, thus launching America's trade with China.

At the same time another ship, the Edward, also headed down the East River, bound for London with the "Public dispatches of Congress, for the respective courts, containing the definitive articles of peace." The coincidental sailing of these two ships provides a historical juxtaposition that could have been conjured by a novelist. While the Edward was delivering what could arguably be called the birth certificate of the United States, proclaiming the arrival of the newest nation, the Empress of China was making a very important statement of its own, announcing to the world that this new nation was ready to compete in the international arena. The symbolism didn't end there. Even the date of departure provided its own dramatic flourish, for February 22 was George Washington's fifty-second birthday. Although that, too, was just a coincidence, it was particularly fitting that the infant nation's first foray to the Far East should have commenced on the birthday of the man who had done more to found the United States than any other person. Washington couldn't have asked for a better omen than the departure of these two ships, which embodied the hope for America's future.

The Empress of China's voyage was borne on the twin pillars of necessity and opportunity. With the signing of the Treaty of Paris, one trial had ended and another had begun. America had broken free of the constrictive political and economic bonds of Great Britain, and the Americans who had fought so long and hard for this day basked in the warm afterglow of freedom and possibility. They were subjects no more. A toast raised in Charleston, South Carolina, on July 4, 1783, after the preliminary articles of peace had been ratified by the Continental Congress, captured the jubilant mood of the country: "To this glorious day, by which we secured, among the powers of the earth, the separate and equal station, to which the laws of nature and of nature's God entitle us." At the same time, however, this freedom came at a terrible cost. The nation was mired in an economic depression, much of its commerce hobbled, its central government in disarray, and the states were squabbling with one another over their powers and responsibilities. Given all this, it was not uncommon for Americans to wonder how their country would make its way in the world.

Many enterprising merchants, who had profited handsomely during the war and still had ships and resources at their disposal, believed that the answer lay overseas, but with whom would they trade? The Revolution had severed the formal union between the colonies and Great Britain, and cast asunder the long-standing mercantile connections between the two. The British government, viewing the United States as a potentially dangerous competitor, cut off virtually all American trade with the British West Indies, which had been one of the main arteries of colonial commerce prior to the Revolution. At the same time it was becoming clear that America was going to face trade barriers from other European nations intent on protecting their own commercial interests. Confronted with this increasingly hostile landscape, the United States needed not only to establish improved trading relationships with European powers but also develop new ties with other countries in order to ensure its economic future. To that end China presented a tantalizing opportunity.

In the decades leading up to the Revolution, Americans had obtained the Chinese goods they desired — including porcelain, silk, tea, and a rough, sturdy cotton fabric called nankeen — from British merchants or from smugglers who brought the goods to America's shores. One thing that the Americans couldn't do, however, was trade directly with China. The only entity in the British Empire allowed to do so was the monopolistic British East India Company, which had been established in 1600. Since America was no longer part of the empire, its merchants were now free to go to China. Leading the way was Robert Morris.

Born in Liverpool in 1734, Morris remained in England until the age of thirteen, when he came to America to join his father, a tobacco merchant who had settled Oxford, Maryland, on the eastern shore of Chesapeake Bay. An industrious boy with an inquisitive mind, Morris quickly outgrew the narrow confines of Oxford, and two years after he arrived his father sent him to Philadelphia, already a cosmopolitan metropolis of twenty thousand people, the largest British city on the continent. After a brief tenure as a librarian, Morris began clerking at the shipping firm of Charles Willing. Morris swiftly rose through the ranks and became fast friends with Willing's eldest son, Thomas, who also worked at the firm and was being groomed to lead it one day.

When Mr. Willing died in 1754, Thomas took over the firm, and installed Morris as his trusted lieutenant, soon elevating him to partner in the firm of Willing, Morris & Company. Willing, whose friends called him "Old Square Toes" on account of his serious demeanor and conservative nature, chose wisely in selecting Morris. Together they built Willing, Morris & Company into one of the premier merchant houses in America. By the early 1770s Morris had married, started his own family, and was firmly ensconced at the pinnacle of Philadelphia society.

During the Revolution, Morris pursued two paths, one public and the other private. As a delegate to the Continental Congress, he favored negotiating with Britain, and would not sign the Declaration of Independence until August 2, 1776. In so doing he affirmed his unreserved support for the cause, purportedly declaring, "I am not one of those politicians that run testy when my own plans are not adopted. I think it is the duty of a good citizen to follow when he cannot lead." When the Continental Congress needed someone to curtail government spending, reduce public debt, coordinate foreign loans, and breathe life into America's woefully underfunded war effort, it tapped Morris. As a member of Congress and as superintendent of finance, Morris established the first national bank and did the fiscal equivalent of spinning straw into gold. Time and again Morris drew upon his financial acumen, his connections, his negotiating talent, and his own fortune to pull together money and materials, the twin fuels without which the war could not be waged. At Valley Forge and Yorktown, when George Washington needed infusions of cash and supplies to keep his troops from literally walking off the job and bringing the war effort to a grinding halt, Morris spearheaded the effort to provide these essential items.

Morris also served as the agent of the marine, to develop what he called "our infant and unfortunate navy." It was a sensible choice. Morris had the requisite background, having been heavily involved in maritime trade before the war through his fleet of merchantmen, and he applied his financial skills to get the bankrupt navy on an even keel.

In and out of government, Morris, "the Financier of the Revolution," also attended to his private business, for however ardent a patriot he was, he was equally committed to making money. Morris expanded his trading empire, outfitting privateers to plunder British shipping. Although many regarded Morris as a profiteer as a result of his wartime business activities, the latter "elevated him to a position where he was acknowledged as the most prominent merchant in America."

As the Revolution wound to a close, Morris began withdrawing from public service and turned more of his attention to his business affairs. One of the investment prospects foremost on his mind was the China trade. In 1780 two of Morris's business associates, the New Yorker William Duer and the French consul in Philadelphia, John Holker, tried to entice him to fund a trading voyage to China, but Morris declined, arguing that the resources necessary to mount such an expedition were not available. The next year Holker approached Morris again, with the same result. But by mid-1783, as peace finally hove into view, Morris was nearly ready.