Title
Luck or Something Like It
Author
Kenny Rogers

The country music legend shares the story behind his meteoric rise to fame, including the highs and lows, and the secrets behind his biggest hits. 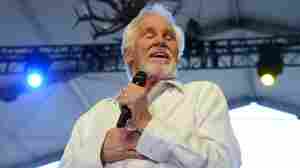 October 8, 2012 • Rogers has two dozen No. 1 songs to his name, but rarely writes for himself. In the new memoir Luck or Something Like It, he explains how careful curation has helped his career last.

Chapter One: A Pair to Draw To

That sound still rings in my ears when I think of my mom. Like most kids, I could usually count on being in trouble when my mom used both my names together like that. So I ask you: Why would a mother yell this name at her son all his life, after signing a document that says his name was Kenneth Donald? I ask because I actually saw the birth certificate with my mom's and dad's signatures, which I recognized as theirs, with the name Kenneth Donald on it, and I had never, ever heard anyone in my family call me by that name. It was always Kenneth Ray.

I was born on August 21, 1938, at St. Joseph's Infirmary in Houston, Texas, the fourth child of Edward Floyd and Lucille Lois Hester Rogers. I am told that I have Irish and Native American heritage, and I always assumed that my Native American blood came from my grandmother Della Rogers, with her high cheekbones and her once dark black hair that she pulled back in a severe bun in her later years. Whether it was Grandmother Della or someone else, I can't say for sure, but I just took it for granted that I was part Irish, part Indian, and that was that.

I grew up in the San Felipe Courts housing projects of Houston's Fourth Ward. San Felipe Courts, which was later renamed Allen Parkway Village, was built by the city of Houston in the early 1940s. San Felipe Courts consisted of a series of long, two-story brick buildings that faced inward to a courtyard with benches where people gathered to talk and children played. Over the years, many journalists have listed me as growing up in the Houston Heights area, but it was actually San Felipe Courts. The Heights was more upscale than my family could afford.

We were poor people, but living in the projects, we really didn't know it because we were all in the same boat. Our apartment had two bedrooms upstairs, one downstairs, and a kitchen. We basically had a revolving door with people always coming and going; as the older kids moved out, the younger kids came in. I was closest to my sister Barbara, who was two years older than me. The problem was that she beat me up every day of my life. Finally, the day I reached the breaking point, I had her by her hair and was banging her head on the fridge door. Thank God my dad walked in when he did or I would have killed her. Barbara could be both my best friend and my worst enemy.

My brother, Lelan, was ten years older and was gone all the time. Lelan was really slick, smooth talking, a very sharp dresser with his hair slicked back, and one thing was for sure — he knew the streets. Lelan left home at seventeen. My sister, Geraldine, was thirteen at the time, and my sister, Barbara, was nine. My younger brother Billy was four, and Roy was just a baby. At this point the twins, Randy and Sandy, weren't born, but we knew with Mom and Dad, more were coming.

No matter what age we were, our parents would send us outside to play. They had no worries about us being harmed by strangers. We played all over that area of town with no fears. Seems hard to imagine now, and I regret, for most kids today, both that loss of innocence and that loss of freedom.

Prior to the time the city built San Felipe Courts, the Fourth Ward area had been primarily African American, including Freedmen's Town, so named because freed slaves had populated it in the late 1800s. The land was cheap because much of it was low swampland prone to flooding. Initially, there were rumors that African Americans were going to be included in parts of this public housing, but after the Courts were built, the city put up a fence between the Courts and what was left of the black section. At that young age, I didn't know why people were separated or even think to ask. It was just the way things were. I'm sure there must have been some bad feelings among the African Americans about that fence, but I never felt any hostility. I spent quite a bit of time in the black section, going to the friendly, always welcoming Italian store, Lanzo's Grocery, for my mom or cutting through the yards on my way to school, and my memories were of friendly faces, elderly people sitting on their porches and waving as I passed. I'd like to think I've always been color-blind, and my relationship with the people in the black neighborhood next to San Felipe Courts is probably the reason. I can only speak for my family, but in our case, we were all poor people and felt a certain kinship.

Parents know their families are poor, but kids don't until rich kids at school notice. And they did notice and were quick to make fun. My defense was developing a lifelong habit of blocking out painful memories. Not too long ago, though, I got a letter from a grade school friend that brought back one very hurtful moment. Her name was Mary Gwynne Davidson (now Ridout) and we were in the first grade together. She remembered me as someone who kept to himself and was very quiet and very polite. And very self-conscious, I might add.

The occasion that Mary Gwynne remembered was an event in Mrs. Monk's first grade called May Fete. The tradition was that each girl got to pick a boy as her May Fete partner. For a six-year-old, this was a big deal, and Mary has been kind enough to let me share her letter here:

It was April of 1944 in Mrs. Monk's first-grade class at Wharton Elementary School in Houston, Texas.

We were lined up girls in alphabetical order. The teacher had given us instruction for the girls to select their May Fete partner. My last name was Davidson so I was close to the beginning of the line, which gave me a pretty good position. I remember clearly that I selected Walton Elson for my partner.

I then watched as one by one the other girls selected their partners. It became very clear to me that a shy blond boy was going to be the last choice. The girls in the line had begun to snicker and talk about Kenny as he didn't have any shoes and wore black-and-white-striped overalls. Kids can be so cruel.

I watched as Kenny fidgeted and tried to not show his embarrassment. He was very polite and kept up a brave front, even with all the snickering. His mannerism was very gentle. I began to try to imagine how he must have felt. It hurt!

Kenny was from a family of nine or ten children and lived in a tenement district in Houston called San Felipe Courts. He helped his mother support his brothers and sisters by selling newspapers on the street corner and doing odd jobs that a young lad could do. In his adult life Kenny's mom moved to Crosby, Texas, where Kenny built an adult center where seniors could go and socialize and enjoy life. I understand he provided everything they might need to enjoy their leisure time together and that he also provided for food for the needy in the community.

In 1962 I ran into Kenny again at a little place called "The Coffee House" on Bellaire Blvd. across from the Shamrock Hilton Hotel. He was playing bass fiddle with the Bobby Doyle Trio. Bobby played piano and sang, but that night Bobby had a really bad cold and in the middle of a song he stopped and said, "I have punished my throat and my audience enough. We will now find out if these other guys can sing . . . Kenny, it's your turn." When Kenny sang, I knew he "HAD IT." Yes, he had what it takes to make it because Kenny is none other than Kenny Rogers, my old May Fete partner and friend.

Wishing you well . . . you deserve it. I've always admired you . . . your classmate and friend.

It did hurt. It took Mary's letter to jar my memory about this particular incident, but I never forgot the pain.