NPR stories about The Antidote 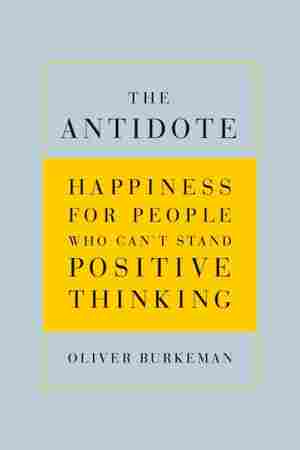 November 13, 2012 • In his new book, Oliver Burkeman shuns motivational seminars and the power of positive thinking in favor of uncertainty, insecurity and even pessimism. "Trying to let [negative] feelings be and not always struggling to stamp them out is a more fruitful alternative," he says.

When Trying to Control the Future Doesn't Work

Future, n. That period of time in which our affairs prosper, our friends are true and our happiness is assured.

In 1996, a twenty-eight-year-old from Indiana named Christopher Kayes signed up with an adventure travel company to go trekking in the Himalayas. His intention, though it would prove ironic in hindsight, was to take a relaxing break. A punishing career as a stockbroker, and then as a corporate consultant, had left him burned out. Kayes had always been interested in the psychology of the business world, and so he had decided to pursue a doctorate in organisational behaviour instead. But first he needed time off, and when he saw an advertisement in a travel magazine for a group hiking expedition to Nepal, it seemed like the perfect answer. As the plane descended into Kathmandu, he recalled later, he was looking forward to 'a refreshing immersion in Nepalese culture', surrounded by the beauty of the Himalayas. But what Kayes encountered in the mountains was a troubling psychological puzzle that was to dominate his life for years to come.

While Kayes and his fellow hikers were exploring the foothills of Mount Everest, camping at night in tents, a disaster of historical proportions was unfolding near the mountain's peak. Fifteen climbers died on Everest during that year's climbing season, eight of them during a single twenty-four-hour period that has since entered mountaineering lore, thanks largely to the bestselling book Into Thin Air, by the climber and journalist Jon Krakauer, who was among those on the mountain at the time. Kayes himself encountered some of the climbers and rescue workers who had been involved — exhausted men, emerging dazed into the foothills, struggling to make sense of what had happened.

Even in the modern era of commercial Everest expeditions, when anyone with sufficient money and some climbing skills can pay to be escorted to the summit, it's still not that unusual for people to die in the attempt. What made the 1996 disaster so chilling — apart from the sheer number of dead — was the fact that it seemed uniquely inexplicable. The weather on the peak was not more perilous than usual. There were no sudden avalanches during the period when most of the climbers perished. The paying customers were all sufficiently skilled for the undertaking. Into Thin Air, controversially, attributed the tragedy in part to the stubbornness and arrogance of Anatoli Boukreev, a Kazakhstani climbing guide. There is some evidence for this, but it is ultimately dissatisfying as an explanation, too. Mountaineers, as a group, tend towards stubbornness and arrogance. Yet disasters on the scale of Everest in 1996 are mercifully rare.

In the end, what happened that year looked more like an outbreak of mass irrationality — an episode that reached its apogee around noon on 10 May at the Hillary Step, a wall of rock just 720 feet from the summit, in an event that has since become known as 'the traffic jam'. Teams from New Zealand, the United States and Taiwan — thirty-four climbers in total — were all attempting the final stage of the ascent that day, from Camp Four, at 26,000 feet, to the summit, at 29,000 feet. The Americans and New Zealanders had co-ordinated their efforts, so as to ensure a smooth progression up and down the mountain. But the Taiwanese climbers were reneging on an agreement not to climb the same day, and an advance team of guides had failed to secure safety ropes at the Hillary Step according to plan, with the result that the smooth progression soon turned into a bottleneck.

Timing is one of the most important variables in any assault on Everest, and so climbers generally observe strict 'turnaround times'. Leaving Camp Four at midnight, a climber can hope to reach the summit by midday, or soon after. But if he or she fails to make it there by the pre-arranged turnaround time — which might be anywhere from noon until two in the afternoon, depending on weather conditions, and the team leader's attitude to risk — it becomes essential to call off the attempt and turn back. Failure to do so means the climber risks running out of bottled oxygen and facing Everest's most dangerous weather in the dark. Yet confronted with the traffic jam at the Hillary Step, the teams pushed on, disregarding their turnaround times. Back at Camp Four, the American mountaineer Ed Viesturs watched the climbers' slow progress through a telescope, and found it hard to believe what he was seeing. 'They've already been climbing for hours, and they still aren't on the summit,' he remembered thinking to himself, with rising alarm. 'Why haven't they turned around?'

Members of all three teams continued arriving at the summit for two hours after two o'clock, the latest safe turnaround time. Doug Hansen, a postal service worker from Washington state who was a paying client of the New Zealand group, was the last to do so, at the astonishingly late time of just after four o'clock. He had ascended Everest the year before, but had been forced to turn back a few hundred feet from the top. This time, he never made it back down. Like seven others, he was caught in intense blizzards as darkness fell, which made navigation of the mountain impossible, and sent temperatures plunging to -40°F. They lay dying, unreached by the frantic rescue attempts that saved several other climbers' lives. Years after climbing Everest had become a feasible project for amateurs as well as professionals, 1996 saw the highest recorded death toll in the mountain's history. And even today, nobody clearly understands why.

Except, just possibly, Chris Kayes. A former stockbroker turned expert on organisational behaviour might seem to have little to contribute to the post-mortem of a mountaineering disaster. But the more Kayes learned of what had happened, and as he continued to follow the case after returning home, the more it reminded him of a phenomenon he had witnessed all too frequently among businesspeople. The Everest climbers, Kayes suspected, had been 'lured into destruction by their passion for goals'. His hypothesis was that the more they fixated on the endpoint — a successful summiting of the mountain — the more that goal became not just an external target but a part of their own identities, of their senses of themselves as accomplished guides or high-achieving amateurs. If his hunch about the climbers was right, it would have become progressively more difficult for them to sacrifice their goal, despite accumulating evidence that it was becoming a suicidal one. Indeed, that accumulating evidence, Kayes was convinced, would have hardened the climbers' determination not to turn back. The climb would have become a struggle not merely to reach the summit, but to preserve their sense of identity. In theology, the term 'theodicy' refers to the effort to maintain belief in a benevolent god, despite the prevalence of evil in the world; the phrase is occasionally used to describe the effort to maintain any belief in the face of contradictory evidence. Borrowing that language, Chris Kayes termed the syndrome he had identified 'goalodicy'.