Showcases the triumphs and defeats of 500 years of Western cultural history, highlighting the contributions of women and arguing that decadence is required in order to spark creativity in the next era.

NPR stories about From Dawn to Decadence 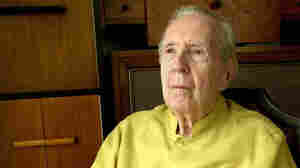 Pioneering cultural historian Jacques Barzun was the author of dozens of books and essays on everything from philosophy to music to baseball. He died Thursday in San Antonio at the age of 104. Eric Gay/AP hide caption

October 26, 2012 • Barzun authored dozens of books and essays on everything from philosophy to music to baseball. He died Thursday, just one month shy of his 105th birthday. "I don't know anybody who had such a Renaissance mind," says his friend and colleague, Prof. Henry Graff.

Excerpt: From Dawn To Decadence 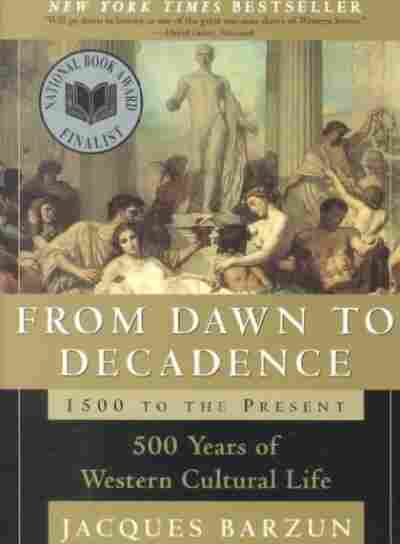 500 Years of Western Cultural Life 1500 to the Present

The Modern Era begins, characteristically, with a revolution. It is commonly called the Protestant Reformation, but the train of events starting early in the 16C and ending-if indeed it has ended-more than a century later has all the features of a revolution. I take these to be: the violent transfer of power and property in the name of an idea.

We have got into the habit of calling too many things revolutions. Given a new device or practice that changes our homely habits, we exclaim: "revolutionary!" But revolutions change more than personal habits or a widespread practice. They give culture a new face. Between the great upheaval of the 1500s and the present, only three later ones are of the same order. True, the history books give the name to a dozen or more such violent events, but in these uprisings it was only the violence that was great. They were but local aftershocks of one or other of the four main quakes: the 16C religious revolution; the 17C monarchical revolution; the liberal, individualist "French" revolution that straddles the 18th and 19th; and the 20C "Russian," social and collectivist.

The quotation marks around French and Russian are meant to show that those names are only conventional. The whole western world was brooding over the Idea of each before it exploded into war, and the usual dates 1789 and 1917 mark only the trigger incidents. It took decades for the four to work out their first intention and side effects-and their ruling ideas have not ceased to act.

One must speak of the West as being torn apart in the 16C because Europe would be inexact. Europe is the peninsula that juts out from the great mass of Asia without a break and is ridiculously called a continent. In the 16C revolution only the westernmost part of that peninsula was affected: from Germany, Poland, Austria, and Italy to the Atlantic Ocean. The Balkans belonged to the Moslem Turks and Russia was Orthodox Christian, not Catholic. For the West, in this clearly defined sense, it would be convenient to say "the Occident."

To call the first of the four revolutions religious is also inadequate. It did indeed cause millions to change the forms of their worship and the conception of their destiny. But it did much besides. It posed the issue of diversity of opinion as well as of faith. It fostered new feelings of nationhood. It raised the status of the vernacular languages. It changed attitudes toward work, art, and human failings. It deprived the West of its ancestral sense of unity and common descent. Lastly but less immediately, by emigration to the new world overseas, it brought an extraordinary enlargement of die meaning of West and the power of its civilization.

When the miner's son from Saxony, Luther, Lhuder, Lutter, or Lotharius as he was variously known, posted his 95 propositions on the door of All Saints' church at Wittenberg on October 31, 1517, the last thing he wanted to do was to break up his church, the Catholic (= "universal"), and divide his world into warring camps.

Nor was he performing an unusual act. He was a monk and professor of theology at the newly founded university of Wittenberg (where Hamlet later studied), and it was common practice for clerics to start a debate in this fashion. The equivalent today would be to publish a provocative article in a learned journal. A German scholar has recently argued that Luther never posted his theses. Whether he did or not, they circulated quickly; he had made copies and sent them to friends, who recopied and passed them on. Soon, Luther had the uneasy surprise of receiving them back from South Germany, printed.

This little fact is telling. Luther's hope of reform might have foundered like many others of the previous 200 years, had it not been for the invention of printing. Gutenberg's movable type, already in use for some 40 years, was the physical instrument that tore the West asunder. But one point about the new technc is worth noting: the printing press by itself was not enough: better paper, a modified ink, and a body of experienced craftsmen were also needed to make type a power. Pamphlets could now be produced quickly, accurately, in quantity, and, compared to manuscript copies, cheaply.

Many of the Protestant tracts were illustrated with woodcuts, by Cranach, Dürer, and other leading artists, which helped propaganda by attracting the illiterate: their friends read them the text. No longer always in Latin for clerics only, but in one of the common tongues, the 16C literature of biblical argument and foul invective began what we now call the popularization of ideas through the first of the mass media.

Some notion of the force wielded by this new artifact, "the book," may be gathered from the estimate that by the first year of the 16C, 40,000 separate editions of all kinds of works had been issued-roughly nine million volumes from more than a hundred presses. During the Protestant struggle some towns had half a dozen firms working day and night, their messengers leaving every few hours with batches of sheets under their cloaks, the ink hardly dry, for delivery to safe distributors-the first underground press. [The book to browse in is: The Coming of the Book by Lucien Febvre and Jean Martin.]

If Luther had no thought of setting off a revolution, what was his aim? He only wanted to elicit the truth about the sacrament of penance." An innocent question, but timely, because of the current sale of "indulgences." These were a sort of certified check drawn by the pope on the"treasury of merit accumulated by the saints." In popular belief, buying one enabled the holder to finesse penance and shorten his or her time in Purgatory--or that of a friend or relative. Luther wanted to know whether any substitute for true remorse and active penance could be bought in the open market. He thought the only treasure of the church was the gospel.

Many besides Luther had felt true piety and wanted to worship sincerely, not buy their way into heaven. One form of awakened faith was significantly called devotio moderna.The formation of groups like the Brothers of the Common Life, the founding of new grammar schools, works such as The Imitation of Christ by Thomas A Kempis, and the spontaneous attitude of ordinary folk showed that the work of earlier reformers was bearing fruit.

These reformers had been many. From Wycliff in 14th-century England to John Huss in Bohemia in the 15th, heroic attempts had been made to "go back to the primitive church," the humble early Christians, whose only church was their elected overseers. For them the gospel had been enough and so it should still be.Continues...