An Unorthodox Hall of Fame

by Franklin Foer and Marc Tracy

With contributions from celebrated Jewish writers including David Remnick, Jonathan Safran Foer and Dahlia Lithwick, Jewish Jocks provides an overview of the most influential Jewish figures in sports, from Howard Cosell to Sandy Koufax. 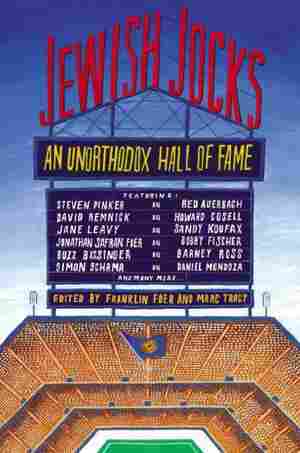 November 23, 2012 • Talking about Jews in sports touches a "very central place in the Jewish psyche," says Franklin Foer. He and co-editor Marc Tracy have compiled an "unorthodox hall of fame" celebrating Jewish contributions to American athletics.

The first Jewish Jocks were traitors to the faith. Across ancient Palestine, the Greeks had planted gymnasia, so that they'd have places to roll around naked. To win admittance into these clubs, Jews would crumple their penises into their foreskins and hold them in place with sutures. If that weren't transgression enough, the pregame ceremony for these wrestling matches entailed tossing incense at the feet of idols and singing anthems in their honor. Perhaps this explains why one book of the Maccabees describes the construction of a Jerusalem sports stadium in the same breath as intermarriage: both were "evil ways."

Jewish ambivalence over sports continued through the ages. Rabbis might occasionally extol physical vigor, but those pronouncements revealed an unspoken hostility. The Talmud urges fathers to teach their sons to swim, but only so they don't drown; the good old doctor Maimonides put in a plug for regular exercise, but he pointedly said nothing to encourage competition. It was the goyim who played ball, and the rabbis who sensed that sports were a gateway to assimilation. Not that the Gentiles wanted to let Jewish Jocks into their games. The great medieval tournaments, the ultimate sports spectacle of that era, excluded Jews when the organizers were in a benevolent mood. In Rome and Sicily, the Italians mounted their Jewish neighbors like horses and rode them in mock jousts.

When Jews talked about sports, in other words, they were really talking about Jewish survival. And it took the arrival of Zionism for Jews to finally develop a coherent response, a program that called for the creation of Musklejudentum (muscle Jews). A little pioneer work in the Galilee, with perhaps some calisthenics in the morning and soccer in the afternoon, would turn them into beefcake whom no Cossack would mess with.

It was a nice idea, but it didn't entirely solve the problem. Even in America, where there's every reason to feel comfortably at home, the anxiety over sports persists: namely, the fear that we aren't terribly good at it. This anxiety is the grist for an overworked subgenre of Jewish humor, and it is one reason that while watching sports or reading about it, American Jews perform the strange, strained ritual of attempting to identify the Jews on the field: Is that Epstein on the offensive line really, you know, an Epstein?

But maybe Jews would feel differently if they knew that, as much as Hollywood, modern sports are a product of the Jewish imagination.

When the immigrants from eastern Europe flooded New York City in the early twentieth century, they were greeted by the Manhattan equivalent of the old Hellenizers: the German-Jewish aristocrats, those Loebs and Schiffs, who had long ago secured a nice place for themselves within the WASP establishment. The German Jews hoped a little bit of athletics might make the young immigrants less hunched and pale — or pathetic and embarrassing — than their shtetl-born fathers. So they invested a sliver of their fortunes in settlement houses and community centers, which often housed large, well-equipped gymnasia. By 1942, an unpublished government memorandum on immigrant life in New York, discovered by the historian Peter Levine, noted that Jews had more gyms "than any other group."

If the German Jews were eager to remake the young Jews as jocks, the young Jews were clamoring to be remade. But even when they played American games, they played them differently. The Jews might not be the most robust physical specimens, but they were certainly clever. They could beat you with their fakes and their slipperiness; they played with finesse rather than physicality. You could read these descriptions, which were de rigueur in the (gentile) press, as flattering testaments to the intelligence of the Jewish people, or you could espy an ugly subtext that the likes of Henry Ford would explicitly blurt out.

Still, it was hard to argue with the trophy cases. In early-twentieth-century America, city dwelling was the quintessential mode of life; the quintessential city was New York; and the quintessential New Yorkers were Jews. That meant that the urban sports of boxing and basketball were bound to take off, and that when they did, Jews would already be there to ferry their arrival into the big time. Between the two world wars, there were twenty-six Jewish boxing champions, including two of the greatest fighters of the era, Benny Leonard and Barney Ross. Even after the Jewish boxer mostly disappeared, Jews remained as the sport's paramount trainers and journalists, as well as the owners of the company, Everlast, that manufactured all the gear. And basketball was a majority-owned subsidiary of New York Jewish culture, which supplied many of the stars, more of the important minds, and even a style of play, the City Game, that was created to allow smarter, shorter players to triumph over bigger, brawnier ones. The City Game's emphasis on relentless motion and constant passing emerged as the template for the modern playbook.

This pattern was repeated across sports that didn't even have urban pedigrees. Take football. It was two Jews — Benny Friedman and Sid Luckman — who invented the quarterback position as we know it, the guy who orchestrates the offense and flings the ball (a pigskin, no less!) down the field. It was the San Diego Chargers' Sid Gilman and his assistant Al Davis who refined the passing game and, along the way, helped create the archetype of the film-room obsessive. Which is to say nothing of the Jews who created the modern players' union; the journalism and broadcast apparatus, which turned sports into full-fledged mass culture spectacle; and fantasy sports, which transformed the experience of fandom.

Jewish Jocks is, of course, a Jewish joke, but not in the way you might have thought. Benny Leonard, Sid Luckman, Hank Greenberg, Dolph Schayes, Sandy Koufax, Mark Spitz: they were no jokes (and around some of them, you wouldn't have wanted to imply otherwise). Nor are they, despite their physical prowess and appearance, best understood as anomalies. Their stories are no less in keeping with the many-times-told tale of exceptional diaspora Jews' restless entanglement within their host cultures than are those of Louis B. Mayer, I.B. Singer, George Gershwin, Gloria Steinem, Richard Feynman, Serge Gainsbourg, Natalie Portman, Rahm Emanuel, and the Ramones.

The joke, rather, is that our pantheon includes people who, in some cases, couldn't even run the bases: the gangster who helped fix the World Series; the idealistic ping-pong player; the nerdy general manager. They get to be counted too: not only as Jews, which is perhaps the most obvious thing about them, but as Jocks, which perhaps isn't.

American Jews have narrated their own success story, of how they triumphed in a meritocracy of brains; and the history of the Jewish Jock is entirely consistent with this. These men and women utilized the talents long prized by a people of the book (and a people of commerce) to game these games to their advantage, in turn forcing the rest of the world either to copy their methods or be left on the outside looking in.

This book was born in a world far from the settlement houses, and also far from the modern stadium. We both come from the same place — the same Washington neighborhoods of lawyers and federal bureaucrats; the same synagogue; the same progressive, heavily Jewish day school with a grasshopper for a mascot and no football team. And we both became journalists with primary focuses outside of sports. Yet, as we suspect will be the case for many of this book's readers, the subject of Jews and sports was almost always at the forefront of our minds — and why not? It would be as absurd to ask us to enjoy sports without engaging our Jewishness as it would be to ask us to live our lives without engaging our love of sports. So we have gone ahead and made Howard Cosell a Jewish Jock. If you want to blast that out of the park, be warned: it's our curveball, the only kind we know how to throw — in part because, when we were kids, we never did learn the traditional kind.