The acclaimed author of the His Dark Materials trilogy presents mature and scholarly retellings of 50 favorite and lesser-known fairy tales on the 200th anniversary of the Grimm brothers' Children's and Household Tales, in a volume that includes such stories as "Cinderella," "Rapunzel" and "Briar-Rose." 30,000 first printing.

NPR stories about Fairy Tales From The Brothers Grimm 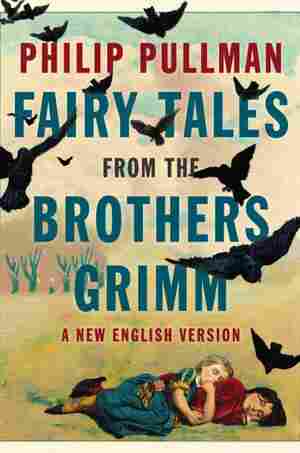 10 Eye-Catching Reads For The Book Lover On Your List

December 11, 2012 • Gift books should be special: arrestingly visual, deeply felt, quirky, comprehensive, important. We've combed the shelves to bring you several such suggestions, guaranteed to put a sparkle in the eyes of any big reader.

November 6, 2012 • Two hundred years after the Brothers Grimm published their first collection of fairy tales, Philip Pullman, author of The Golden Compass, revisits "Hansel and Gretel," "The Frog Prince" and other original Grimm stories in his latest book, Fairy Tales from the Brothers Grimm.

The Frog King, or Iron Heinrich

In the olden days, when wishing still worked, there lived a king whose daughters were all beautiful; but the youngest daughter was so lovely that even the sun, who has seen many things, was struck with wonder every time he shone on her face. Not far away from the king's palace there was a deep dark forest, and under a lime tree in the forest there was a well. In the heat of the day the princess used to go into the forest and sit by the edge of the well, from which a marvellous coolness seemed to flow.

To pass the time she had a golden ball, which she used to throw up in the air and catch. It was her favourite game. Now one day it happened that she threw it a little carelessly, and she couldn't catch it. Instead the ball rolled away from her and towards the well, and then it ran right over the edge and disappeared.

The princess ran after it, and looked down into the water; but it was so deep that she couldn't see the ball. She couldn't even see the bottom of the well.

She began to cry, and she cried louder and louder, inconsolably. But as she wept and sobbed, someone spoke to her. "What's the matter, princess? You're crying so bitterly, you'd move a stone to pity."

She looked round to see where the voice was coming from, and saw a frog who'd stuck his big ugly head out of the water.

"Oh, it's you, you old splasher," she said. "I'm crying because my golden ball's fallen into the water and it's so deep and I can't see it."

"Well, you can stop crying now," said the frog. "I can help you, but what will you give me if I fetch your ball for you?"

"Whatever you want, frog! Anything! My clothes, my pearls, my jewels, even the golden crown I'm wearing."

"I don't want your clothes, and your jewels and your golden crown are no good to me, but if you love me and take me as your companion and your playmate, if you let me sit next to you at the table and eat from your dish and drink from your cup and sleep in your bed, then I'll dive down and bring up your golden ball."

The princess thought "What is this stupid frog saying? Whatever he thinks, he'll have to stay in the water where he belongs. But still, perhaps he can get my ball." But of course she didn't say that. Instead she said "Yes, yes, I'll promise you all of that if you just bring my ball back."

As soon as the frog heard her say "Yes" he put his head under the water and dived to the bottom. A moment later he came swimming back up with the ball in his mouth, and he threw it on to the grass.

The princess was so happy to see it that she snatched it up and ran off at once.

But she took no notice. She hurried home and forgot all about the poor frog, who had to go back down into his well.

Next day the princess was sitting at table with her father the king and all the people of the court, and eating off her golden plate, when something came hopping up the marble steps: plip plop, plip plop. When it reached the top it knocked at the door and called: "Princess! Youngest princess! Open the door for me!"

She ran to see who it was, and opened the door, and there was the frog.

Frightened, she slammed the door shut at once and ran back to the table.

The king saw that her heart was pounding, and said "What are you afraid of, my child? Is there a giant there at the door?"

"What does the frog want with you?"

"Oh papa, yesterday when I was playing in the forest near the well, my golden ball fell in the water. And I started to cry and because I was crying so much the frog got it for me, and because he insisted, I had to promise that he could be my companion. But I didn't think he'd ever leave the water, not really. But there he is outside the door and he wants to come in!"

And then there came a second knock at the door, and a voice called:

The king said "If you make a promise, you have to keep it. Go and let him in."

She opened the door and the frog hopped in. He hopped all the way to her chair.

So she lifted the frog up. When he was on the chair, he wanted to be on the table, so she had to lift him up there as well, and then he said "Push your golden plate a bit closer so I can eat with you."

She did, but everyone could see that she wasn't enjoying it. The frog was, though; he ate her food up with great pleasure, while every mouthful seemed to stick in the princess's throat.

Finally the frog said "Well, I've had enough now, thank you, I'd like to go to bed. Carry me up to your room and get your silken bed ready so we can sleep in it."

The princess began to cry, because the frog's cold skin frightened her. She trembled at the thought of him in her sweet clean bed. But the king frowned and said "You shouldn't despise someone who helped you when you were in trouble!"

She picked the frog up between finger and thumb and set him down outside her bedroom door.

But he kept on knocking and called "Let me in! Let me in!"

So she opened the door and said "All right! You can come in, but you must sleep on the floor."

She made him lie down at the foot of her bed. But still he said "Let me up! Let me up! I'm just as tired as you."

"Oh, for goodness' sake!" she said, and picked him up and put him at the far end of her pillow.

But that was too much. In a flash of anger she scooped up the frog and threw him against the wall. But when he fell back into the bed, what a surprise! He wasn't a frog any more. In fact he'd become a young man – a prince – with beautiful smiling eyes.

And she loved him and accepted him as her companion, just as the king would have wished. The prince told her that an evil witch had put a spell on him, and that only she, the princess, could have rescued him from the well. What's more, on the following day a carriage would come to take them to the prince's kingdom. Then they fell asleep side by side.

And next morning no sooner had the sun awoken them than a carriage drew up outside the palace, just as the prince had said. It was pulled by eight horses with ostrich plumes nodding on their heads and golden chains shining among their harness. At the back of the coach was Faithful Heinrich. He was the prince's servant, and when he'd learned that his master had been changed into a frog, he was so dismayed that he went straight to the blacksmith and ordered three iron bands to put around his heart to stop it bursting with grief.

Faithful Heinrich helped them into the carriage and took his place at the back. He was overjoyed to see the prince again.

When they'd gone a little way, the prince heard a loud crack from behind. He turned around and called out:

"Heinrich, the coach is breaking!"

And twice more they heard the same cracking noise, and each time they thought it was the carriage, but each time they were wrong: it was an iron band breaking away from Faithful Heinrich's heart, because his master was safe again.