The Life of an Eccentric in an Age of Change

Athanasius Kircher, the legendary 17th-century priest-scientist, was either a genius or a raving lunatic. This fascinating portrait traces his rise, success and eventual fall.

NPR stories about A Man of Misconceptions 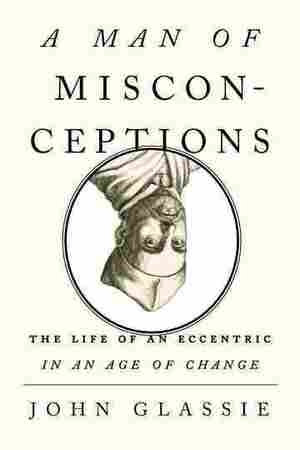 November 18, 2012 • Athanasius Kircher, a 17th-century Jesuit priest, was a renaissance man in name and deed. He strove to learn about almost everything. Unfortunately, many of his inventions and theories were pure nonsense. John Glassie writes about Kircher in his new book, A Man of Misconceptions.

Excerpt: A Man Of Misconceptions

According to the memoir of Athanasius Kircher, even the circumstances of his birth were auspicious. And in a sense they were, if you choose, as he did, to leave out the witch hunt.

Kircher's mother was "the daughter of an upright citizen," his father a learned man with "expertise in expounding complicated matters." They lived in a hilltop town called Geisa, part of the old principality of Fulda, in a valley of the gentle and green Rhön Mountains. (Fulda was also the name of the small city at the center of the principality; the trip there from Geisa took about three hours on foot.) For a long time before Kircher was born in 1602, his parents were caught up in the conflict that had disrupted northern Europe since 1517, when Martin Luther nailed his ninety-five theses to the door of the Castle Church in Wittenberg. Catholics and the new Lutherans felt the special kind of hatred for each other that comes from a split within the same religion, as did the Catholics and the Calvinists, the followers of John Calvin.

The effects of the Reformation were especially ugly in the Holy Roman Empire of the German Nation — neither Holy, nor Roman, nor an Empire, as Voltaire would later say. It was more like an agglomeration, to use his word, of three hundred more or less autonomous entities loosely organized under the auspices of the Hapsburgs in Vienna, relatives of the king who controlled Spain, Portugal, the kingdom of Naples, the duchy of Milan, and a great deal of the new world. The Holy Roman Empire, such as it was, included feudal lands, secular territories, free cities, Catholic abbeys, and prince-bishoprics with many overlapping interests and internal faith-based animosities.

Kircher's father worked as a magistrate under the ruling Catholic prince of Fulda, a man named Balthasar von Dernbach. In 1576, as Kircher described it, the prince was "driven out by the persecution of heretics into exile." The "heretics" who threw him out of office and drove him all of three miles away were mainly Lutherans fed up with von Dernbach's effort to re-Catholicize the region, which included throwing Lutherans out of office and installing people like Kircher's father in their place. Although Kircher's father "favored Balthasar's most just cause and defended him with all his might against the attacking heretics," he too was "vexed by the persecution of the heretics," to say nothing of "the insolence of the heretics," and was forced to leave his post.

Von Dernbach and his lawyers spent twenty-six years building the case for his reinstatement, which finally occurred in 1602, near the feast day of Saint Athanasius, who himself had been forced into exile for staunchly defending orthodox Christianity against a powerful heretical sect. The birth of the ninth Kircher child on this feast day, so close to such an important occasion, meant that the child would get an important-sounding name: Athanasius comes from the Greek word for "immortal"; Kircher is a variation on the German for "church."

From a modern point of view, daily life in Geisa had a harshness and a reek about it regardless. Although Kircher's family probably lived in the kind of half-timbered house that now evokes Old World charm, they also lived within short range of their animals and their own waste. Unsanitary conditions were exacerbated by the fact that, as one historian has put it, "Westerners at this time looked on water with great suspicion," though, given the number of waterborne diseases, they were probably right to.

The family's house was steps away from Geisa's market square, at the top of the long hill that led to the center of the town. The variety of available goods must have been fairly limited. People lived chiefly on soups, porridges, hard brown bread, and some meat, though Catholics ate fish and vegetables on fast days, particularly during Lent. When Kircher was a boy, potatoes, coffee, tea, tobacco, chocolate, and corn, not to mention the fork, were very likely unknown to him. (By the time he died, he had become an advocate of tea from China as treatment for kidney stones and hangovers.)

Despite the difficulties inherent in the way of life, the hilltop town of Geisa, overlooking the valley of the Ulster River, would have been a pleasant place to grow up. And from an early age, as might be expected of a boy who would later call himself "master of a hundred arts," Kircher displayed a "not ordinary aptitude" for learning. This was thought to go along with his somewhat earthy complexion, his dark skin and dark hair, coloring believed to indicate an excess of black bile, called melancholia. Melancholic types were said to be pensive, dreamy, and intellectual, suited to deep study and the attainment of knowledge, even capable of genius. Moreover, Kircher's head was large, generally agreed to suggest, as one seventeenth-century writer put it, "a wonderful intellect and a most tenacious memory." Kircher's father, a scholar of philosophy, theology, and rhetoric, who kept "thousands of books," apparently took an aging parent's interest in his youngest, most promising child. As his older sons "entered orders of various religions and daughters were joined in matrimony," old Kircher taught the boy music, Latin, and the fundamentals of geography — or as Kircher later described it, the study of "the world according to its divisions."

When not receiving lessons from his father, or from a rabbi his father hired to teach him Hebrew, he seems to have received attention from above. Young Kircher was athletic but accident-prone, a bit of an absentminded professor even as a boy, and sometimes he got into the kind of trouble that, he claimed, only the Virgin Mary could get him out of.

One hot summer day, he and some friends walked down to the bottom of the hill to cool off in the river. "It happened that in the midst of a certain mill house, the course of the river, in the manner of a lofty waterfall, was fl owing with a more swift current because of the colossal trough of the mill wheel," he recalled. "Carried to this trough by boyish ignorance and snatched up with the current, I was completely incapable of resisting the force, and now closer and closer to the wheel, with the name of Jesus and the customary prayer to Mary, I trembled at the danger of death and the grinding of my entire body."

The friends who saw him being "snatched beneath the wheel headlong" all gave up on his survival, "especially since the wheel missed the bottom of the channel by so little that my body would scarcely be able to sustain itself without the pulverizing of all my limbs." When they finally found him downstream they were hardly able to believe their eyes: "By the singular protection of God and the Virgin Mary I emerged safe from the other side in such a way that no sign of harm was apparent on me." Having been "restored thus by divine mercy" to them, Kircher rejoiced with his friends and they all "acknowledged the apparent miracle."