The Color of Christ explores the dynamic nature of Christ worship in the U.S., addressing how his image has been visually remade to champion the causes of white supremacists and civil rights leaders alike, and why the idea of a white Christ has endured.

NPR stories about The Color of Christ 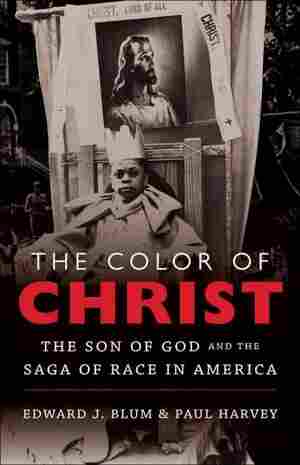 November 19, 2012 • What did Jesus look like? In their new book, The Color of Christ, Edward J. Blum and Paul Harvey explore how different groups have claimed Jesus as their own — and how depictions of Jesus have both inspired civil rights crusades, and been used to justify the violence of white supremacists.

Excerpt: The Color Of Christ

In a world filled with images of Jesus, this one made headlines. He stood in a stained-glass window wearing a simple white robe and a dark tunic. He held a staff in his left hand and with the knuckles of his right tapped gently on a large brown door. Wavy auburn hair fell to his shoulders, while his feet were bare. When sunlight struck the glass just so, kindness radiated from his white face and warmth from his brown eyes. This was a comforting Jesus who forgave sinners, blessed bread for the hungry, and promised peace to the anxious. For decades he had been with this black congregation in Birmingham, Alabama. But on one Sunday morning in September 1963, terror struck. Dynamite set by white supremacists outside of Sixteenth Street Baptist Church just after 10:20 a.m. exploded, and the face of Jesus shattered into a thousand shards of glass. In the blink of an eye, the prince of peace was made a casualty of race war.

At Sixteenth Street Baptist Church that morning, the children had heard a Sunday school lesson on "the love that forgives." Four little girls were then in the basement lounge to freshen up. Denise McNair was the youngest. She was eleven years old and had thick straight hair that fell below her shoulders. Addie Mae Collins was fourteen, wore glasses most of the time, and kept her hair short. Carol Robertson and Cynthia Wesley were fourteen too. Carol's hair was longer, like Denise's; Cynthia had a smile that beamed with joy.

But on that day, they died. Their lives were cut short because segregationists despised the aspirations of African Americans to vote, purchase homes, protect themselves, and receive fair treatment in the courts. They died, too, because they were at church that morning to worship Jesus. Jesus had lived in the window for decades. He had listened as the congregation sang about his love, his sacrifice, and his triumph. He had been their good shepherd who heard their stories and shared their sufferings.

He had been a white sacred figure who inspired his black followers to rally against white supremacy in the early civil rights crusade, but now his face was gone. The place where it had shone was reduced to a gaping scar.

The holy face had become a hole in the wall; four little girls were dead; and throughout the United States and the world people had to make sense of what seemed so senseless. What did it all mean, and where was Jesus?

The bomb struck on Anne Moody's twenty-third birthday. She was in Mississippi eating breakfast with her family when the radio broadcast carried the news. Anne rushed out of her home in fury. "Now talk to me, God," she demanded. "Come on down and talk to me." She was tired of the Lord Almighty, and her spiritual disgust was stoked by a sense of similarity with the deceased. "You know, I used to go to Sunday school when I was a little girl ... and I believed in you. I bet you those girls in Sunday school were being taught the same as I was when I was their age ... Are you going to forgive their killers? You not gonna answer me, God, hmm? Well, if you don't want to talk, then listen to me." It was the end of Moody's faith in nonviolence and the end of her faith in the Lord too. She kept praying, though, to the God she no longer believed in. The color of God would determine her level of rage. "I know you must be white," she fumed. "And if I ever find out you are white, then I'm through with you. And if I find out you are black, I'll try my best to kill you when I get to heaven."

Jesus had his face blown out just three weeks after the epic March on Washington, when Martin Luther King Jr. had shared his "dream" of a day when "little black boys and black girls will be able to join hands with little white boys and white girls as sisters and brothers." Now in Birmingham for the funerals, King had to explain why these little girls would never hold hands with anyone again. He had to explain why they were martyrs not for the content of their character but for the color of their skin. He told a crowd of thousands that these "children — unoffending, innocent, and beautiful — were the victims of one of the most vicious and tragic crimes ever perpetrated against humanity." They died "nobly" as "martyred heroines." "They did not die in vain," King proclaimed. He encouraged the congregants to take heart that God could make good from evil: "If one will hold on, he will discover that God walks with him, and that God is able to lift you from the fatigue of despair to the buoyancy of hope, and transform dark and desolate valleys into sunlit paths of inner peace."

As always, King was eloquent and affirming. He loved and believed in the power of Jesus, as did those little girls. Yet King was impotent. He could not bring them back.

In mourning, the poets cried and the singers wailed. Langston Hughes lamented:

Four little girls
Who went to Sunday School that day
And never came back home at all —
But left instead
Their blood upon the wall.

Joan Baez, the emerging star of folk music, sang about the limits of song:

John Coltrane had no words, but his melodically piercing tune "Alabama" rhythmically moved in time with King's eulogy. The rumble of the drums mixed with a turbulently unsettled piano line as the tenor saxophonist's blowing summoned listeners to depths they could never vocalize.

The fate of these girls was tragic; the meaning of what happened to Jesus was complicated. He could be resurrected to fill the hole in the sanctuary and somehow the holes in many hearts. But what was the meaning of his destruction, and how should he be replaced? In New York City, two of America's best-known thinkers debated what it meant for the white Jesus of a black church to have his face blown out. Theologian Reinhold Niebuhr and novelist and essayist James Baldwin addressed this question: "Does the missing face on this stained-glass window which survived the bombing suggest a meaning?" Through a visual representation of Christ's body and what happened to it, they explored the deepest questions of American society, God's justice, and the workings of evil.

The inability of whites to respect human rights left Niebuhr frustrated. He had spent his career as a pastor, writer, and professor grappling with the ethical dilemmas of modern society. He had become one of the nation's most popular theologians, providing guidance to Americans high and low. Powerful politicians sought his insights, while recovering alcoholics prayed his prayers as they took their twelve steps. But Niebuhr had little to offer now. The faceless white Christ meant that the white church had lost face. "As far as the church is concerned, it represents a failure," Niebuhr sighed. He found light a scarce resource in those dark days, and neither the serenity prayer nor the ethical understanding of moral men living in an immoral society seemed to bring him comfort.