A refugee of the Vietnam War seeks a new life in Quebec, but encounters new challenges when her younger son is diagnosed with autism. Translated by Sheila Fischman. 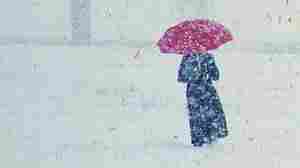 November 24, 2012 • Kim Thuy based her award-winning novel Ru on her own experiences as a refugee from war-torn Vietnam. She says the word "ru" has a poetic double meaning: In archaic French, it means a rill or stream, but in Vietnamese, it means a lullaby to soothe a child.

In French, ru means a small stream and, figuratively,

a flow, a discharge—of tears, of blood, of money.

In Vietnamese, ru means a lullaby, to lull.

I came into the world during the Tet Offensive,

in the early days of the Year of the Monkey,

when the long chains of firecrackers draped in front

of houses exploded polyphonically along with the

I first saw the light of day in Saigon, where

firecrackers, fragmented into a thousand shreds,

coloured the ground red like the petals of cherry

blossoms or like the blood of the two million soldiers

deployed and scattered throughout the villages and

cities of a Vietnam that had been ripped in two.

I was born in the shadow of skies adorned with

through with rockets and missiles. The purpose

of my birth was to replace lives that had been lost.

My life's duty was to prolong that of my mother.

My name is Nguyen An Tịnh, my mother's

name is Nguyen An Tınh. My name is simply

a variation on hers because a single dot under the i

differentiates, distinguishes, dissociates me from her.

I was an extension of her, even in the meaning of

my name. In Vietnamese, hers means "peaceful

environment" and mine "peaceful interior." With

those almost interchangeable names, my mother

confirmed that I was the sequel to her, that I would

The History of Vietnam, written with a capital H,

on our names into the water when it took us across

the Gulf of Siam thirty years ago. It also stripped our

names of their meaning, reducing them to sounds

at once strange, and strange to the French language.

In particular, when I was ten years old it ended my

role as an extension of my mother.

Because of our exile, my children have never been

extensions of me, of my history. Their names

are Pascal and Henri, and they don't look like me.

They have hair that's lighter in colour than mine,

white skin, thick eyelashes. I did not experience the

natural feelings of motherhood I'd expected when

they were clamped onto my breasts at 3 a.m., in the

middle of the night. The maternal instinct came to

me much later, over the course of sleepless nights,

Only then did I understand the love of the mother

sitting across from me in the hold of our boat,

the head of the baby in her arms covered with

foul-smelling scabies. That image was before my

eyes for days and maybe nights as well. The small

bulb hanging from a wire attached to a rusty nail

spread a feeble, unchanging light. Deep inside the

boat there was no distinction between day and night.

The constant illumination protected us from the

vastness of the sea and the sky all around us.

The people sitting on deck told us there was no

boundary between the blue of the sky and the blue

of the sea. No one knew if we were heading for

the heavens or plunging into the water's depths.

Heaven and hell embraced in the belly of our

boat. Heaven promised a turning point in our lives,

a new future, a new history. Hell, though, displayed

our fears: fear of pirates, fear of starvation, fear

of poisoning by biscuits soaked in motor oil, fear of

running out of water, fear of being unable to stand

up, fear of having to urinate in the red pot that was

passed from hand to hand, fear that the scabies on the

foot on solid ground, fear of never again seeing the

faces of our parents, who were sitting in the darkness

From Ru by Kim Thuy. English translation copyright 2012 by Sheila Fischman. Excerpted by permission of Random House of Canada Limited.