by Agatha Christie and Mathew Prichard

Told in never-before-published letters and photos taken from the Queen of Mystery's very own archives, this exciting travelogue, steeped in history and illustrated with photos, postcards, newspaper clippings and memorabilia, documents her eye-opening yearlong voyage around the British Empire in 1922.

NPR stories about The Grand Tour 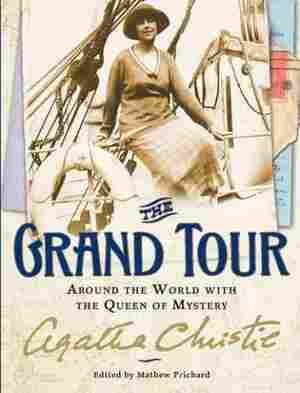 November 27, 2012 • Before Agatha Christie wrote Death on the Nile or Murder on the Orient Express, she took her own, less perilous, journey around the world in 1922. Her grandson Mathew Prichard has now published a volume of her letters and photographs from the trip.

By an extraordinary coincidence, it is 20 January 2012 when I sit down to begin writing the introduction to my grandparents' participation in the British Empire Exhibition Mission, known as the Grand Tour, which my grandmother, Agatha Christie, brought so vividly to life in the letters and photographs she sent back to her family. The tour left on 20 January 1922, exactly 90 years ago today.

I called my grandmother Nima, presumably a first childish attempt at 'Grandma', and through force of habit I will use this family name in this piece, although of course the events she chronicled took place many years before I was born!

We have to be grateful that these wonderful letters have survived at all. It has been a continual frustration to me, in browsing through family memorabilia, that there are quite a few lovely letters from well-known (and not so well-known) people to Nima, but far fewer of her own letters, which by definition are in the hands of the people to whom she wrote. Fortunately in this case, however, her mother, to whom she wrote the most frequently, did keep the letters; when she sadly died three or four years later, presumably Nima reclaimed them, for they have survived with the rest of the material left by what was, I can promise you, a prolific letter-writing family! As you will see, it was a marvellous bonus to read all the letters for the first time a year or two ago, to see the brief addresses, and to leaf through the old black-and-white photographs, painstakingly pasted into a couple of old photograph albums.

It goes without saying that the world we live in has changed out of all recognition in those 90 years – some would say particularly the places visited on the Empire Tour: South Africa, Australia, New Zealand, Hawaii, and Canada. Not only have the countries changed, but the way we communicate, the way we do business, the way we behave as families — indeed the whole social environment in which people like my grandparents existed has changed so much that it is almost unrecognizable. I think some of the circumstances surrounding the Tour and the people involved would probably have been regarded as fairly eccentric even by their contemporaries, but even so, I think the changes are still very remarkable.

For instance, apart from my grandparents, the chief character concerned, one Major E. A. Belcher, whose last job before initiating this tour was Controller of the Supplies of Potatoes, was obviously a seriously eccentric and difficult man, whose unpredictability and inefficiency sorely tried my grandparents throughout the whole tour. One suspects that his friend and colleagues must have breathed a sigh of relief when they heard that he planned to be out of the country for 10 months! Certainly, however, somebody retained some confidence in him, for the expenses of the trip were considerable — four to seven people's upkeep for 10 months (minus a month's holiday for my grandparents), 'free' passage on ships all the way round the world, 'free' internal travel in each of the countries, not to mention the fees paid to Belcher and my grandfather Archie. At the end of this book I have recorded some evidence about the 1924 British Empire Exhibition. But at the end of the day, who are we to complain — we have gained a charming, perceptive and unconsciously revealing document concerning life shortly after the First World War, written by an author whose gift for storytelling remains second to none from that time to this.

It is worth dwelling for a while on communication. The only methods of communication used by members of the Tour appear to be letters or the occasional necessarily brief telegram. Not only no emails, but no telephones – in other words no immediate form of communication which, for instance, Nima could use to be reassured about the well-being of her two-year-old daughter Rosalind. Letters had to travel by the same means as the tour – by ship! And it appears that in either direction they took weeks or months to arrive, although within its own limitations the system worked very well. Even locally, communications were difficult, which made the keeping of itineraries and timetables challenging, to say the least. Worse, the difficulties of long distance communication meant Nima and Archie knew before they set out that they would in essence be completely separated from their daughter for 10 months.

From a family point of view Nima and Archie's decision to accompany Belcher on the Grand Tour was brave considering their precarious financial position at the time. I suspect their decision to go arose from Archie's restlessness and dissatisfaction with his current job (a position which might not be kept open for his return); coupled with Nima's passionate desire to see the world, and her suspicion that marriage to a businessman with two weeks' holiday a year would make further opportunities for such adventures non-existent. Sitting at my desk, and reviewing in my mind Nima's life-long love of travel, which took her at various times to the Middle East, North Africa, Sri Lanka, America, the West Indies – sometimes with her family in tow – it is hard to remember that forward vision was not available to her in 1922. She could not see her life spreading out before her, and who are we to blame such a passionate and enthusiastic person for taking what she thought was her one and only chance to see the far end of the world, whatever the financial risks and despite the certainty that she would miss her daughter dreadfully. It is also true to say that 'family support systems', including in Nima's case, a mother, a sister and servants, were much more available and accepted than they are now.

So, Nima and Archie set off and what follows in this book is a completely spontaneous outpouring of wonder at the different people, scenery and events that unfolded before them as they went. Some of what they saw, such as the Victoria Falls, Table Mountain and Sydney Harbour, are still there, though much developed. Much more poignant to me (for I have visited all three cities) were the pictures of Hobart, Wellington, and particularly Cathedral Square in Christchurch, New Zealand. The first two are completely unrecognizable from the buzzing cities you see today. A simple black-and-white picture overwhelms me with a powerful sense of natural elegance and beauty, and, I confess, with a sense of guilt and regret that progress has meant the destruction of something so intrinsically valuable. Christchurch, of course, suffered a devastating earthquake in 2011, but I suspect that if a 1922 resident could see how the city has developed over the intervening decades, he or she would mourn the urban developments almost as poignantly.